THE BEST EARLY CHRISTMAS PRESENT FOR SLEAZE ROCK FANS THIS YEAR HAS TO BE CRASHDÏET ANNOUNCING THEIR RETURN WITH NEW LEAD VOCALIST GABRIEL KEYES. AFTER A THREE YEAR ABSENCE, CRASHDÏET ARE BACK TO ADD ANOTHER CHAPTER TO THEIR ALMOST MYTHICAL LIKE STORY. CRASHDÏET HAVE A SPECIAL PLACE IN SLEAZE ROXX’S HEART AS THE GROUP’S DEBUT EP WAS THE FIRST EVER ALBUM SENT TO SLEAZE ROXX FOR REVIEW 15 YEARS AGO. SLEAZE ROXX CAUGHT UP WITH CRASHDÏET’S NEW SINGER GABRIEL KEYES TO FIND OUT ABOUT HOW HE BECAME THE NEW SINGER, WHAT HE IS LOOKING FORWARD TO AND MORE! 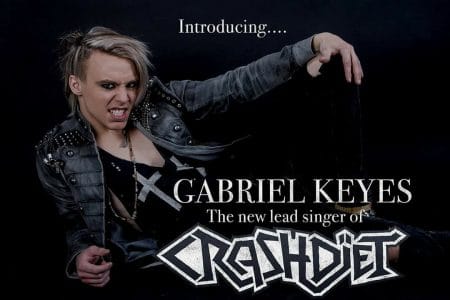 Sleaze Roxx: Congratulations on being the new singer for Crashdïet! You must be very excited about it!

Gabriel Keyes: Yes! I’m really excited! It’s like a childhood dream for me so I’m just so fucking excited! I just want to get it going. Get out on the road and kick some ass!

Sleaze Roxx: I guess that there were no auditions that were publicized so how did you become the new singer?

Gabriel Keyes: Actually, it was our manager. He manages a band and the guitarist in that band, he actually sent me a message on Messenger — Facebook — and told me, “Crashdïet is searching for a new singer and you’re one of the candidates. Are you interested?” Bla, bla, bla. And I was like, “Yeah!” So then I got in touch with Sven [of SEM Music Management] and then he told me to like record something. So I recorded a Skid Row song. I think it was “Big Guns” and then I sent it to him, and he sent it to Martin [Sweet]. He liked it so after that, we met up over a coffee. We talked and you know, about the whole thing, the situation about the band, and the plans and stuff. And then, after that, I met Martin at his place and we started to write music and it felt like we had a good chemistry from the beginning so we clicked very good.

Sleaze Roxx: Cool! So when did this take place?

Gabriel Keyes: It was actually… Oh. let me think. I think that it was in April. It was a very long process.

Sleaze Roxx: Was it difficult to keep this secret?

Gabriel Keyes: Yeah, you know. It was actually. But you know, of course I told my family, my brother… Yeah. It was really hard to keep the secret because I just wanted to tell everybody ’cause I was so excited about it.

Sleaze Roxx: You mentioned that you started writing music with Martin so were you part of the writing process for the new album from beginning to end?

Gabriel Keyes: Yeah. Actually, now we’re just releasing our single [“We Are The Legion” which will be released on New Year’s Eve] and after that, I don’t know when we’re going to start to record the whole album. Right now, it’s only the single and maybe a music video but you know, we don’t know right now. But yeah, I was part of the writing process.

Sleaze Roxx: So that means the new album is not ready yet?

Sleaze Roxx: I noticed that you already have some various shows booked including your first one in [Stockholm] Sweden at the end of March but you’re also coming to the States for the Rock N Skull Festival. Will this be your… 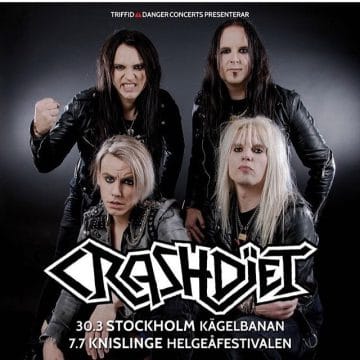 Gabriel Keyes: I didn’t know that!

[Interviewer’s note: In all fairness to Gabriel, the Rock N Skull Festival had just announced that Crashdïet would be playing its 2018 edition in the early morning hours for Sweden and the interview took place later that day]

Sleaze Roxx: Will this be your first time abroad?

Gabriel Keyes: Yeah, yeah, yeah. You know, I’ve been in the States before but it’s the first time playing there so it’s exciting!

Sleaze Roxx: Can you tell me about the first time that you played with the guys [Martin Sweet, Peter London and Eric Young]. How did it feel?

Sleaze Roxx: Do you know how many other people that they were considering for the position?

Gabriel Keyes: You mean what my influences are or…

Sleaze Roxx: Were you in any bands in the past?

Gabriel Keyes: I was actually in a band called Perfect Crime before from Stockholm that I formed with my brother and another guitarist from Sweden. I think that the band is still around but there’s only one guy in it so I don’t know so much about it. We were playing two, three years together. We had some shows in Stockholm at Harry [B] James and stuff like that. We released an EP in… I think it was in 2014. It was called ‘Wanted’ but they are not available anymore online. 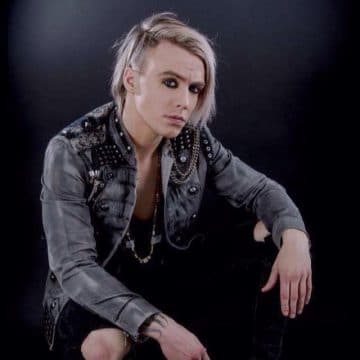 Sleaze Roxx: Why did you end up leaving that band?

Gabriel Keyes: ‘Cause we couldn’t get along — me, the guitarist and my brother. I think that everybody was like on a different level for what we wanted to play and what we wanted to do so it was that kind of situation. After that, I was so tired of everything so I had long black hair before. I just cut it off and I was like — I was lost for awhile. I didn’t know which way to go. I didn’t know which identity that I had or something but now I feel more like myself again. I’m back [laughs]!

Sleaze Roxx: [Laughs] That’s awesome. Were you a Crashdïet fan before joining the band?

Sleaze Roxx: What’s your favorite album from the band?

Gabriel Keyes: It’s hard to tell you know. Everybody asks me that but you know, I like all the albums. Maybe not all the songs but it’s hard to just pick one ’cause I think that all of the albums are fucking masterpieces. But I think ‘Generation Wild’ was the album that made me really listen to the band so if I pick one, I pick ‘Generation Wild.’

Sleaze Roxx: Obviously, there’s some pressure in having to follow up all the other singers that the band has had. How do you feel about that?

Sleaze Roxx: What are the songs that you look forward to playing the most?

Gabriel Keyes: There’s so many songs. Like all of them [laughs]. 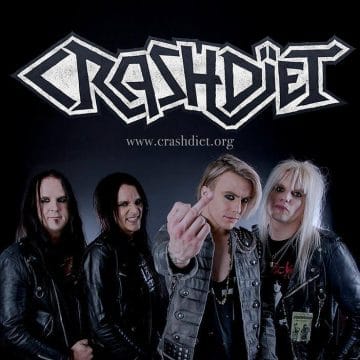 Sleaze Roxx: Had you ever met the guys before April 2017?

Gabriel Keyes: Yeah. I actually met Simon [Cruz, the last singer for Crashdïet] two to three times. And Martin, maybe once, just like “Hi” and keep walking forward but not more than that.

Sleaze Roxx: What are you looking forward the most for 2018?

Gabriel Keyes: Hmmm. Perhaps touring of course. I just want to go out there and show what I can do and show everybody that I am a guy that they can count on.

Sleaze Roxx: Cool! Do you have any last words to share with the Crashdïet fans?

Gabriel Keyes: Stay tuned ’cause we have a lot of big news coming up!

Sleaze Roxx: Last question for you… What are your three favorite albums of all-time and why?

Gabriel Keyes: Hmmm. First, Bryan Adams’ ‘Reckless.’ It’s just a fucking great album. There’s so many great songs on that album and I think that it was the breakthrough album for Bryan so I don’t know. I love it so fucking much! Such great songs!

Sleaze Roxx: I agree. And your next one?

Gabriel Keyes: Hmmm. ‘Slave To The Grind’ by Skid Row. I love the vocals.

Sleaze Roxx: You did send them [Crashdïet] a Skid Row song at the beginning!

Gabriel Keyes: Yeah. I am the biggest Skid Row fan ever I think.

Gabriel Keyes: But now, I am the biggest Skid Row fan of the Sebastian [Bach] era. Not so much right now. I haven’t listened to them like the new album so I don’t know so much actually.

Gabriel Keyes: Hmmm. Let me see. There’s so many albums to choose between [long pause]. I don’t want to say ‘Appetite For Destruction’ [by Guns N’ Roses] because that’s just so obvious. ‘Crimson Idol’ with W.A.S.P.

Sleaze Roxx: That’s a good one.

Sleaze Roxx: And why do you like it so much?

Gabriel Keyes: Great songs and the songs have like a story behind them.