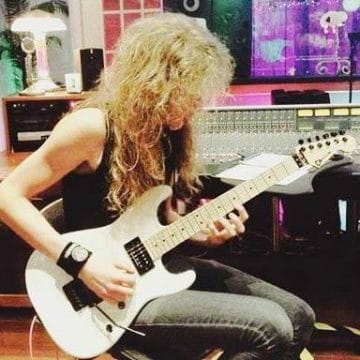 Denman are more aggressive, more technical, and more ’80s based than any of those bands. Because of their purity to form, they have garnered one of the biggest local followings in one of the world’s toughest musical markets. The band is a four piece consisting of Ben Denman on guitar and vocals, his brother Dakota Denman on guitar, Ted Karol on drums and Robbie Crede on bass. Sleaze Roxx spoke with guitarist Dakota Denman about his love for music; working with the likes of Michael Wagener, Mark Slaughter and Enuff Z’Nuff; and, the band’s plans for the future.

Sleaze Roxx: Tell us a bit about your early musical experiences and what led you to create the kind of music you create.

Dakota Denman: Basically, my Dad got my brother Ben and I really into Van Halen. When we were young kids, we used to see him playing along to the first couple records of theirs. We loved Van Halen and were like, “What else is out there?” and then we fell in love with Metallica. Then we listened to tons of Metallica and then we got into Mötley Crüe. We just kept finding band after band in that same time period. We kept searching and finding new stuff and it just so happened that all the stuff we found that we like was ’80s.

Sleaze Roxx: You went to high school in the 2000s. Was it difficult to like the kind of music you did given what was popular at the time?

Dakota Denman: We went to a really tiny high school. Our graduating class was like 70 or so kids. I guess we were kinda the odd guys out. But we liked what we liked and we loved playing guitar. We didn’t let anyone tell us what we should or shouldn’t like. We just stuck to it. 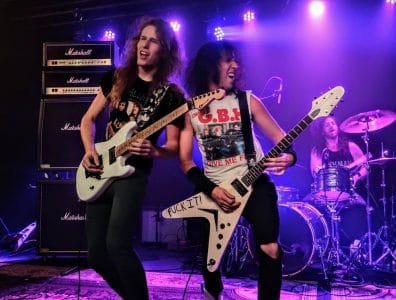 Sleaze Roxx: What brought you and your brother to Nashville?

Dakota Denman: When you think of music places, there are three different cities that come up — New York City, Los Angeles and Nashville. New York was super expensive and LA was super far away, but we had a relative who lived here in Nashville at the time so we just rented out a room from her and found we really liked it and decided to stay.

Sleaze Roxx: How did you start to work with your producer, Michael Wagener? What is like working with him?

Dakota Denman: Man, Michael’s the man. I first met Michael through guitarist Jeremy Asbrock at one of the shows that Thee Rock N Roll Residency was holding, back when they were still playing at Dan McGuinness in the mid-town area. I just had a ten minute conversation with Michael on George Lynch and Dokken and how Lynch was one of my big influences as a guitar player. We had a good time talking, so he handed me his business card and said, “Here’s my card. You should come check out the studio sometime.” So I did and we just stayed in touch. I eventually ended up sending him a bunch of demos. When we finished up our first batch of demos for our band, he chose us to record in his production workshop. We did one song with him — “High Heels And Leather” — which was our first single, and six months later we recorded a few more songs and finished up an EP.

Sleaze Roxx: Mark Slaughter also appears on your new EP. How did that come about?

Dakota Denman: I first met Mark super briefly at one of Thee Rock N Roll Residency shows. Him and Michael are really tight though, and we have a song called “Miles Away From Home” which called for some really big vocal harmonies. So, Michael said to me, “Let me call and see if Mark’s in town.” So he calls Mark and says, “Hey Mark, I’m recording this band. Do you wanna do some harmonies?” And Mark says, “Yeah, sounds great. I’ll see you tomorrow.” He came down to the studio and sang his vocal parts and did an amazing job. He was super cool to us. We shot a little video with him in the Camaro that a lot of people have seen. He’s just a really, really cool guy. We ended up shooting the album cover in his backyard with photographer Chad Lee. Mark lit the pyro for it, so that was pretty cool!

Mark Slaughter came in to do back up vocals on the new Denman EP. October 2016. Wireworld studio with Michael Wagener

Sleaze Roxx: What is the songwriting process like in Denman?

Dakota Denman: There’s no set songwriting process for the band. Usually though, Ben and I will jam together and write a riff. After we write the riff, we’ll piece together the different parts of the song based around that one riff. Then we’ll record it all and we’ll get the guys to come over to lay down drums and bass. We’ll work out a vocal melody last. Sometimes when we’re at our rehearsal spot, we get a killer idea and we’ll work a song out right there on the spot, all four of us together, and record it after the fact. But there’s no set rule on how we write.

Sleaze Roxx: You played guitar for Enuff Z’Nuff for a couple shows. How did that come up and how was that experience for? 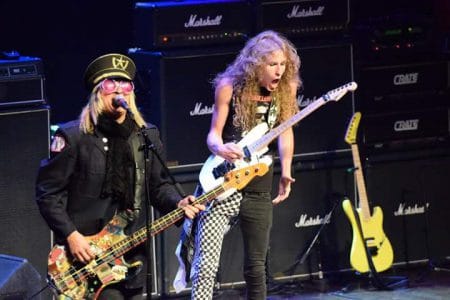 Dakota Denman: Playing with Enuff Z’Nuff was a ton of fun. Tory Stoffregen, their current guitar player, saw me play at an event called Rare Hare, which is a hair metal cover show that Tyson Leslie puts on here in Nashville. He thought I was good, obviously I guess, because when he was looking for a guitarist to fill in for him on some gigs, he asked me to do it for him. He was looking for someone that could cover for him on some gigs he couldn’t do and asked a couple people and they all referred me. So I come home late one night and I see a Facebook message from Tory saying, “Hey man, wanna cover some gigs for me?” I was like, “Yeah, sure!”

So I went and did a gig in Wisconsin with them. Then we went to Illinois and played with Kix and Vince Neil and that was awesome. Sold out show, something like 2,000 people, just awesome. Kix is one of my all time favorites and obviously Mötley Crüe is too, so honestly, the entire thing was like a dream come true. I got to hang out with the dudes in Kix and got to talk with Vince Neil super briefly. Here I was, hanging out with these dudes, playing guitar with them and getting paid for it. It was freakin’ rad! It was an awesome experience and I loved every minute of it. 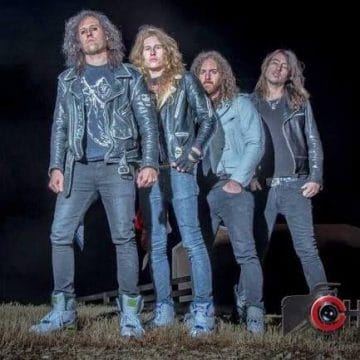 Sleaze Roxx: What are your thoughts on the modern rock scene?

Dakota Denman: Man, that’s a tough one. Some stuff I like, some stuff I don’t. Sometimes when driving around in my car, I tune into the modern rock station. Some of those bands, you can tell are trying to have an old school feel, and some of these bands, I just don’t understand because it’s so different to me. It’s really mixed for me, but I’m glad that a lot of bands are starting to play rippin’ guitar solos again, because for a while, that was really non-existent.

What comes around goes around, though. It’ll come back around. Bands like Steel Panther and Airbourne are straight up old school and everybody loves them. I think it’s all cyclical. It all has to go through the circle. Eventally, people are gonna get sick of the same cookie-cutter repetitive stuff people hear on the radio all the time and people are gonna discover new bands that sound old school, bands like Beasto Blanco and Denman. People are gonna come back to bands with that good heavy metal sound. It’s coming back around, baby.

Sleaze Roxx: What’s next on the horizon for Denman?

Dakota Denman: We have 13 songs that are done right now and we’re working on finishing a few more, so we’ll have like 15 or 16 songs after all is said and done. We’re gonna pick nine or ten, record a full length album, put out a couple videos and then try 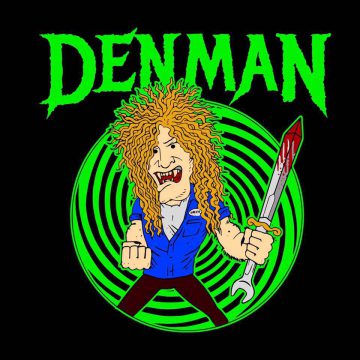 Sleaze Roxx: And, last question, what is your advice for the kids out there starting bands?

Dakota Denman: The big thing is to put your head down and keep trucking along. It’s easy to get discouraged when you feel like you’re not getting enough really good gigs lined up, but it takes a long time. You’ve got to get the right 15 to 20 songs that you’re playing out live. You’ve got to keep building. It’s like a big snowball. You need to make a bunch of videos. The more videos you make, the more people see your stuff, but it takes a while to put a bunch of videos out. To get where you have a solid following takes like three or four years of constantly playing out, putting out videos and writing songs. It’s a long process before it starts to really pay off. But you need to keep your eye on the prize and keep going for it because it’s gonna pay off.

Sleaze Roxx: Great advice. Thank you so much for taking the time to chat!

Dakota Denman: Thanks for having me! Rock on, dude!