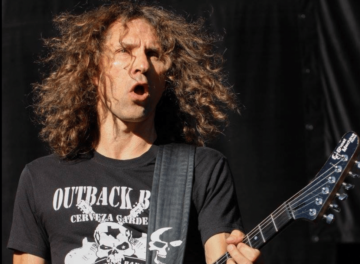 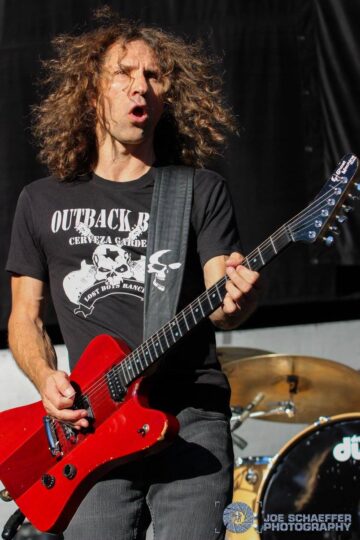 BACK IN APRIL 2022, DIRTY LOOKS CONSISTING OF ‘ORIGINAL’ MEMBERS — PAUL LIDEL (LEAD GUITAR), JACK PYERS (BASS) AND GENE BARTLETT (DRUMS) — ALONG WITH JASON MCMASTER (LEAD VOCALS) AND DAVID BEESON (RHYTHM GUITAR) HINTED THAT THEY WOULD BE RELEASING A NEW LIVE ALBUM. IT TURNED OUT TO BE THE RECENTLY RELEASED LIVE CD/DVD TITLED ‘COOL FROM THE SPEEDWAY’ WHICH COMMEMORATES DIRTY LOOKS’ FIRST SHOW SINCE 2011, WHICH TOOK PLACE AT THE SELINSGROVE SPEEDWAY IN SELINSGROVE, PENN, USA BACK ON SEPT. 28, 2021. SLEAZE ROXX CAUGHT UP WITH LIDEL TO FIND OUT MORE ABOUT THE NEW LIVE CD/DVD, WHICH CAN BE PURCHASED VIA DIRTY LOOKS OR PERRIS RECORDS.

Sleaze Roxx: The new Dirty Looks’ CD/DVD ‘Cool From The Speedway‘ was quite the surprise! When did you guys think of recording the reunion show and releasing it?

Paul Lidel: When we originally planned to do the show, it was going to be a one off, and I wasn’t sure when, if ever, it would happen again. So I suggested that we hire a camera crew just to document the night, so that we would have something to remember it by. It turned out that the show went great, everyone played really well, and it was recorded off the soundboard. So what started off as just a memento of the night for just us to have, became a really good sounding and looking DVD of this very special night.

Sleaze Roxx: I love the album title because it captures so well Dirty Looks through the ‘Cool’ part as well as the venue that you guys ended up recording the live album at. Who came up with the album title and if there were any others in the running, what were they?

Paul Lidel: The title was Gene’s idea, I don’t think any other titles were brought up other than ‘Live at Selinsgrove Speedway’ or something like that. I like the title and I like the cover art that they did with the checkered flag.

Sleaze Roxx: How was the Dirty Looks reunion show last summer at The Speedway? Did it meet your expectations? Paul Lidel: The show went much better than I had even hoped for. The show was originally scheduled for mid-March of 2020, which of course was right when the pandemic hit. Jack and Gene came to Austin at the beginning of March 2020 to rehearse, and I was very pleasantly surprised at how well rehearsal went. It all felt very natural, like no time had passed since the three of us last played together. But then in March, everything shut down and we had to wait another year and a half for the show. We rehearsed in Selinsgrove before the Speedway show, so we got the songs pretty tight. The crowd was amazing! You could feel the energy, and that made us just play harder. I’ve played many thousands of shows over the years, but that night was one of my most memorable ones. I’m really glad that it got recorded and videoed!

Sleaze Roxx: Obviously, the big change in the line-up was that Jason McMaster was handling the lead vocals rather than Henrik Ostergaard. First off, how was it performing as Dirty Looks without Henrik in the line-up?

Paul Lidel: Henrik was one of a kind and Jason would be the first one to tell you that no one could fill his shoes. However, Henrik did tell me once that if he had to take a take a hiatus from the band, that Jason would be the one he would want to fill in. Jason has always been a huge fan of Dirty Looks, and Henrik and Jason always had a great deal of mutual respect for one another. In fact, Henrik would often invite Jason onstage to sing with us, and in my seven years with the band, I don’t recall him inviting anyone else. Everyone who was at the show or has heard the live ‘Speedway’ album agrees that Jason did a fantastic job.  Instead of trying to sound just like Henrik, Jason captures the spirit and intensity that Henrik had. He really sounds great singing these songs.

Sleaze Roxx: And how did it feel playing live again with Jack and Gene? How long had it been since the three of you were playing live together? 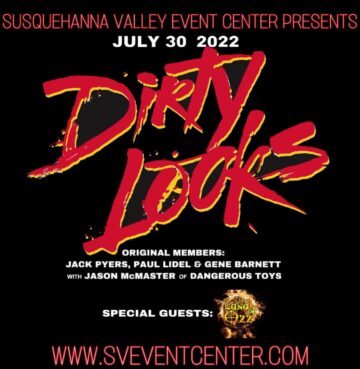 Paul Lidel: It had been 30 years since Jack, Gene and myself had played onstage together, but to me it felt like no time had passed at all. When we got together to rehearse in 2020, I was amazed at how powerful it still was and was reminded what a great rhythm section they are. The feel and vibe of Gene’s drumming is such a huge part of the band’s overall sound, and no one could ever hold down the low end like Jack. It was really great to get to play with them again, I think that we definitely have a chemistry together.

Sleaze Roxx: Perhaps fittingly, you needed two people to replace Henrik since you also had David Beeson on guitar at the Speedway show. How did you guys end up getting David to play and how did it feel playing live in Dirty Looks as a five-piece.

Paul Lidel: Getting David was a complete no brainer. He’s not only a great player but he is also one of the biggest Dirty Looks fans I know, and he already knew all the songs. He and Jason actually formed a Dirty Looks tribute band about 15 years ago to play at my birthday party at a club in Austin! It was just obvious that David would be perfect for the job. It felt very natural playing as a five piece. I’ve been playing shows standing next to Jason for the last 28 years so it felt very comfortable.

Sleaze Roxx: The setlist for the Speedway show ended up being from only two albums in Dirty Looks’ discography with ten tracks from ‘Cool From The Wire’ (1988) and seven from ‘Turn of The Screw’ (1989). How did you guys come up with the setlist for that show and why not play a few tracks from some of the other Dirty Looks albums.

Paul Lidel: We wanted to play the most popular songs, the songs that the most people would know. The most popular Dirty Looks albums are ‘Cool From The Wire’ and ‘Turn of The Screw’ so we chose songs from them. It’s difficult picking songs for the live set. No matter what songs you choose, there will be always someone who wishes you included other songs.

Sleaze Roxx: I like that there is also a DVD with the live release. What prompted you guys to include a DVD as well?

Paul Lidel: After we played the show, we got a ton of comments asking if the show was recorded, and asking if there was any video. So we took the footage that the camera crew shot, along with some great fan footage, and had it edited into live videos for each song. I think it turned out to be a really cool representation of the show, which will be appreciated by those who were there, and by those who would have liked to be there. The CD/DVD is available at DirtyLooksMusic.com.

Sleaze Roxx: Has there been any consideration to the current Dirty Looks line-up writing and releasing new material?

Paul Lidel: We get asked that a lot, and the idea has been brought up. I guess we’ll have to wait and see. On one hand, some people might not want to hear new Dirty Looks music without Henrik. On the other hand, there are a lot of people who would 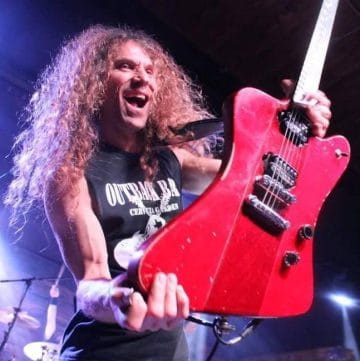 like to hear what the current line-up might come up with. In a way, it would help to immortalize Henrik, and possibly have a new generation become aware of the band and the older albums. I think if we did, the songs would be pretty cool, and I feel that the band as it is, is very strong.

Sleaze Roxx: Are you aware of any Dirty Looks material with Henrik that has not yet been released that could surface some day?

Paul Lidel: There is none that I’m aware of. As far as I know, everything that was finished has been released.

Sleaze Roxx: What are the future plans for Dirty Looks’ revamped line-up?

Paul Lidel: We will return to Selinsgrove this summer on July 30th at the Susquehanna Events Center, and also play the night before on July 29th at the 2300 Arena in Philadelphia as part of the [BLE] Masquerade festival. We have also been invited to play the Monsters of Rock Cruise in April of 2023.

Sleaze Roxx: It seems that things have been a bit quiet for 99 Crimes in the last year. What’s going on with 99 Crimes? 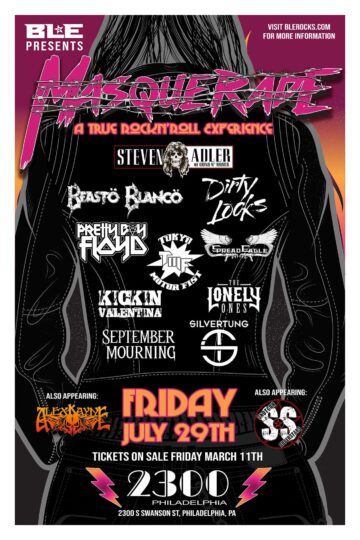 Paul Lidel: 99 Crimes is on hiatus right now. We didn’t see each other much during the pandemic and now everyone is busy with other projects. I hope to fire it back up sometime in the future.

Sleaze Roxx: Since your last Sleaze Roxx interview, the Covid pandemic reared its ugly head and caused havoc throughout the music industry and particularly the concert industry. You are an active musician playing lots of live shows. How did the Covid pandemic impact you as a musician and in terms of your livelihood?

Paul Lidel: I was fortunate to not be as affected as some other musicians. I have been teaching guitar, piano, bass, voice and drums for many years. Before the pandemic, I mostly taught in person lessons with only a few students online using Zoom or Skype. During the pandemic, students became more open to trying lessons on Zoom and discovered that online lessons were actually better in some ways than in person lessons. Students don’t have to leave their house, they can practice immediately after their lesson and they get a video of the lesson to help them remember details. So now instead of being limited to local students, I have students from all over the country and even now with the pandemic lifting, I still teach exclusively online. The pandemic also gave me the time to create guitar instruction videos and start a YouTube guitar instruction channel.

Sleaze Roxx: I see that you have been keeping busy with the 80’s cover band LC Rocks. When did that band form and what are the songs that usually make it onto your setlist? 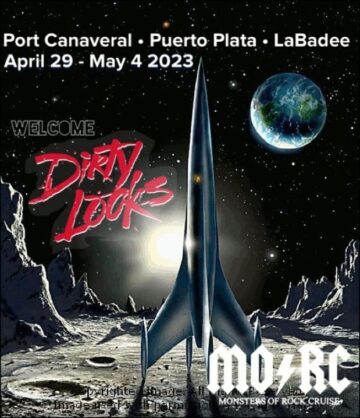 Paul Lidel: LC Rocks has been one of the most popular bands in the Austin [Texas, USA] area for the last 20 years. It was started by the singer Matt Bray — who also mixed the new live Dirty Looks album — who is an absolutely world class singer. Before I joined the band, I used to go to see them all the time. They are all great players and great guys, and it’s really fun playing with them. We play songs from a lot of my favorite hard rock bands from the 70’s and 80’s like Van Halen, Ozzy, Led Zeppelin, Scorpions, Aerosmith, AC/DC. It’s lot of the stuff I grew up playing.

Sleaze Roxx: I’ve got to ask — Dangerous Toys’ new album… Where are you guys at with the new studio album that fans like me have been waiting a long time for [laughs]?

Paul Lidel: I’m really excited about the new Dangerous Toys songs! I think they have the vibe of the first Dangerous Toys album, along with sort of a Van Halen meets Aerosmith, meets ZZ Top kind of thing too. Recording has begun but is going very slowly because of logistics. Everyone lives far apart. We have been playing some of the new stuff at the shows. We’re playing in Atlantic City, New Jersey this weekend at the Orange Loop Festival, and I think we’ll play some new stuff there.