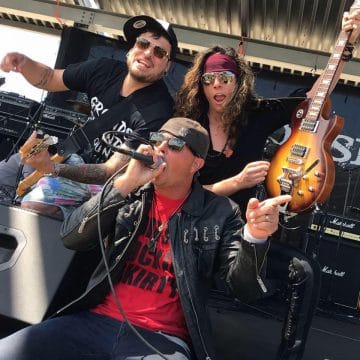 THE BAND DIRTY SKIRTY WILL LIKELY BE FAMILIAR FOR MANY LONG-TIME SLEAZE ROXX READERS GIVEN THAT THE GROUP’S DEBUT ALBUM ‘LONG LIVE ROCK N’ ROLL‘ FINISHED AT #6 ON THE SLEAZE ROXX’S TOP TEN ALBUMS OF 2010 AND ITS SOPHOMORE ALBUM ‘REBEL‘ LANDED AT #19 ON THE SLEAZE ROXX’S TOP TEN ALBUMS OF 2014. DIRTY SKIRTY ARE ARGUABLY THE BEST SLEAZE ROCK BAND OUT OF FLORIDA THESE DAYS AND THE BAND IS SCHEDULED TO HEADLINE THE SECOND STAGE OF THE ROCKFEST 80’S FESTIVAL IN MIRAMAR, FLORIDA TOMORROW. SLEAZE ROXX CAUGHT UP WITH DIRTY SKIRTY FRONTMAN LUKE STEPHENS ON THE EVE OF THE BAND’S APPEARANCE AT THE ROCKFEST 80’S FESTIVAL.

Sleaze Roxx: Dirty Skirty are about to play the RockFest 80’s Festival in Miramar, Florida. How did you guys line up this festival?

Luke Stephens: We were fortunate enough to let it have the music do the talking and the word got out. Roy Anthony runs the Rockfest concerts and although we aren’t as big of potatoes as a lot of the bands playing, we are happy we brought something to the table. 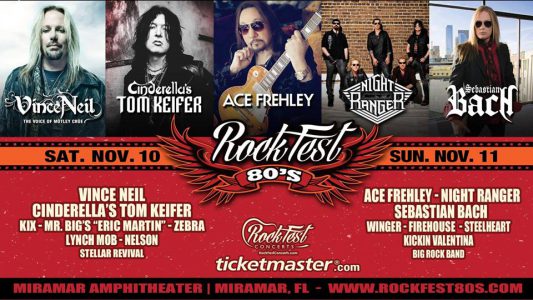 Sleaze Roxx: Who is in the Dirty Skirty line-up for RockFest tomorrow?

Luke Stephens: Cezar Pentzke on bass, Carson Wayne on guitar, Christian McClure on guitar, Timmy Vaughn on drums and myself on vocals. This is the band now and I’m excited to see what we do with the material that is coming together.

Sleaze Roxx: How does it feel playing in a ’80s style rock festival when Dirty Skirty started about two decades after the ’80s were over? 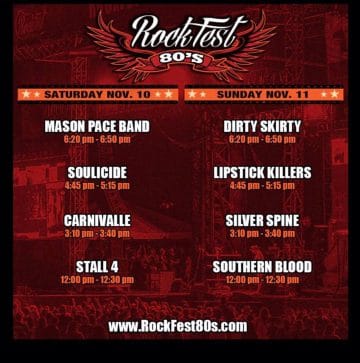 Luke Stephens: It feels great! This is where I wanna be and the timeline is that of the best of rock n roll. I wanna keep the train going for another 30 years when ’80s bands are retired.

Sleaze Roxx: Will you guys have the chance to catch any of the other bands play tomorrow and if so, which ones are you looking forward to seeing the most and why?

Luke Stephens: I am stoked to see Ace! I haven’t seen him since I saw KISS on their farewell tour in 2000. My daughter Scarlett loves “New York Groove” and I can appreciate the journey Ace has been on. He has had three new albums the past few years and I think that’s badass. Of course [Sebastian] Bach, FireHouse, and SteelHeart as well.

Sleaze Roxx: What songs will people be hearing during Dirty Skirty’s set and how long is the band scheduled to play?

Sleaze Roxx: Dirty Skirty played 80’s In the Park Festival earlier this year. How did you line up that festival and how did it go?

Luke Stephens: We loved it. We are glad the tradition continues there. Those guys have gotten a lot of shit running that festival, but this year it was flawless.

Sleaze Roxx: Do you feel any pressure in following up the albums ‘Long Live Rock N’ Roll’ and ‘Rebel’, and why? 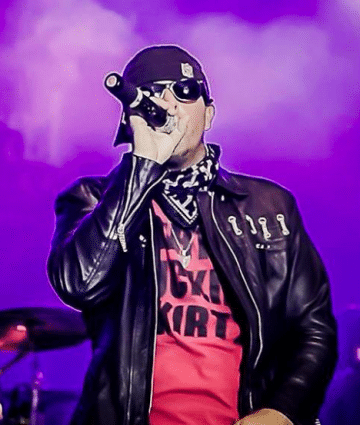 Luke Stephens: I wanna let it flow as it comes. I just had my second kid and all of a sudden the inspiration is pouring out again. My daughter Scarlett used to stare at me during the creating stages and now I’m getting the same with my son Tommy Wayne.

Sleaze Roxx: Which album do you like better? ‘Long Live Rock N’ Roll’ or ‘Rebel’, and why?

Luke Stephens: ‘Long Live Rock N’ Roll’ ’cause it is more raw and it was a gang of guys just ripping. I’m very proud of ‘Rebel’ as well. However, I put ‘Long Live’ up against any rock album the past 25 years!

Sleaze Roxx: It doesn’t seem that Dirty Skirty have ever released an official video for any song? How come?

Luke Stephens: [Laughs] Yep. We did one for “Ride” with hot ladies and a car wash and the videographer pretty much kept it for whatever reason. We need to get on that!

Luke Stephens: It’s shit. Festivals are good. The bar scene is bad and getting worse.

Sleaze Roxx: What are your thoughts on cover bands versus bands like Dirty Skirty that play original music?

Luke Stephens: I am not into that. For me, work is work and if your work is playing covers, you take away from creation. My father is a painter, my mother molded dolls and is an amazing sketch artist. Cover bands take food outta the mouths of original acts.

Sleaze Roxx: Last question for you — what are your top three albums of all-time and why?

Luke Stephens: First is AC/DC’s ‘Back In Black’ ’cause it changed my life. Second is Van Halen’s debut album, which created that ’80s sound and flare. Third is Black Sabbath’s debut, which changed rock into something harder.