NASHVILLE, TENNESSEE IS MOST FAMOUS AROUND THE WORLD AS THE MECCA OF COUNTRY MUSIC, BUT OVER THE PAST SIX YEARS, THE CITY HAS BECOME THE HOME FOR A NUMBER OF GLAM ROCK ACTS, INCLUDING LIPSTICK GENERATION, THE TIP, DENMAN AND KAATO. GYASI IS ONE OF THE NEWER GLITTERS ROCKERS ON THE SCENE. HE’S A FRONTMAN ON PAR WITH THE LIKES OF DAVID BOWIE AND FREDDIE MERCURY WITH THE ABILITY TO PLAY GUITAR LIKE MICK RONSON. SLEAZE ROXX GOT TO SPEAK WITH THE ENGAGING GLITTER ROCKER ABOUT HIS MUSICAL BACKGROUND, HIS DEBUT ALBUM ‘ANDROGYNE’, AND PLANS FOR THE FUTURE. 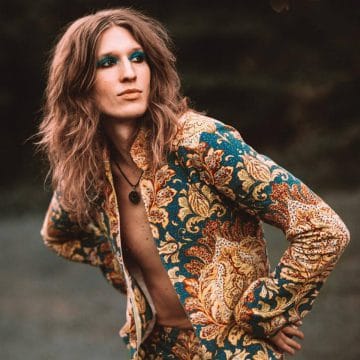 Sleaze Roxx: First off, let me thank you for taking the time to do this interview.

Gyasi Heus: Of course! Thank you for having me.

Sleaze Roxx: Tell us a bit about your musical background. When did you start playing music and what inspired you to play?

Gyasi Heus: I started at a very young age. As soon as I was walking, I was dancing to music. It just grabbed me immediately. My parents had a wonderful record collection so I was very lucky to be exposed to a lot of diverse music early on. I remember first playing a pots and pans drum set with chop sticks along with The Beatles at age four, and then my parents got me a guitar at a flea market when I was six and that was it. I was hooked. I was way into The Rolling Stones at that time and would play along with a live cassette tape of ‘Get Yer Ya Ya’s Out’ all the time. The sound of the audience in that live recording and the energy of the performance was so exciting. Then I got a drum set at age eight and spent two years focusing more on that before deciding at [age] 10, I wanted to really focus on guitar and take lessons. That’s when I started learning all the riffs to Bowie and T. Rex and Hendrix tunes. Then at 13, I discovered Led Zeppelin and that really opened my mind to what you could do in rock and roll so I spent some time working out a lot of that music. I didn’t really start writing my own music till I was 15 or 16 and it took me a while to find my footing as a writer.

Sleaze Roxx: What kind of approach do you take to songwriting? Do you tend to compose lyric-first, music-first or some hybrid of the two? What’s your general process for composing?

Gyasi Heus: I feel like the best tunes are usually a hybrid when the music and lyrics / melody are coming out at the same time. Those are also the easiest to write, but that’s not always how it is. I come up with a lot of guitar riffs, so often, I’ll write based off of a riff. I suppose in general it’s usually music first. I do keep a notebook on me at all times and I write a lot, so often things I write with no music in mind end up in songs, but that’s rarer than music first. There are no rules when it comes to writing for me. When I first started working on this record, I wrote a lot of stuff on the fly. A lot of times, I would grab an instrument I was less familiar with and just start playing the first thing that came to me and have the drummer play along, and sometimes those jams ended up becoming full on songs. There’s certainly an element of mystery in writing. I never really know what’s going to come out.

Sleaze Roxx: Glam is a genre with a wide array of variety in presentation and sound. The kind of glam rock you’re doing is very much in the 70’s vein of artists like David Bowie and Jobriath. What about this take on glam is so appealing to you? What led you into doing this kind of music in particular?

Gyasi Heus: I was always a very flamboyant kid and I was always interested in acting. I would do all sorts of different accents and characters and I was always performing for whoever was around. Also, our next door neighbors were a family from St. Petersburg, Russia, who really turned me on to Bowie and Lou Reed and showed me the layers of artistry happening in what they were doing. As my songwriting developed, I wanted to create my own world by combining elements of theatre with the music. I wanted to create a show that’s transportive. I started immersing myself in fashion and looking at fabrics as well as makeup. I designed some clothes and found a seamstress to make them and I was able to become this character, which is really just an extension of myself. 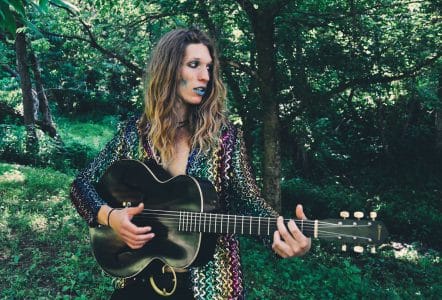 Sleaze Roxx: There are a number of other glam acts on the Nashville scene, but you seem to embrace the androgynous nature of the genre the most out of all the acts in the area and comment on the nature of your appearance in the lyrics. Tell us a bit about your perspective on this.

Gyasi Heus: I guess it mostly comes from growing up in rural West Virginia where gender and really most things are a hard line. Very black and white. If you’re a guy, you do this, act like this, have this haircut, and for girls, it’s the same regimented limitations. I found that extremely difficult growing up because I didn’t fit any of categories that people wanted to put me in. And if you fell outside of that, you were a freak, an outsider. I grew my hair out in 10th grade and even that was like a bold statement, which seems ridiculous now, and as soon as I had longer hair, people would always mistake me for a girl because I had quite feminine features. I think now, I embrace that fluidity and extend it even more to celebrate what used to feel like a stigma for me and to show others that the idea of rigid gender norms is stupid.

Sleaze Roxx: Given the modern social climate, do you find people embracing your image or do you find people fighting against it? In terms of Lipstick Generation, we found some people believing us to be mocking gay culture with our glam image and several media outlets finding us to be taking our image too far. Societal views towards homosexuality and transgender citizens has become much more positive, so what do you feel your image says about the state of modern affairs? Does your sound and image represent something different than it would have in 1974? 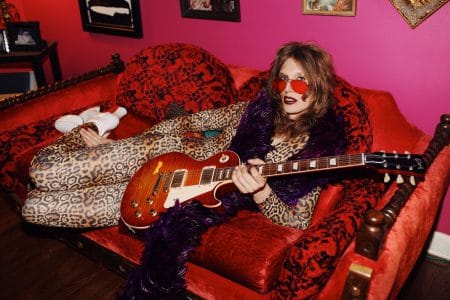 Gyasi Heus: I think that while it’s certainly a different time than 1974 socially, there is still a rebellion in just how I look. It’s still punk to say this is who I am and I’m not afraid to wear makeup or feminine clothes. I think we’ve made a lot of progress but there is still work to be done, and I think we still live in a time when a lot of people would like to see a homogenized world, much like it was when I grew up, where if you were different, you suffered. That still very much exists and I think it’s equally important that we continue to fight against that for future generations.

Sleaze Roxx: A lot of people tend to question the sexuality of artists in the glam genre. You’ve addressed some of this in your lyrics. Do you find the sexual orientation of an artist important and why do you think so many people are obsessed with whether or not a glam artist is gay or straight? Does it ultimately matter?

Gyasi Heus: I don’t think it matters. I think getting someone to question anything is good. Breaking outside of conventional thinking is what this music is all about. It’s the art that is important and the statement, and someone’s personal sexual orientation doesn’t really affect that to me. I think when Bowie said he was gay, it was really shocking and it was a defiant act more than a confession of his identity because he wasn’t really gay, he was curious and interested in everything. He was trying on the forbidden clothes. But to me, it is artistically irrelevant. I write about how I feel and about a lot of characters who might be exploring their sexuality but what my personal sexuality is doesn’t really affect my art so much.

Gyasi‘s “All Messed Up” video:

GYASI- ALL MESSED UP

Gyasi Heus: I released an EP last year that was originally intended to be this album, so this really just feels like getting out the rest of the material from that period. I really just wanted to get it out because I’ve written so much new stuff that I’m working on. The process was still certainly different. I built the track list as a record from the older recordings and put three newer songs on it to make it flow the way I wanted. 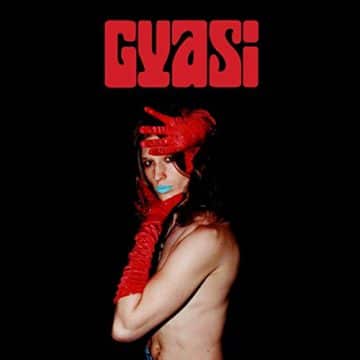 Sleaze Roxx: What are some of your favorite songs off of the new record and what about them makes them stand out?

Gyasi Heus: Mmm… “Androgyne” is one of my favorites. I just like the development of the lyrics and the feel of that recording. “Little Tramp” is also a fun and strange little tune. I imagined a painting and then wrote the song based on the painting so that was a very different songwriting approach I had never done.

Sleaze Roxx: Last question. What advice do you have for the kids out there just getting started in bands?

Gyasi Heus: Write, write, write even if it’s shit. Keep writing. That’s how it gets good. Be persistent. Don’t wait for inspiration. Also, get together in a room with loud amps and drums and jam for hours. Of course, find a way to deal with parents and neighbors, but just explore music with other people.

Sleaze Roxx: Thank you again for your time.

Gyasi Heus: Thank you so much for the great questions!

Gyasi‘s “You Don’t Love Me Like You Used To, Baby” video (with guest Amy McIntire):

GYASI- You Don’t Love Me Like You Used To, Baby (live in the woods)

Gyasi with guest Amy McIntire performs “You Don’t Love Me Like You Used To, Baby” in the woods in a holler somewhere in West Virginia. Video by John Farrell….

Gyasi performing Nightcrawl off the debut full length record “Androgyne.” Buy and stream it here:https://GYASI.lnk.to/26qWqIDDirected by: GyasiProduced by Ho…