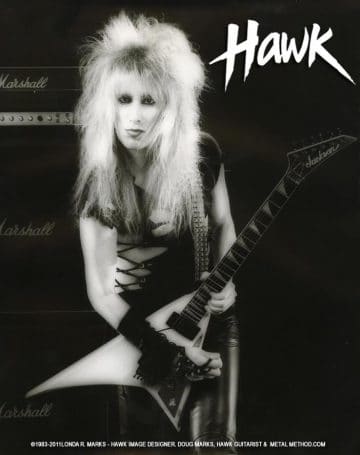 HANDLING GUITAR AND BASS DUTIES THROUGHOUT THE RECORD. SLEAZE ROXX CAUGHT UP WITH MARKS TO TALK ABOUT HAWK, THE SELF-TITLED ALBUM, THEIR CULT FOLLOWING AND OF COURSE, MARKS’ METAL METHOD, AMONGST OTHER THINGS.

Sleaze Roxx: You’re the founding member of Hawk. Prior to cutting the self-titled album you had Lonnie Vencent on board. How many incarnations of Hawk were there prior to the line-up that we hear on the album? I know you cut the bass tracks on that as well as guitar.

Doug Marks: There was really only a single line-up of the band Hawk. That was me, Lonnie Vencent — Lonnie Miller at the time, Charles Morrill, and Glen Burtis. Glen was replaced by Scott Travis [Racer X, Judas Priest]. The Hawk recording was really a solo project featuring David Fefolt on vocals and Matt Sorum on drums. I attempted to put together a group with David to support the album, but it didn’t get off the ground. There were rehearsals but we didn’t play live, so I wouldn’t really call it a band.

Sleaze Roxx: How did you find David Fefolt? How many singers did you audition or work out before you knew he was the guy?

Doug Marks: I had a mailing list of 40,000 people from my Metal Method guitar lessons. I put out an APB for a vocalist and David popped up. This was pre e-mail days. The mailing was through the US mail. I’m sure it was in conjunction with me selling something because those mailings were quite expensive. I received several demo tapes and I felt that David’s voice fit what I was looking for. There were no live auditions. 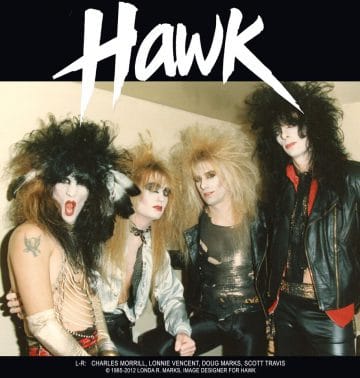 Sleaze Roxx: Hawk was definitely a metal band. The image was that of the times — glam-my. Was that in an effort to make the band more accessible to the mainstream rock fans? David Fefolt had a vocal that was influenced by Ronnie James Dio.

Doug Marks: My ex-wife Londa was my partner in the project. She’s an incredible artist. The band’s image was totally her creation. If left to my own devices, we wouldn’t have had a glam image. I thought Londa did a great job creating the band’s image, but I can’t take any credit or blame for it. It’s true, David has a Dio like quality to his vocal, I also was influenced by Dio. I probably chose David because he sounded similar to Ronnie, but something that I’ve noticed recently is, I don’t hear that similarity anymore.

Sleaze Roxx: You recently reissued the Hawk album on CD. Having been familiar with the record the first time around, it’s fantastic to have it on CD. It brought back a lot of excellent memories. I’m sure you’ve had requests to reissue ‘Hawk’ over the years. What makes now the right time to put this back out there?

Doug Marks: We’ve been doing some Facebook promotions recently to reach early Metal Method students. The ads feature photos from our ’80s magazine ads. Metal Method was huge at the time. Not just because the lessons were effective, our advertising was effective. I spent about $2,000 a month on advertising which attracted a huge following. Every time one of the Facebook promos ran, we received a huge outpouring of comments from Metal Method students. Next, I noticed many of my legacy lessons began to sell. We still sell all of the early course versions from ’83 on. We also began to sell a lot of Hawk CDs. They 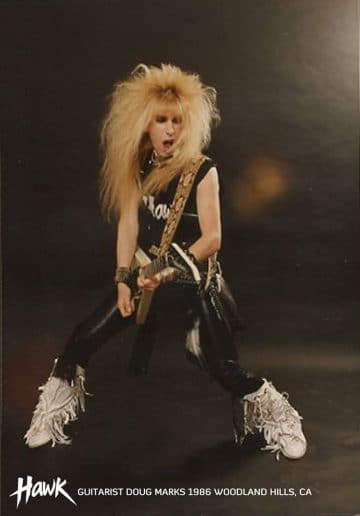 weren’t professionally packaged or pressed. Since there was so much interest, I decided to make the album available on Spotify, Apple Music, and nicely packaged CDs. The response has been incredible. I’m having a lot of fun with this ‘resurgence.’

Sleaze Roxx: I first saw an ad for Hawk on Hit Parader or Circus, but I was familiar with you, only because I would see the ads that you would take out in all the ‘rock’ magazines for your [guitar] instructional tapes ‘Metal Method.’ I picked up the ‘Hawk’ album that you just reissued and while the production sounds from that era in time, the songs are strong and as a whole that record holds up.

Doug Marks: Thank you. I don’t listen to that album often. In fact, I hadn’t listened to that album in many years. I was able to listen to the album with some distance. In the past, I was too close to it, in terms of criticism and so forth. I had never listened to the album like I did recently. I sat there and thought, “Wow! That really was a great album.” I did that album without the support of a label. I had Duane Baron [Ozzy Osbourne, Mötley Crüe] do some of the engineering, I did that at Pasha Studios with another engineer Alex Woltman. It was low budget. I went in with an 8-track. I had recorded a lot of the stuff at home including Fefolt’s vocals. We began by transferring those 8-tracks to the 24 track. Fefolt’s vocals were from the 8-track recordings. The songs were good. I wrote the songs and the lyrics as well. I wonder today where I came up with some of the lyrical content. I have definitely developed an appreciation for that album that I hadn’t had before.

A song from my Hawk album that was recorded in 1986. Features drummer Matt Sorum (Guns N Roses) David Fefolt on vocals, Doug Marks (me) on lead guitar and b…

Sleaze Roxx: In reading through the liners, I saw that you were the sole contributor for this record. Are there any songs that didn’t make the album that are in the archives? 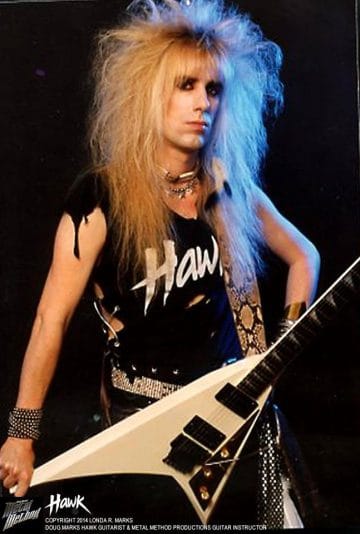 Doug Marks: There is one song that didn’t make the album and I can’t even remember why [laughs]! There was some stuff that I worked on after the Hawk album. I was working with the original singer Charles Morrill. It didn’t develop into a band, but we considered putting something together. We wrote quite a few things, but it fizzled. I have written some stuff over the years but it’s been very sporadically. I don’t think it would be too difficult to put an album together of existing songs.

Sleaze Roxx: How much interest do you have in making another album? In this day and age, you can make a great sounding record in a home studio with a limited budget.

Doug Marks: Oh, absolutely! I think about that all the time! It’s been 33 years since the release of the Hawk album. I haven’t given up on the idea of doing a follow up. It takes time to do something that’s done like that on a high level. As you know, I still continue to do Metal Method, which is my income and it takes a lot of time to do what I do with Metal Method.

I found the time and money to do the Hawk album. Because Metal Method was so successful, I was making a lot of money, therefore I had a lot of money to spend. I took six months off from Metal Method and handed the business to somebody else, to handle shipping orders out and so on and so forth. I had six whole months to dedicate to the music. Now, I haven’t been in a situation like that since. I have been thinking of biting the bullet and moving forward with making a new album, but the truth is I don’t make much money! I tell people and this is actually the truth, my income over the past 20 years is that of what a West Virginia school teacher makes! That’s before they went on strike! I don’t make much money, so I’ve been trying to prioritize what I want to do in the near future, but recording and playing music live is on the list. It’s just a matter of making it work. It must be on a high level. I’m focused on doing something next year, but we’ll see 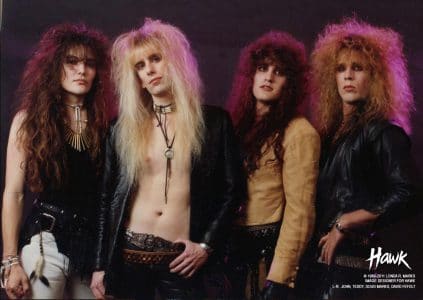 Sleaze Roxx: Who are some guitarists from your era that you really like?

Doug Marks: Oh, well of course Eddie Van Halen. He set the standard. Randy Rhoads was great. Love him though he had more of a ‘classical’ style than I did. Yngwie [Malmsteen] came on strong. I love listening to his early stuff. I was probably influenced more by Yngwie’s songs more than his guitar playing. My main influences growing up were Jimi Hendrix, Robin Trower, that ‘spacy blues’ and ‘psychedelic rock’ type of thing.

Sleaze Roxx: How much live performances did Hawk do?

Doug Marks: The original band, we worked for about six months. It was a full-time thing. We played on weekends, all of it in Southern California. We worked our butts off rehearsing. Later on, when I recorded the album, the idea was to promote the album with live performances. That didn’t materialize. When I took that six months to dedicate to Hawk, I had $80,000. When I 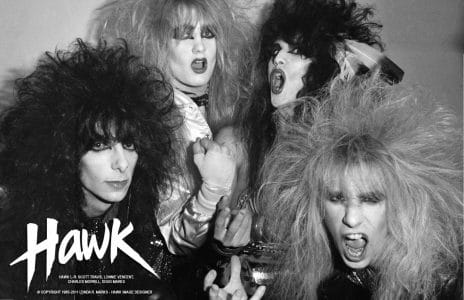 recorded the album, I was making less money because, in the time I had taken off to work on Hawk, other people stepped in to fill the void that I had left. Competition! I didn’t have that kind of money and we were going into S.I.R. Studios to rehearse. It was expensive and that wasn’t good use of financial resources.

Sleaze Roxx: How did the early ’90s affect Metal Method? There was a period of time where guitar solos and guitar heroes were frowned upon.

Doug Marks: Of course, it had an impact, but it’s hard to say to what extent. I have never had a hard time selling guitar lessons. I think part of that reason was because I had people who followed me in the past. People’s musical tastes are formed in their teens and it doesn’t change much after that. I’ll give you an example. In 1982, my music was appealing to 16 year old, so now 36 years later, they’re 52 and what has happened is that my audience has continued to grow with me. So with the people who were interested in Metal Method in the ’80s, they’re still interested in what I’m teaching. Of course, it’s on a different level. 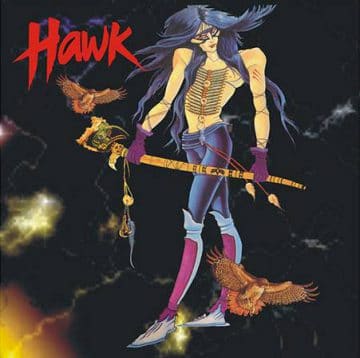 Sleaze Roxx: What stuff do you listen to at the present time?

Doug Marks: Taste evolves. I came from the era of The Beatles, [Led] Zeppelin, [Jimi] Hendrix, stuff like that. During the Hawk era, I was playing with guys that were 10 to 15 years younger than me. The stuff I was playing with that band definitely wasn’t the music of my youth. So of the music from that era is not even the music of my taste. I think if you’re a musician, your taste definitely evolves. I can’t say that I have outgrown ’80s music or any of the stuff that I grew up on, but I can say that I don’t listen to any of that stuff at all. I listen to Sirius XM Octane. That’s what I listen to these days and that’s what’s on my Spotify playlist. I have bands like Switchfoot, Asking Alexandria — stuff like that. One of my favorite bands right now is Nothing But Thieves. I don’t think I even heard them on Octane, but I stumbled upon them.

Sleaze Roxx: So wait a minute. If you revamped Hawk, would it be safe to assume that Hawk in 2020 would sound like something you would hear on Octane?

Doug Marks: Oh, definitely! I don’t want to be what I was 33 years ago. I’ve already done that. I want to move forward.