SLEAZE ROXX READERS MAY REMEMBER HUNTER RAYMOND AS THE DRUMMER OF THE CANADIAN HEAVY METAL BAND MIDNIGHT MALICE WHOSE DEBUT FULL-LENGTH ALBUM ‘PROVING GROUNDS’ LANDED THE #10 SPOT ON SLEAZE ROXX’S TOP TEN ALBUMS OF 2014. MIDNIGHT MALICE BROKE UP AT THE START OF THIS YEAR BUT RAYMOND HAS FORGED AHEAD WITH MIDNIGHT MALICE BANDMATE AND BASSIST TOMMY GERVAIS TO FORM A NEW BAND CALLED HIGHLIFE ALONG WITH GUITARIST MICHAEL STARNINO AND SINGER LIAM MACKENZIE. HIGHLIFE HAVE JUST RELEASED THEIR SELF-TITLED DEBUT FOUR-SONG EP AND SLEAZE ROXX CAUGHT UP WITH RAYMOND TO FIND OUT MORE ABOUT HIS NEW BAND.

Sleaze Roxx: Congratulations on your new band HighLife. How did the band get started?

Hunter Raymond: Originally, it just started with me and the guitarist [Michael] Starnino just jamming and having fun. And then we were like, “We need a bass player” so why not get Tommy Gervais from Midnight Malice to come play with us? And then we started playing like that for a few months. We started getting really good with our new songs. We were like, “Man, we need a singer so we can play some shows.” Got drunk one night and called up ol’ Liam [MacKenzie] from Vancouver — I mean Pender Island — BC [British Columbia] to come and sing for us [laughs].

Sleaze Roxx: But you said Liam is in British Columbia?

Hunter Raymond: Yeah. He lives on Pender Island in BC.

Sleaze Roxx: So how does that work out with you guys being in Toronto [Editor’s note: Toronto to Pender Island is over 2,700 miles in distance]?

Hunter Raymond: We would use a portable recorder. We would record our jams and work on our new songs. Once we had one that we were really happy about that we thought was structurally finished, we’d send it to Liam and he would record some vocals over it and send it back to see if we liked it [laughs].

Sleaze Roxx: Alright. But I also understand that you guys have some shows coming up including your album release party on December 2nd [at the Bovine Sex Club in Toronto, Ontario, Canada]. So does that mean that Liam is flying up from BC to do the shows?

Sleaze Roxx: Cool! So I am curious going forward, how does the band work if Liam is still in BC?

Hunter Raymond: The same way we write and record, and send him stuff. He’ll send us back his opinions and we’ll keep working [laughs]. 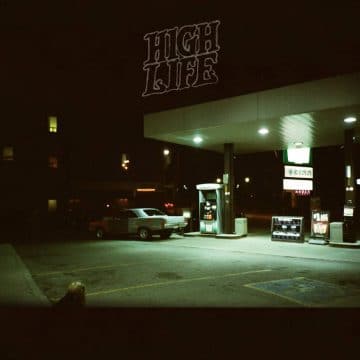 Sleaze Roxx: [Laughs] Cool, cool. Now obviously, HighLife are very different musically from Midnight Malice. How come there is a switch in sound, at least for you and Tommy?

Hunter Raymond: It just kind of happened this way. Starnino, the guitarist, he’s not like a heavy metal riffer. He’s more like a blues psychedelic rock kind of guy. I really love that music and so does Tommy, and so does Liam. We just started playing really funky music and then all of a sudden, it turned into this mix of funk and Malice I guess [laughs].

Sleaze Roxx: So how many songs on the new EP?

Hunter Raymond: There’s four songs on our EP and we have about ten or twelve originals written already for shows.

Sleaze Roxx: How did you go about picking the songs that made it onto the EP?

Sleaze Roxx: What about the name HighLife? How did you come up with that?

Hunter Raymond: We were actually just hanging out and Starnino had this shirt on — like a “Rusty Wallace” shirt [laughs]. And then we started making jokes about Rusty Wallace living his high life. “Yeah, Rusty Wallace.” And then it turned into, “We should name the band HighLife.” It was all very sporadic. We got really really drunk when it happened. I can’t explain the whole story because it just was a lot of jokes that led to it and then it was. “This is really awesome.” 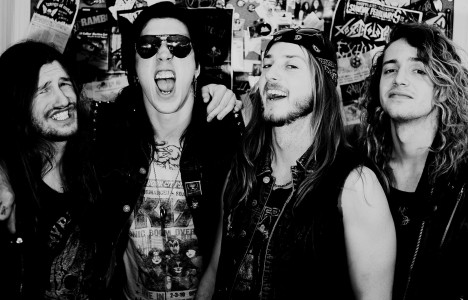 Sleaze Roxx: So let’s talk a little bit about Midnight Malice. I interviewed Caleb at the beginning of the year. I don’t know if you ever saw the interview or not?

Sleaze Roxx: [Laughs] Fair enough. So Caleb essentially said that the creative juices sort of dried up and he got frustrated with all the band member changes. What’s your take on the end of Midnight Malice?

Hunter Raymond: We were all like mentally drained. That was a very destructive band. It just killed itself really I’d say.

Sleaze Roxx: When you say that it was a destructive band, what do you mean by that?

Hunter Raymond: Like way too much partying, way too much like… I don’t know. It just seemed very destructive. The energy wasn’t good. It was a lot of aggressive energy. It’s really hard to work in that kind of environment obviously forever. It just got too much. And yeah, it got bland. We couldn’t work anymore. It seemed very dead stopped so it’s probably best just to move on.

Sleaze Roxx: So when I interviewed Caleb back in February [2016], he indicated that he was playing organ in a project with you guys. Is HighLife the project that he was talking about?

Hunter Raymond: It is but he decided not to be part of it, which is fine. We’re still good friends and everything so it doesn’t matter at all [laughs]. 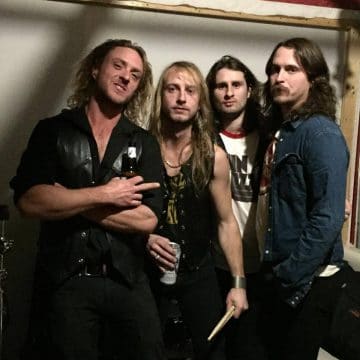 Sleaze Roxx: [Laughs] Fair enough, fair enough. What are your best memories from your time in Midnight Malice?

Hunter Raymond: Japan for sure and then, all the parties ’cause there were a lot and a lot of fun times with that band. Running around causing chaos around the world [laughs].

Sleaze Roxx: [Laughs] That’s cool. What are you planning for HighLife in the future?

Hunter Raymond: Right now, we are working on releasing this album and pushing it as hard as we can and try to get it on a label. When Liam goes back, we’ll try to record a full length and then have that ready to hopefully push out for the summer so we can have another release. Smash the world with some more awesome music!

Sleaze Roxx: I am a little surprised by how fast you guys are proceeding recording wise because with Midnight Malice, it just seemed that things would take forever.

Hunter Raymond: I learned a lot from that band [laughs].

Hunter Raymond: I learned what not to do a lot more than what to do. I feel that recording is very crucial and you always have to have new material coming out so you can keep your ball rolling. If you don’t have music, you just end up stale. The faster you record the music that you have written, then you don’t have to worry about that. That’s already recorded, right? You keep writing it if you’ve already recorded your old stuff. It’s more like progression I feel.

Sleaze Roxx: What do you prefer playing? The stuff in Midnight Malice or HighLife?

Hunter Raymond: HighLife is easier on me for sure. I feel it’s like more my style of drumming. But I really really loved playing in Malice. It was a lot of fun. I love that kind of music too. That’s a hard question.

Sleaze Roxx: [Laughs] That’s what I am here for. 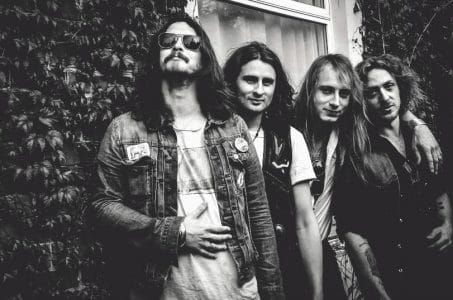 Sleaze Roxx: Are you still affiliated with Craig Rose [at one time, he was Midnight Malice’s de facto manager] at all?

Hunter Raymond: He’s not managing our band but he is our good friend and we do ask him for advice from time to time.

Sleaze Roxx: Do you have anything that you’d like to say to all the HighLife fans and I guess the Midnight Malice fans that are probably happy to see you back on the scene?

Hunter Raymond: We love you and we hope that you enjoy our new music. Can’t wait to see you at a show near you. I hope that you continue to support us and love you to death [laughs].

Sleaze Roxx: Where can people get the HighLife album?

Hunter Raymond: They can order it from our Bandcamp page and Big Cartel.

Sleaze Roxx: I noticed that the proceeds from the digital sales for HighLife’s new EP are going to the charity Standing Rock Sioux Tribe – Dakota Access Pipeline fund. What made you guys decide to do that and why that charity in the first place?

Hunter Raymond: We believe in the rights and freedoms of the people, and it seems that they are being stripped away from them there. It’s a terrible scene and we really don’t agree with it and we’d like to help the people there so that’s why we are doing it.

Sleaze Roxx: Sometimes I guess heavy metal gets a bad reputation that there is no care for things like that so it’s nice and refreshing to see a new band like yours doing that. Is that something that you will be doing in the future?

Hunter Raymond: I feel like we should. Yes. You need to help people and if music is the only way we can do it, then you got to do it. I believe in that personally.