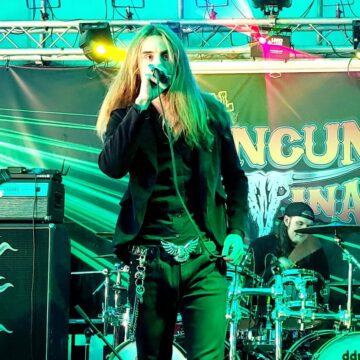 Sleaze Roxx: Thanks for taking the time to do this, Ashton. Native Sons have certainly kicked off 2022 on a high note, sharing the stage with Resist & Bite in Atlanta, Georgia. How did that show go over for the band?

Ashton Blake: I feel like the show was a success and we were honored to share the stage with such great musicians. The crowd was responsive to all the bands. You can really feel the spirit of rock n’ roll in Atlanta. Resist & Bite, Seven Year Witch, BSOL and Velvet Willow were all amazing.

Sleaze Roxx: You’ve had the good fortune of landing a number of high-profile shows from the ‘Monsters On The Mountain‘ festival to bills with Kickin Valentina and, more recently, Resist & Bite. Aside from talent and positive word-of-mouth, what do you attribute that to?

Ashton Blake: Friendships we have made over the past year have contributed a lot to our success. We have a great fan base who have become like family to us. We owe everything to the “fanmily” we have.

Sleaze Roxx: Is it intimidating [as a newer band] to share stages with more established acts or do you just get out there and throw a stake in the ground and do your thing?

Ashton Blake: Native Sons set out to plant a flag for sure. I figure if we weren’t meant to be there, then we wouldn’t. We put a lot of time and effort into all our shows. We hope that continues to show through in what we do.

Sleaze Roxx: I first saw the band live back in May of 2021, opening for Kickin Valentina in Hanover, Maryland. I thought that you guys were fantastic and immediately stood apart from the pack. I understand that the band were actually in a collision on the way to that show and it almost didn’t happen? 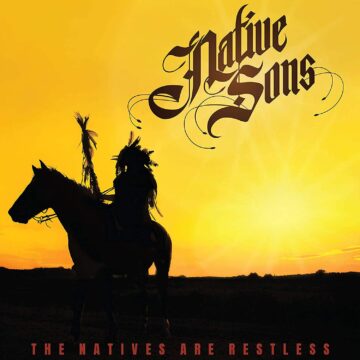 Ashton Blake: Yes, our former drummer Brett Siples hit a deer outside of Frostburg, Maryland. It was scary. We could have all died but we were fine. Bill and Lori Chavis picked us up and took us to that gig. They spent four hours in the car to make it happen. Bill went above and beyond, and we hope to hold that trait as well as many other things he taught us along the way.

Sleaze Roxx: Bill Chavis [R.I.P.] was such a champion for the band and rock n’ roll in general. I remember him being at that same show and telling him how cool I thought the band were. How did the Native Sons initially link up with HighVolMusic and what are some of your fondest memories of working with Bill that you might like to share?

Ashton Blake: I grew up in rock n’ roll with Bill Chavis as a mentor for years. We first met for his band Saints of Rebellion when I was 19 years old then again in “Modern Superstar” and “New Machine.” I’m 28 years old now, so nine years of having him on my team was a blessing. I miss him and Lori Chavis very much. I remember the fondest moment I had was at his family’s Christmas party. It was his brother Craig’s first Christmas party in his new house. It’s a private family event I’ll never forget. Nothing was expected of us but to just enjoy the company of friends.

Sleaze Roxx: Native Sons have a sound that is compatible with a lot of legacy acts but also modern enough that I could envision hearing the songs from your album on active rock radio. Was that something that you set out to do when you wrote the music or did things just work out that way?

Ashton Blake: ‘The Natives Are Restless‘ came about rather interestingly. The former members had music to eight songs but no lyrics or melody. I fly into Florida and write all the songs having only two weeks really to finish the material. I think it was a collaboration of things that made the album sound the way it did. I had written “Monster” years prior and “One Another” was something I took time aside to write because we needed a 10th song.

Sleaze Roxx: Who are some of your influences as a vocalist?

Sleaze Roxx: Your debut album ‘The Natives Are Restless’ was written and recorded a year or two prior to the full-fledged touring that you did in 2021. Aside from the pandemic obviously bringing everything to a grinding halt, what was happening with the band in that span of time between the recording of the album and the re-emergence of the band?

Ashton Blake: The band was doing what most bands did in the pandemic — waiting it out. Each of us had our own projects at home and kept busy. Unfortunately, the members on the album couldn’t come back after the pandemic had let up a bit. Things aren’t still “normal”, and I don’t see them going back that way any time soon unfortunately.

Sleaze Roxx: Aside from yourself, none of the current members of Native Sons played on the first album. Can you talk a little bit about the line-up changes and the evolution of the band? 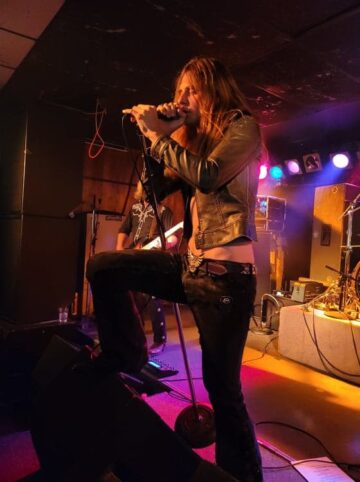 Ashton Blake: The record was recorded under the name “New Machine.” We were to release the album in 2019, but the album was delayed till 2020 and, as you guys know, the pandemic happened. The members all went back to work and being the only member that could carry on, the rest of the band gave their blessing for the release. My only goal at that time was to finish what we started. So, Bill Chavis agreed if I could put a band together to play the album, we would at least see it released. I don’t think we were as prepared for the demand for us to play live. The line-up I got to replace them couldn’t go on the kind of tour the market was demanding, so I put together a whole new line-up.

The line-up changed again before ‘Monsters On The Mountain’ because, let’s face it, the road life isn’t for everyone. You hit rouge deer, stay in ashtray motels, and have to travel for six to 12 hours at a time. ‘Monsters On The Mountain’ treated us very nice, but you don’t always get the kind of rock star treatment you see in the movies. I feel coming into 2022, we have made the most solid line-up we can. Native Sons’ new line-up is full of veteran musicians and hungry young cats who have toured and know what it means to be a band. Yes, we have had some turnover in the past, but I wouldn’t look for it to happen again this year.

Sleaze Roxx: It seems like Native Sons have really hit a stride and the current line-up has gelled. Is there a time frame to record and release new music to keep that momentum going?

Ashton Blake: Yes. We are currently in the studio. Already finished three songs and going in for three more on Friday [January 21st]. Our goal is a late March / early April to release a single.

Sleaze Roxx: In comparison to ‘The Natives Are Restless’, how would you describe the new music that you’re working on?

Ashton Blake: I’d say the new music is catchier, heavier, and more mature than our last album. We are super excited to see the reaction from fans and critics.

Sleaze Roxx: Has the band lined up a new label to distribute the new music or do you plan on doing so independently?

Ashton Blake: We have offers on the table, but nothing set in stone as of yet. We have thrown around the idea of an independent release and know what it will take to make that happen. Whatever happens, it will not impede us from making and releasing new music.

Sleaze Roxx: With sales of physical media on the decline [aside from vinyl], is there a need for bands to release physical copies of new music or do you think digital only is the way to go? I ask that only because, while cost effective, streaming reportedly does not yield the same level of return for an artist that selling a CD or record does….. 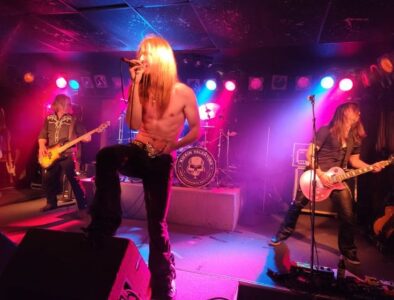 Ashton Blake: There will always be a demand for physical sales though I think bands both big and small will need to come up with fresh ways of packaging and grouping their products.

Sleaze Roxx: You’re moving to a deserted island and can only take five albums with you. What five albums would you take?

Sleaze Roxx: If you could tour with any other [active] artist or band, what would your dream tour package look like?

Sleaze Roxx: Thanks again for taking the time to do this, Ashton. Does the band have a website or social media handle where fans can go to stay up to date with your music and tour schedule?