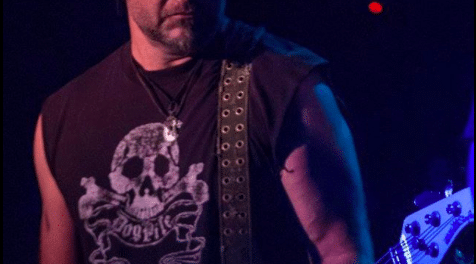 “Being a part of this is like being in a Circus Magazine. It takes me back to my youth, seeing these guys in the pages along with Mötley Crüe and Ratt,” says new Rough Cutt bassist Jeff Buehner. “One of the signatures of this band is the harmonizing guitars. When they harmonize, it’s not part of the solo, but part of the song. It’s like part of the verse in some cases.” To say that Buehner is geeked to be part of Rough Cutt would be an understatement. Buehner has been playing in and around the Portland, Oregon, USA area for years. Buehner grew up in the Columbia River Gorge, a couple miles from where I’m sitting right now. “Man, you could have probably heard me when I was playing my bass from your place when I was a kid! I was using a distortion 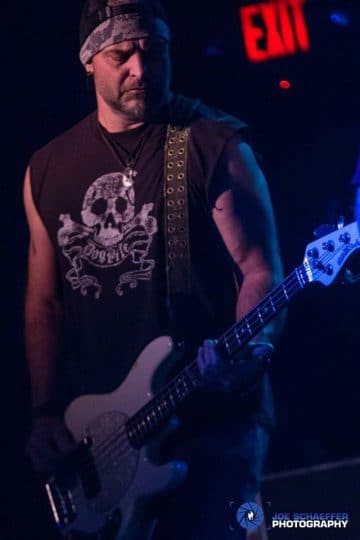 pedal. You could have probably hear my mom screaming at me to turn it down!” Sleaze Roxx caught up with Buehner on December 2nd, the Monday following Rough Cutt’s show in Portland. Here’s a chance to get to know the new Rough Cutt bassist.

Sleaze Roxx: How did you get contacted about being a part of Rough Cutt and were you familiar with their material?

Jeff Buehner: I’m tight with the Black ‘N Blue guys — Brandon [Cook] Bob [Capka] and Patrick [Young]. Black ‘N Blue played at my high school! Well, they weren’t called Black ‘N Blue at the time. They were called Loved By Millions. I moved to town [Portland]. I was a teenage kid and they had come back to Portland, they had a record deal and were working with Gene Simmons. I got to know the guys and they’ve always been within an arm’s reach of me, I love those guys. I was friends with Brandon who then joined the band, which was great.

There’s a woman that works for Grover Jackson named Lisa Paulus. She’s close to the Rough Cutt guys and they had reached out to her because they wanted to put the band back together. Amir [Derakh] and Matt [Thorr] had moved on from Rough Cutt and weren’t’ going to be a part of it. So, Brandon and I were contacted if we were interested, so I quickly started to learn the songs. About a month after that, we got word that Paul Shortino, Dave [Alford] and Chris [Hager] were going to try to do something with Carlos Cavazo and Sean McNabb, they were going to call it Rough Riot. So, I was disappointed, but happy for them because I’m a fan of all of those guys!

About a few months or so after that, I got a call if I was still interested, the ‘Rough Riot’ thing didn’t work out and Dave and Chris moved forward with putting Rough Cutt back together. Of course I replied “Yeah, sure! I’d love to be a part of it [laughs]!” I learned the songs. I went to LA. I jammed with them and we got along fantastically. I got along the best with Dave. Chris too but there’s something magical that happens with a bass player and drummer who have good energy. We communicated so well. The bass guitar and the drums are the heart of the band. When it doesn’t work, it’s like a weird marriage. This worked incredibly well. I can’t say enough about Dave, I really appreciate his approach to drumming and his approach to songwriting. He’s a ‘meat and potatoes’ kind of drummer, which I can relate to because that’s my approach to playing bass. It’s this kind of when in doubt subtract kind of mentality and I can totally relate to that. I was familiar with their music. I had heard their cassette a couple of times. I recall liking what I heard, but for whatever reason the cassette never made it to my truck. When this opportunity came up I was like, “Rough Cutt?!” I haven’t heard that name in a long time! They were kind of in and out, really quick. They had the two records. They missed the wave, because they waited around and wanted to work with Ted Templeman.

Sleaze Roxx: You played Portland this past Friday night and you played a ten song set, five from each record. How many songs did you guys play around with before you nailed down the set?

Jeff Buehner: We had a pretty good idea of what we wanted. We quickly drafted a 45 minute ‘power set.’ I think we moved a couple of songs out of the set. In total, we had in the area of 15-16 songs. I think the set we wound up with was just perfect for the amount of time that we were allotted.

Sleaze Roxx: I agree. I think even the stuff from the ‘Wants You!’ record, which was really polished, sounded grittier live, which was a really pleasant surprise. Don’t get me wrong, I like a lot of the songs on ‘Wants You!’ but the production is just so slick and ‘poppy.’

Jeff Buehner: You’re right, it was ‘poppy’ sounding. You know, if they would have done a 3rd record, it would have been a really interesting sounding record. Can you imagine a blend of the first and second record? The impact that two records have had. You mentioned earlier that Rough Cutt has this ‘cult following.’ The fans have a connection to those records and the musicians who are fans speak highly of the songs and the records. I’m now in the middle of this and have found myself being a bigger fan with even more appreciation for what they’ve done. It’s such an honor to play with these guys. 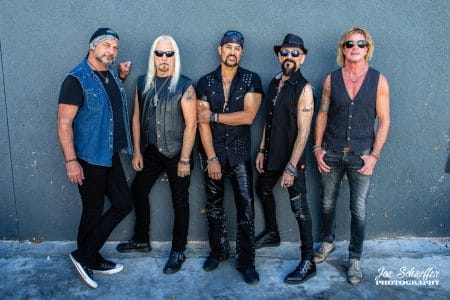 Sleaze Roxx: What’s your favorite Rough Cutt song to perform and what’s been the most challenging one to learn?

Jeff Buehner: I love playing “Black Widow” and “Let ‘Em Talk.” There’s this really cool bass stuff going on in both of those, “Black Widow” has one of the most challenging bass sounds to get because when Matt [Thorr] recorded that, he used a whammy bar on the bass [laughs]!

Jeff Buehner: [laughs] Yeah, it’s challenging because you have to bend the string to the exact same spot, but you have to make it sound like you’re using a whammy bar [laughs]! That one took a lot of patience and I just had to play it over and over and over [laughs]! I like playing “Let ‘Em Talk” because I normally play with my fingers, but on that one I play with a pick.

Sleaze Roxx: How was playing Portland for this relaunch of Rough Cutt? It’s a hometown gig. Was there a little more anxiety than normal?

Jeff Buehner: The way that I approached it… whenever I’m performing something that someone else wrote, I try to be respectful of the writer. In this case Matt Thorr or whoever wrote the bass lines, I learn the song and I try to get all of the nuances of everything that they played. So I practice and practice the song and after a while I make it my own, because it sounds like me playing the song. I’ve been flying back and forth to LA rehearsing with these guys for a couple of months now. We rehearsed and rehearsed and rehearsed. I think because we tightened things up, I wasn’t as nervous as maybe I should have been? [Laughs] I won’t lie, there was a little anxiety, but once we hit the stage, it went away. We were so prepared for this. I can’t wait to get back up stage with these guys and play some more shows. Hopefully now that we’ve gotten our feet wet, we can look at doing some fly ins and stuff like that. I will tell you that based on the show Friday night in Portland, we have been getting a lot of interest, which is very exciting.

Rough Cutt nov 29 song 4 through end of the show