I RECENTLY HAD THE CHANCE TO SIT DOWN AND TALK TO NOVA REX BASSIST KENNY WILKERSON. WHAT CAN I SAY ABOUT THIS INTERVIEW YOU MAY ASK? WELL LET ME TELL YA, MAN, I REALLY LIKE 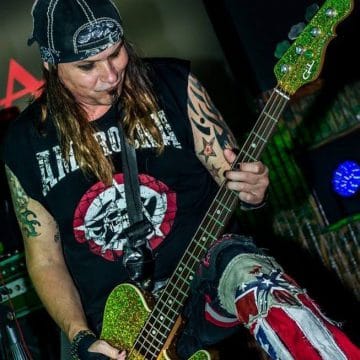 THIS GUY. THIS GUY KNOWS HOW TO PROMOTE AND SELL MUSIC. IT’S FUNNY TO LISTEN TO HIM TALK, AND NOT IN A BAD WAY, HIS PERSONALITY QUICKLY DRAWS YOU IN. YOU ARE CAPTIVATED BY HIS EVERY WORD. IN TERMS OF NOVA REX, WILKERSON EXEMPLIFIES SO MUCH ENTHUSIASM THAT YOU JUST WANT TO GO AND LISTEN TO A NOVA REX ALBUM RIGHT AWAY. I WOULD LAY MONEY ON IT THAT WILKERSON STILL FEELS THE SAME WAY ABOUT THIS BAND AS HE DID WHEN HE WAS 18 YEARS OLD. HIS STORIES ARE VERY COOL AND EXTREMELY CANDID. SOME I CAN SPEAK OF, AND OTHERS I THINK ARE JUST BETTER LAID TO REST IN MY OWN PERSONAL MEMORY BANK. HONESTLY, THIS MAN IS AN INTERVIEWER’S DREAM COME TRUE. SO PLEASE SIT BACK AND ENJOY THE RIDE. LADIES AND GENTLEMEN, I GIVE YOU KENNY WILKERSON.

Sleaze Roxx: Hey Kenny, great to talk. Starting right off the bat, let’s talk about the new album…Rock Star Roadshow. This is an album of all new material? 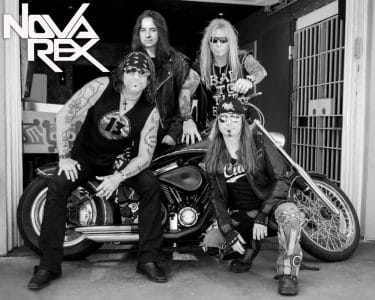 Kenny Wilkerson: No, not exactly. Two songs are from a year ago. “She’s A Bitch” was last year. “Crank it Up” was from a few years back. Everything else is new

Sleaze Roxx: Was this album recorded in Florida?

Kenny Wilkerson: Yes in Florida at The Porch Studio. Mixed in L.A. at Lemon Song Studio.

Sleaze Roxx: The song “She’s A Bitch” has an AC/DC vibe, but I actually think it sounds more Krokus like. Was this something that just came out naturally?

Kenny Wilkerson: We were always AC/DC fans. I wanted to have a song that rounded out my song list live. We play material that is ’80s sounding, then we have stuff that is current sounding. Of course we have the typical ’80s power ballad. So “She’s A Bitch”, we wrote it on purpose. 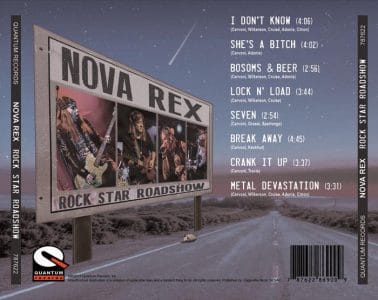 Sleaze Roxx: Love the video. Who is the main girl? The “Bitch” I guess you would call her.

Kenny Wilkerson: May… I knew her. I called up my chick friends. Who wants to be in the video? May put her hand up.

Sleaze Roxx: On “I Don’t Know”, vocalist Adrian Adonist — great name by the way — reminds me of the original singer from Bonfire, Claus Lausmann. Was there any type of approach on the album vocally?

Kenny Wilkerson: I am not familiar with Bonfire, but I will check them out. In terms of Adrian, oddly enough he was a local find. He’s a lot of fun live. He really never had the experience. The story goes, we got booked to play Lee’s berg in 2012. Bud wanted us on the bill for a one hour gig. We had J.P. on guitar and a few other hired guns. It just became too expensive to have these guys. So I found Adrian in a bar.

Kenny Wilkerson: It was kind of a Jackyl type of thing. Four Horsemen yes as well. It’s a novelty song. I wanted to call it “Boobies and Beer”, but obviously that wouldn’t fly. At the time we were working on “A Leah” by Donnie Iris. We recorded it. We weren’t happy with it. We said, “The hell with that.” So we came up with “Bos0ms & Beers” in 15 minutes.

Sleaze Roxx: There is some heaviness to the guitar riffs, but still a groove element to some of the songs. Which really makes for a cool sound. Were you guys just trying to put all your eggs in one basket? What I mean is, just taking different genres and meshing  them into one sound? 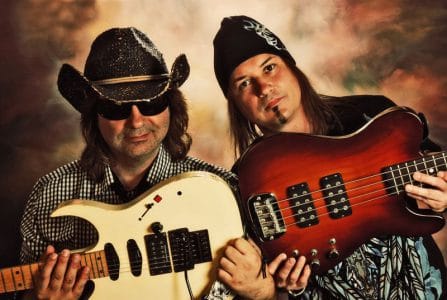 Kenny Wilkerson: That was the first time ever using drop D. It sounds meaner and more current. There are bands that are dropped way further than that. During a sound check of one of the events we did, checking out some of those bands. The strings are dropped off more or less. In “Bosoms & Beer”, it’s heavy, with a hooky chorus.

Sleaze Roxx: “Lock & Load” is a perfect example. The guitar is heavy, but the bass and drums just keep the song tight with a rock feel. A lot of times, the bass and drums would follow the heaviness of the guitar which would give the song a totally different feel. Was this intentional?

Kenny Wilkerson: “Lock and Load” is a low D tune. The intro has a Guns N’ Roses vibe to it. It ‘s deep kinda. Then there is the country piece in the middle.

Sleaze Roxx: You have a few guest musicians on the album?

Kenny Wilkerson: Yes. Do you know Tony Brock? He’s the drummer for The Babys. John Bisaha who is the vocalist of The Babys. Phil Soussan. He played with Ozzy and Billy Idol. He’s a British guy. 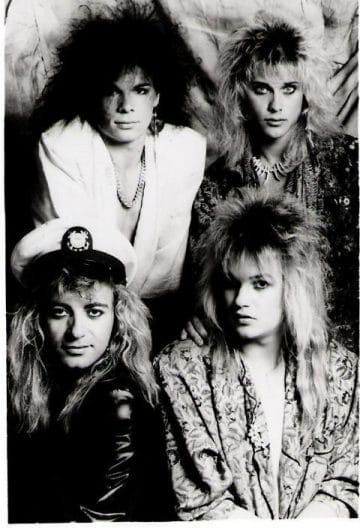 Kenny Wilkerson: You know he was in that project with Jimmy Page in the ’80s.

Kenny Wilkerson: Yes, When Jimmy decided to finally do something, Phil was the bass player, then he got the call to join Ozzy’s band.

Sleaze Roxx: So that’s when Tony Franklin came on board.

Sleaze Roxx: I love the tongue in cheek lyrics and the sexual innuendos of the ’80s. What was it in the ’80s for you guys? The movie kind of touches on this slightly.

Kenny Wilkerson: We tried all the same shit as the likes of Def Leppard. Just on a smaller scale. We’d have twenty chicks in the dressing room, where Def Leppard would have hundreds. So do the math, four guys in the band, five girls each. We’d make up things where you could only hang with us if you were topless. And if it was a girl that wasn’t that desirable, we’d rock paper scissors for it. We did the same shit that you read about in ‘The Dirt’ by the Crüe.

Sleaze Roxx: On your website, it states that former Britny Fox Greg Polcari is playing guitar for the band, but in the latest press photo I received, original guitarist J.P. Cervoni is pictured. Who played guitar on ‘Rock Star Roadshow’ and who is currently playing guitar in the band? 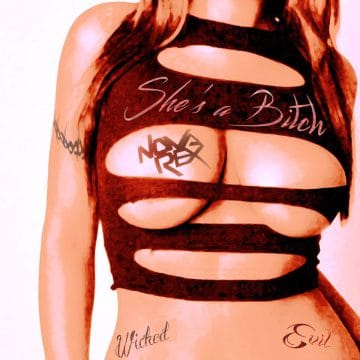 Kenny Wilkerson: The website is trashed. It hasn’t been updated in a while. While JP is on every album, Greg Polcari is touring with us. J.P. does certain shows. He is actually currently in Italy.

Sleaze Roxx: So have you actually ever been to Canada, being that JP has Canadian roots?

Kenny Wilkerson: In ’86, I came up there. JP got sent back at one point, but managed to sneak back in to the States. I spent two months in London, Ontario.

Sleaze Roxx: You are slated to play at The Rockpile in Toronto on Sept 1st. Are there any other Canadian dates?

Kenny Wilkerson: We are doing Fall Jam in Manitoba. Also the Rock Star Bar in London. Helix played there last year. [The] London gig is J.P.’s gig. We love Canada. The colored money. Coffee by the cup. Hockey players. Statue of a cow in London. When I was there in ’86, I got laid because I was American. London has good strip clubs. Strippers are the same as musicians. They have the same hours and people have money to spend.

Sleaze Roxx: From watching the movie, I picked up on the fact that there have been a few singers in the band. Do you know the exact number?

Kenny Wilkerson: I am not sure really. Kevin was the original guy. He was actually from British Columbia, Canada. J.P. actually knew him. He was young. He was with us for five years. It was a crazy time. In terms of the movie, back then we kept a lot of the footage. I have a shitload of VHS tape. Primarily it was because if we had a new drummer, we would watch it to see how it sounded. 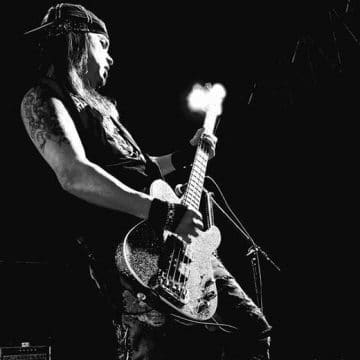 Sleaze Roxx: Nova Rex is on the Top 50 hair metal bands of all time on VH1.

Kenny Wilkerson: Yes, we’re number 48 out of 100. We’re between Bulletboys and Firehouse. When it comes to these bands, the difference between bands like Nova Rex and Bulletboys, Autograph, Lita Ford, etc. is that they primarily had one big hit, where we didn’t. I guess Lita Ford had “Kiss Me Deadly” and “Close My Eyes Forever” but still they can go out and sell tickets with one or two big hits.

Sleaze Roxx: I guess the same goes for LA Guns with “The Ballad of Jayne”. Faster Pussycat with “House Of Pain”

Kenny Wilkerson: Yeah, exactly. Speaking of those ’80s type bands, back in the ’80s, J.P. and I went out to L.A. and rehearsed with Pretty Boy Floyd. It was just the drummer, who’s name I can’t remember. And Steve Summers. It was pre-Leather Boyz.

Sleaze Roxx: That’s very cool. Was Ariel Styles around then?

Kenny Wilkerson: That name doesn’t ring a bell, so probably not.

Sleaze Roxx: Do you guys still have any sponsorship with Anheuser Busch?

Kenny Wilkerson: Yep, still have it. Each state had the program. The State of Indiana had one. It got us high profile gigs. We did a birthday bash with Jackyl. We did Cheap Trick, David Lee Roth. So when we got back playing, I called them. Their offices are in St Louis. We had a meeting with the head of marketing and promotion. I’ll also make mention of my affiliation with G & L Guitars. I have an endorsement. 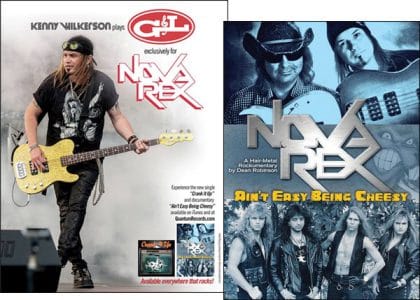 Sleaze Roxx: What can you tell me about Nova Rex being in the Smithsoneon?

Kenny Wilkerson: I took an outfit. Some bands were pissed because we’re in there. We were doing a tour recently past there. So we said “We’re going.” This is cool because it’s something our great, great grandsons will see. So we’re representing. Also besides this, it’s in my local hometown museum. I’d called them up and I said I have all this stuff. They had me there and my parents. 500 people showed up. I also called the Hard Rock Cafe. They said they’d take whatever I’ve got. So it wasn’t the actual restaurants, but they have a museum. So it is in there indirectly. In the Hard Rock museum.

Sleaze Roxx: So thank you Kenny.

Kenny Wilkerson: No problem. So are you gonna make it out to any of the shows in Canada?

Sleaze Roxx: I will be at the Rockpile show September 1st.

Kenny Wilkerson: Okay, we’ll see ya in a few months.