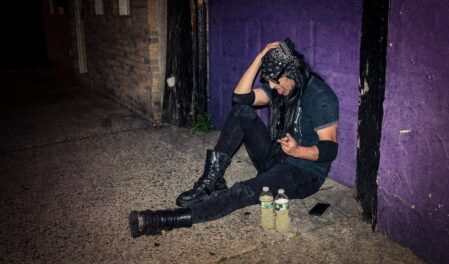 Going to a Pretty Boy Floyd concert makes you feel like you’ve literally stepped right back onto the Sunset Strip! The songs, the screams, the showmanship… and even the liquor. I remember my very first Pretty Boy Floyd show, many years ago. I was in the crowd when Steve Summers said something about Jagerbombs. “We got any Jagerbombs? Bartender?? Can the band get some Jagerbombs? I don’t think she’s listening to me. I’m not even sure this mic is on.” I took that as my queue to go to the bar, order five Jagerbombs, carry them up to the stage and present them to the guys between songs. Steve was so happy to see them arrive that he said, “Where are you going buddy? You bought these, you’re coming up here and doing them with us onstage!” That was my introduction to the 100mph personality of Steve Summers. The man always makes me laugh and about those Jagerbombs…

Well, I was at a Pretty Boy Floyd show a couple weeks ago and someone bought the band a round of Jager shots. Steve grabbed one, drank it, then immediately grabbed another one, leaned down and offered it to me. Now, we’re even! I was fortunate enough to grab Steve to do a quick little interview. After you read it, if you haven’t seen them lately, make a point to do that! Yesterday, they just jumped on a plane to head to Europe for 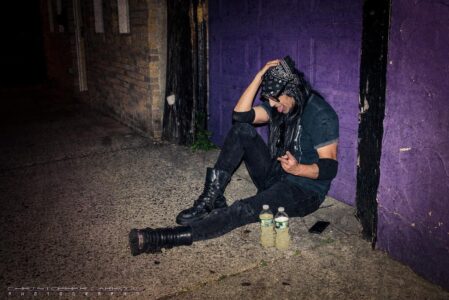 three weeks where they will play shows and festivals (dates in the article) and then they’ll be back in the US for the third leg of the Glam Slam US tour! Do yourself a favor, catch up with these guys and have some fun! Tell them Chris sent you (and they might let you buy them a Jagerbomb)!

Sleaze Roxx: Steve, You’ve been busy! Pretty Boy Floyd has been on the road for a while now.  You’ve just completed two legs of the Glam Slam Tour. I got to come out and see a couple of those shows, myself — Dingbatz in New Jersey and the Masquerade event in Philadelphia. Both were a blast and now I hear you are heading to Europe. Tell me about that.

Steve Summers: Oh yeah, bud, we have been very busy! More than usual, my friend. Yeah, great seeing you at those shows! Good times! Yeah, now it’s time for our European Tour that starts August 18th in Norway.  So we are going to Norway, Sweden, the UK, Italy, Belgium and Switzerland for over three weeks.

Sleaze Roxx: That’s amazing! When is the last time you toured over there?

Steve Summers: Well, a couple years before Covid came along, we hit a few of those places but either way it’s been way too long.

Sleaze Roxx: What’s the best part about playing over there? What are you looking forward to, over there? 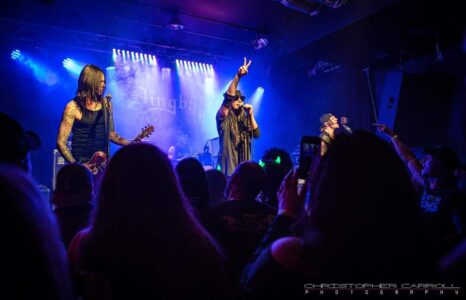 Steve Summers: Well hey, we love everywhere we play but everyone knows the fans are crazy over there and we are doing a few cool festivals with some great bands over there like Hardcore Superstar, Crashdïet and more. So that’s a pretty sweet mix. The Hollywood Sleaze with them cool cats! I believe, for a couple of our guys, it might be the first time they are hitting some of these places so that’s always cool. I’m actually looking forward to the whole thing. Our fans are so awesome. It’s just great to play and party with them Pretty Boy Floyd style.

Sleaze Roxx: The Masquerade show was just a couple of weeks ago and you guys sounded great and were full of energy. How do you keep that up?

Steve Summers: Ah thanks bud! Yeah, that show was extra sweet. Oh hey man, every show, we try and make the best show. Or do you mean my magical kick ass stay young and full of energy regimen? 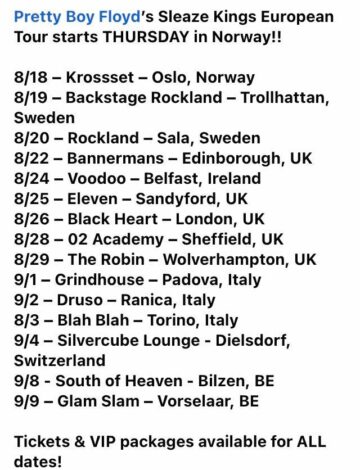 Sleaze Roxx: Ha! Well, you definitely come out on fire! You run circles around the younger guys. You guys all seem to have a blast on the road… Any funny or interesting road stories lately?

Steve Summers: Yeah, we have a blast — always. We are very grateful to be doing this and the whole Pretty Boy Floyd team works pretty damn hard so we try to enjoy every moment. Oh pal, there’s always a new story! Our main concern is — Can we please get something other than pizza and burgers from the promoters and a few damn waters during sound check? We [are] thirsty! Just saying. Wait…. We only run circles around the younger bands?

Sleaze Roxx: [Laughs] It’s nice to see energy and enthusiasm onstage these days because so many bands just ‘phone it in’ so to speak.

Steve Summers: Well, when you get paid 10 times what we make, I guess you can phone it in. But with us, we have always been a fucking rocket ship ready to explode. And I believe we have exploded a few times….. It was ugly.

Sleaze Roxx: Ha! Tell me about one of those explosions!

Steve Summers: Chris, no! I have the same energy or more then when I hit the Whisky A Go-Go back in 1988. I just love doing it and being with the fans. Another cool thing is I believe this is the first time we are playing ‘Leather Boyz With Electric Toyz’ in full and more. So very cool for new and old school fans. Very cool to gain more fans from that HBO max series ‘Peacemaker’. That was a good kick in the ass for Pretty Boy Floyd. C’mon, number one series in February and John Cena rocking our shirt. Cool shit.

Pretty Boy Floyd‘s “I Wanna Be Your Man” video (from Leather Boyz With Electric Toyz album):

Sleaze Roxx: Yeah, that was quite a surprise! It looks like you brought one of your coolest shirts back into print following that series! So, with two legs into the Glam Slam tour and a third to come. What’s the best part of being on the road?

Steve Summers: Well, nothing beats a paid vacation pal. Yeah, we start up again with Enuff Z’Nuff and The Midnight Devils in October but before that, we play the Whisky on Friday, September 23rd, then Saturday in Las Vegas at Vamp’d and more. Damn cool year! 2023 will be awesome and then some. We are just warming up. Oh yeah, that original Leather Boyz shirt is a hot one! 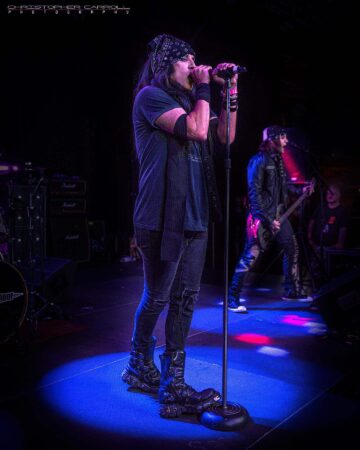 Sleaze Roxx: And… did I hear there is new music coming from Pretty Boy Floyd?

Steve Summers: Yes bud, new record in summer of 2023. Let’s see how many times I can say bud and pal. Have you been counting?

Sleaze Roxx: How far along are you with the album?

Steve Summers: Kris [Majors] and I did all the writing. All the music is done and we are currently doing lead vocals in between tours. Let’s just say new kick ass Pretty Boy Floyd in the summer of 2023.

Sleaze Roxx: How is Kristy Majors?

Steve Summers: I will say again for the fans — Kris and me are very cool. Me and Kris are partners in Pretty Boy Floyd and he will return to the stage whenever he wants. Just saw him yesterday! We had a Berry Protein drink at Jamba Juice in between recording yesterday. How’s that? Maybe tomorrow, we will have a nice steak dinner.

Sleaze Roxx: [Laughs] What can we expect on the new record?

Steve Summers: What can we expect? Well, every band says the same thing about their next record so let’s just leave it at “Unfucking believable!” Pure Pretty Boy Floyd.

Sleaze Roxx: I noticed you’ve been doing a lot of Meet and Greets after the shows. Are you going to offer that to fans on the European shows?

Steve Summers: Oh yeah bud. They are packed already. We offer that at every show. Soundcheck, [meets and] greets, backstage, dinner with the band — the experience is endless. We love it. We have no hits so we have to give them a damn rock n’ roll circus for their money. We love them. Nothing like partying with the fans VIP style. We are so nice we even let them bring us bottles of our favorite liquor and some sushi and lobster. It’s a fabulous experience for everyone!

Sleaze Roxx: Wow! You guys know how to have a good time [laughs]! That’s funny… I do remember, at Dingbatz, a fan showed up with two full steak meals for you! Outside of the shows, is there anywhere you’re planning to go, visit or see while you’re over there? 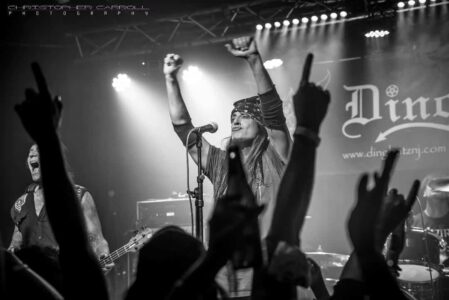 Steve Summers: Let me make this simple. The guys will visit everything imaginable all day and night between shows and I will find the local strip bar. Just kidding. I’m a ‘give me a killer hotel’ guy and see you at the show. [In terms of the Dingbatz show] Oh that was great! We even walked across the street together and he bought us steaks and potatoes. I saw him at the Masquerade. I said, “Hey, it’s Steak and Potatoes.” Way cool guy. Great fan.

Sleaze Roxx: You always seem to be looking to get out there with the fans. What’s the best way for fans to keep track of that or know about your Meet & Greets, and stuff?

Steve Summers: All social media, pal. But really, grab me personally on my personal Instagram or Facebook for all the Meet and Greets, etc. Our main pages are bombarded with every question imaginable so it could get lost. Fans can even email me at Summerspbf@yahoo.com. Also, we are bringing a really cool young band with us on the European run — The Roadkillz.

Sleaze Roxx: Anything else going on?

Steve Summers: Well, I did have a nice conversation with Ted Poley today so I believe that’s pretty cool. Ted’s a very cool guy. We have slowly begun to know each other more so you might see some Pretty Boy Floyd and Ted with the Floyd’s next year or some Danger Danger classics with some Floyd. That’s a damn hit.

Sleaze Roxx: Has it been any fun touring with Enuff Z’Nuff?

Steve Summers: Oh yeah, they’re one band I’ve always enjoyed playing with. Well there’s many but Chip [Z’Nuff] and the boys are always fun times. Chip knows if he gets out of hand, our bassist will floor him with one shoulder slam so he’s always on good behaviour! Just saying… Hi Chip. Anyway, can’t wait to see you all! Pretty Boy Floyd European Tour starts Aug 18th and lasts for over three weeks. Make your plans, glam it up and come on down.