Sleaze Roxx: Pretty Boy Floyd is playing the M3 Rock Festival, one of the biggest festivals of the genre next week!  I know you guys have played it before but still, that has to be exciting!

Steve Summers: Yes, we’ve played the M3 Rock Festival twice, I believe now, so this will be our third or fourth time, maybe. We love playing it. The festival caters to our fans so it’s perfect for us!

Sleaze Roxx: I hear the plan is to play [the album] ‘Leather Boyz With Electric Toyz’ from start to finish….

Steve Summers: That is the plan! We should be able to pull this off but….. if there is a technical difficulty that eats up a couple of minutes or a band is late or something delays the schedule, that’s really the only thing that will prevent us from playing every track on the album. Fear not! You will be hearing “Leather Boyz [With Electric Boyz]”, “Rock And Roll (Is Gonna Set The Night On Fire)”, “Wild Angels”, “Forty-Eight Hours”, “Toast of The Town” and all the songs you love.

Steve Summers: Well, I will be there for sure! On guitar, we will have Eric Griffin, who is one of the original Murderdolls. He also currently plays with Genitorturers among other things. We have Diego Ibarra (Ashes) on bass who has been in Pretty Boy Floyd on and off and is a buddy of mine for close to 15 years. He is also in DevilDriver and was in Wayne Static’s solo band. On the drums, another mystery man… who goes by ‘The Living Dead Drummer’!  His current or past bands are The Rhythm Coffin, Michael Grant & The Assassins, V2A, Fleischkrieg and DK-Zero.

Sleaze Roxx: So what about Kristy Majors?

Pretty Boy Floyd: Oh, me and Kristy are great. He’s my bud, he’s my partner, I just talked to him a couple days ago. He just won’t be able to make this show due to some scheduling business conflict but we are all good. Hopefully, he’ll be at the remaining 30th [year] anniversary shows. We got the M3 gig when a band pulled out so it was kind of last minute. We are working on new Pretty Boy Floyd music. We almost had the entire record finished but then Covid hit and slowed things down. We are going to focus on finishing the record, take the rest of the year to finish touring to support the ‘Leather Boys 30th Anniversary’ and then, ideally, release the best Pretty Boy Floyd record the world has ever seen next summer.

Sleaze Roxx: Oh wow! You think it will be the best? Steve Summers: Chris, we certainly aren’t trying to make it the worst [laughs]! I’m excited about everything we are working on.  Why can’t Pretty Boy Floyd put out our best album yet?  There are no rules in rock n’ roll!  I keep hearing rumors that many of our heroes are retiring so am I going to retire with them? Hell no! We want to step up and take the helm! Lead the charge!

Sleaze Roxx: Speaking of our heroes, over the last couple of years, we’ve seen videos of famous singers from the ’80s who don’t seem to be able to pull their weight, vocally, anymore. Your voice has held up very well. Last time, I saw you a couple of years ago, you sounded just like you did on the record but with over a year off, what do you think about hitting the stage and singing those songs again? Will you need to knock off the rust?

Steve Summers: I’ve been singing the whole time, doing some recording [and] rehearsing! As a matter of fact, yesterday, I sang the whole record while hiking up a mountain with a weighted vest on and a kettle bell in each hand. I didn’t just sit on the couch this whole time. Are you coming to the show?

Sleaze Roxx: So about this whole pandemic? You say you’ve stayed busy. What have you been doing? Steve Summers: Well, I’ve already told you about the new Pretty Boy Floyd record but I’ve also been working on putting an all star band that was going to debut last year but didn’t due to Covid. I handpicked guys that I like from bands that I love and our intention is to go out and play songs from each of our prospective bands. It’s going to be a great all star glam band with guys from all over the world.

Sleaze Roxx: Can you tell us the name?

Steve Summers: Uh, no but I also put another original band together. We’re writing songs as well and preparing for the future.

Sleaze Roxx: Is it anything like Pretty Boy Floyd?

Sleaze Roxx: So, many of the bands from this genre have made their comebacks but, correct me if I’m wrong, Pretty Boy Floyd never really went away. Over all these years, you guys have, with little exception, played shows, put out product, carried on. The band wasn’t multi-platinum selling so how have you been able to keep it up for all these years?

Steve Summers: Yes, with the exception of a year here, or a year there, we’ve kept it going. We may have had to find a new member here or there but me and Kris [Majors] have never stopped Pretty Boy Floyd and we are not about to shut it down now. We have a great fan base, all around the world so we are going to keep this glam / sleaze party rolling for as long as we can. Hey, someone’s gotta wave the glam flag!

Sleaze Roxx: OK, over the years, I’ve heard some rumors and if you don;t want to talk about them, you don’t have to, but I’m curious so I’m asking! I’ve always heard you were somehow involved in the strip club business! Owning, managing, DJ’ing… Is there any truth to that?

Steve Summers: This is actually 100% true. Over the years, I’ve managed, DJ’d and, along with my older brother and best bud, Mitch, who recently passed away, we even owned a couple clubs together. He was actually Pretty Boy Floyd’s first manager. The adult industry is a crazy business! I could tell you some stories [laughs]! 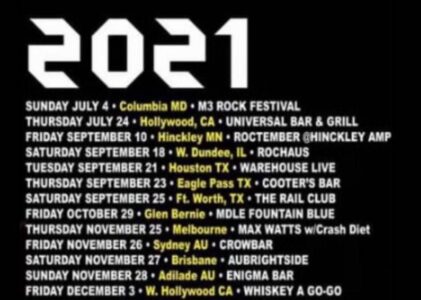 Sleaze Roxx: I also heard that you were involved with the [Ozzy] Osbourne family at some point doing fitness training or something. Is that one true too?

Steve Summers: You are on a roll, my friend! Guilty as charged. I was, and still am, a personal trainer and while I am not going to name my past or current clients, I can tell you that you would recognize a lot of them. Why do you think I’m running up mountains, singing, with kettle bells in my hands?  Just because I’m a lunatic? There’s a method to that madness. I need my cardio for the stage because if I can sing that album under those conditions, then doing it onstage will be a cake walk.

Sleaze Roxx: I just remembered, the last time you and I talked on the phone, you were calling me from overseas, you were all hyped up because after a good set at a festival, you said that six huge security guys at the festival had picked you up by your arms and legs and literally carried you out of the festival and kicked you off of the property! They did this after you guys got a great response from the crowd while you were onstage! You hung up saying you would have to call me back and give me the details, but I didn’t hear back from you….. Do you remember this and, what was that all about?

Sleaze Roxx: MILD? You were physically ejected from your own concert [laughs]!

Steve Summers: Yeah, but… you know… that’s rock n’ roll. It was all worked out. Everybody’s fine.

Sleaze Roxx: OK, well, if I’m not getting those details, give us a good road story. I know you have a million of them!

Steve Summers: Well, you’re coming to the show, right? We’ll talk about the road, the clubs, etc. while we’re hanging out having a beer backstage.

Sleaze Roxx: Any chance of hearing some of your new music?

Steve Summers: Sure! I’ll send you a snippet of a song from my new original band that you’ll hear all about next year.

Sleaze Roxx: Excellent!  I’ll share that. Great talking to you, Steve! You always make me laugh.

Steve Summers: Good talking to you too Chris and I’ll see you at M3!