BACK IN 2016, AMERICAN BOMBSHELL GUITARIST STEVE BOYLES CONTACTED SLEAZE ROXX ABOUT REVIEWING THE GROUP’S DEBUT ALBUM ‘NO REGRETS.’ THAT RECORD WAS SO GOOD THAT IT LANDED AT #6 ON THE SLEAZE ROXX’S TOP TEN ALBUMS OF 2016. BACK ON MARCH 29, 2019, AMERICAN BOMBSHELL RELEASED THEIR SECOND ALBUM ‘TATTOOED ‘N BRUISED‘ VIA THE RECORD LABEL EMP LABEL GROUP. HOWEVER, IT WAS ANNOUNCED 18 DAYS LATER THAT BOYLES WAS NO LONGER PART OF THE GROUP 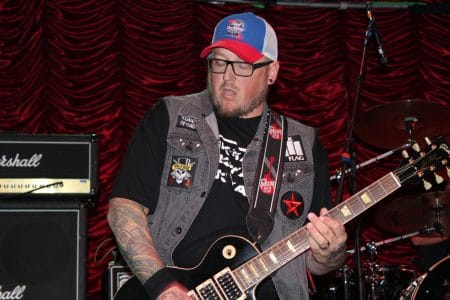 . A LITTLE WHILE BACK, BOYLES RESURFACED WITH A NEW BAND CALLED SH!TL!ST AND A LYRIC VIDEO FOR THEIR DEBUT SINGLE “HELL ON HOLD.” SLEAZE ROXX CAUGHT UP WITH BOYLES TO FIND OUT MORE ABOUT SH!TL!ST AND A LITTLE BIT ABOUT HIS TIME IN AMERICAN BOMBSHELL.

Sleaze Roxx: Before we start talking about SH!TL!ST, I was very curious about your abrupt departure from American Bombshell earlier this year and shortly after the group released its sophomore album ‘Tattooed ‘N Bruised.’ Your departure was announced 18 days after the album was released. I understand that you were the founder of the band and the group had just signed on with the EMP Record Label. So what happened? What led to your departure from American Bombshell?

Steve Boyles: Well without going into too much detail, there had been years of not everyone seeing eye to eye on some things. All bands have their issues obviously and you just have to decide when enough is enough. I personally wasn’t having fun anymore playing. We had some personal things happen and it was just time for me to go.

Sleaze Roxx: You are resurfacing pretty quickly with a new group and an engaging new song. What led to the formation of the group SH!TL!ST?

Steve Boyles: Yeah man. When I left American Bombshell, I already had a bunch of songs written and probably a month after, Ritchie Wilkison [lead guitarist] hit me up and asked me what I was doing and that he wanted to jam with me. I’ve always loved his playing and couldn’t say no. He has known Shawn Nugent [bassist] for many years and asked him if he would be interested 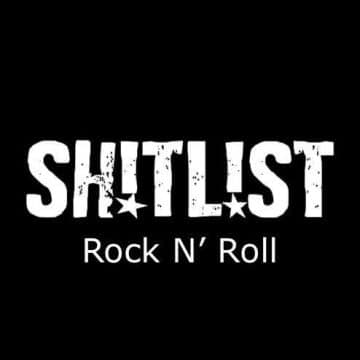 and he was totally down once he heard some of the material we were working on. We actually started out with another drummer and singer but life sometimes smacks you in the face and they couldn’t commit to the band anymore. So we made a few Facebook posts and found Nate McCombs [lead vocals] and his cousin Jeremy McCombs [drums].

Sleaze Roxx: I’ve got to ask. How did you guys come up with your band name?

Steve Boyles: I actually got the name from Tim Mosher and Pat Muzingo’s [Junkyard] old band Suckerpunch. They had a song called “Shitlist” and it just made sense to me to use [it] because we are all on someone’s shitlist [laughs]. I did ask Tim and Pat if they had a problem with me using it before we made it official and they were totally cool with it. I love those guys.

Sleaze Roxx: Speaking of Junkyard, American Bombshell received a lot of support from the band over the years. You even had David Roach do a guest appearance on the last album [‘Tattooed ‘N Bruised’]. How did American Bombshell connect with Junkyard and how important has it been for the band to have that connection / tutelage?

Steve Boyles: Those guys are great! I absolutely love everything about those guys. They have been my all-time favorite band since 1989. We luckily got to open for them in Green Bay — thanks to Kenda and Jesse Brunette — and we just hit it off. We played shows with them anytime they came to the Midwest. Junkyard has been super important to Amercican Bombshell. We had some really good times. I talk to Pat and Tim almost weekly [laughs].

Sleaze Roxx: Getting back to SH!TL!ST, how did you come up with the exclamation marks instead the two “i” in the band name?

Steve Boyles: I just wrote it that way right off the bat. Didn’t even think about it.

Sleaze Roxx: SH!TL!ST’s first single “Hell On Hold” seems a bit more simple and straightforward than the American Bombshell material. How do you find that the music from the two bands differ?

Steve Boyles: Well, the music on my end is going to be very similar as far as riffs go. When I write a riff, I usually can hear everything in my head on how I want the song musically to sound. I love rock n’ roll and punk music. Just keeping it simple and catchy.

American Bombshell‘s “No Regrets” video (from No Regrets album):

Sleaze Roxx: SH!TL!ST apparently have a demo available. How many songs on the demo and how can people get a copy?

Steve Boyles: Yes sir. It’s only two songs. We wanted to put something out quick so people could hear what we sound like. When we recorded, Nate and Jeremy were only in the band about two weeks and had two practices with us. Shoot us an email at shitlistrnr@gmail.com and we’ll send it to you.

Sleaze Roxx: I understand that you guys have more songs coming and an album coming in the future. What’s the timelines in that regard?

Steve Boyles: We have about ten songs written musically on the guitar side of things and about 60 other riffs laying around. We just started practicing again this week so hopefully within the next couple months, we will be ready to play a show and get into the studio to record.

Sleaze Roxx: What’s the writing process like for SH!TL!ST?

Steve Boyles: Well, we all put in the work on these songs. I usually come up with the main riff whether it be a verse or a chorus and everyone writes their own parts over that.

Sleaze Roxx: Getting back to American Bombshell, which album did you prefer and why? ‘No Regrets’ or ‘Tattooed ‘N Bruised’?

Steve Boyles: That’s a hard question… I liked them both but if I had to choose it would be ‘Tattooed’ only because it has my favorite song on it — “Run Away.”

Sleaze Roxx: How did American Bombshell end up with the EMP Label Group, which as far as I know, caters to more established older bands? 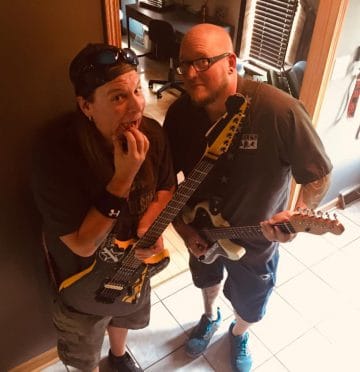 Steve Boyles: We got hooked up with EMP through Drew Fortier! We met Drew when we opened for Bang Tango. I love that guy and his wife Tharasa so much! Drew was working a lot with Thom [Hazaert] at EMP and he had him come to Indy to see us play. We made a deal and that was that.

Sleaze Roxx: Are there any thoughts of SH!TL!ST hooking up with the EMP Label Group or any other record label?

Steve Boyles: Probably not with EMP but we are definitely open to working with anyone.

Sleaze Roxx: Will SH!TL!ST be including American Bombshell songs in their setlist or have you totally moved on from that band?

Steve Boyles: No, we have enough material to get us by [laughs].

Sleaze Roxx: Going back to your beginnings as a musician, how did you end up playing guitar?

Steve Boyles: I always loved music and asked my mom and dad for a guitar in probably fifth grade. I took a couple lessons and started writing my own songs. I’ve never been into playing other people’s songs honestly.

Steve Boyles: Yeah man. I wanted to thank you for taking up your time to reach out to me and giving a shit about anything I’ve ever done! It’s very much appreciated!

Sleaze Roxx: [Laughs] Anyone who plays quality music will have Sleaze Roxx’s attention. Last question for you — what are your top three favorite albums of all-time and why?

Audio of American Bombshell performing “Run Away” live at the Slippery Noodle on August 18, 2018: