We caught up with Crystal Viper singer/guitarist Marta Gabriel earlier in the year as she was doing press for the band’s latest album ‘The Cult.’ Well, she’s back this time with a solo album where she has paid homage to some of her favorite female artists and female fronted acts. Amongst some of the artists that Gabriel included on the new album ‘Metal Queens’ are Lee Aaron, Wendy O. Williams, Leather Leon (Chastain), Doro Pesch (Warlock) and Ann Boylen (Hellion). Sleaze Roxx caught up with Gabriel on June 24th, 2021 as she did press for the album ‘Metal Queens’ which is due on July 30th, 2021 on Listenable Records. 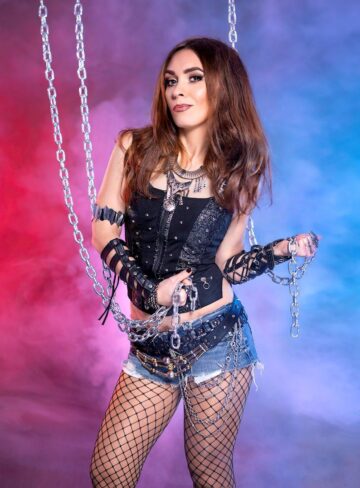 Sleaze Roxx: You received some excellent reviews for the latest Crystal Viper album ‘The Cult.’ I’m excited for you because ‘The Cult’ is the next logical step from the ‘Tales of Fire And Ice.’

Marta Gabriel: The response to ‘The Cult’ was good. You know, it’s always nice when people like the album that you’ve just released. The truth is, we really didn’t know what to expect. The album was recorded in a totally different environment. We were working on that album totally remotely from each other. We all live in different countries and it was also our first album with our new drummer. The response is very good, and we are very happy about that.

Sleaze Roxx: One more thing on Crystal Viper before we move onto the ‘Metal Queens’ album. What is the plan for any live shows for the second half of 2021? Is that going to be possible for you? Will it be a tour or perhaps some special appearances?

Marta Gabriel: To be honest with you, I really don’t know. The Coronavirus situation changes here in Europe from one week to another. There are different regulations in different European countries… I don’t know. We had some live shows scheduled for this summer, but some of them have been cancelled or postponed. There are still some live shows left, but I am not sure that they will happen. I really hope this happens. I haven’t seen my bandmates since March 2020! I think we’ll probably meet next month, so I am excited about that. I’m keeping my fingers crossed that some of those shows happen.

Sleaze Roxx: How have you been keeping your chops fine tuned during the pandemic? Do you practice on a regular basis and do vocal exercises?

Marta Gabriel: You know, this pandemic situation hasn’t changed anything in my life when it comes to music except for touring of course. I have always practiced playing my instruments, especially when I’m composing my own songs. When composing, I’m playing piano, I’m playing bass guitar and singing. It is like I’m always practicing. I do this every day. I can say this with all my heart that I am practicing all the time.

Sleaze Roxx: When I spoke with you a few months ago when you were doing press for ‘The Cult,’ you mentioned that you had a surprise that was coming later in the year. So here it is, ‘Metal Queens’, your solo album. Was ‘Metal Queens’ recorded at the same time as ‘The Cult?’

Sleaze Roxx: So, hold on a minute. So, you’re saying that in addition to ‘Metal Queens’, there is something else that you’re working on?

Marta Gabriel: [Laughs] Of course! [Laughs] ‘Metal Queens’ is not the only thing you’ll get from us this year [laughs]!

Sleaze Roxx: So, what inspired you to do an album like ‘Metal Queens?’ You could have done a solo album of original material? You could have covered all these songs with Crystal Viper?

Marta Gabriel: Classic heavy metal is my absolute favorite genre. It’s what is closest to my heart. It’s not a big secret that I’m a big fan of ‘ladies’ behind the microphone in heavy metal. This idea of creating this album is a little bit connected to Crystal Viper. Like you know, we like to record cover songs. Recording cover songs to me is showing the audience what my musical roots are and where I’m coming from as a metal musician. It shows everyone my musical DNA. I chose the idea of recording cover songs, done by female vocalists that I really like. That’s it [laughs]! I just wanted to record a tribute to my personal ‘metal queens.’

Sleaze Roxx: Did you draft a ‘wish list’ of songs you wanted to cover? That could get long, quick with all the material to cull from. Did you record additional songs that didn’t make the album?

Marta Gabriel: When I came up with this idea, I got a pen and paper and started to make a list. It was quick. The first list was very long [laughs]! I can’t even tell you how many songs, but it was very long! I shortened the list. When I had that list, I shortened the list to 10-11 songs, because we wanted to release this album on vinyl and the playing time on vinyl is limited, so I knew we needed about 10-11 songs total. The only difficult part for me was finalizing the list of 10-11 songs. It was hard! All the bands that I put on the list, the original list that I was talking to you about… I love them all equally! I also love those songs equally! I also really love the bands and the other songs that didn’t make the list of 11. I think it would be amazing, in the future, that I could record ‘Metal Queens’ Part II. I think that would be great, but it’s too early to even think about that right now! We haven’t even released the first album [laughs]! Let’s see what happens and how people like this album. If the fans like this album, then I will certainly record Part II. I’m sure the fans are fans of these songs, much like I have been for years. 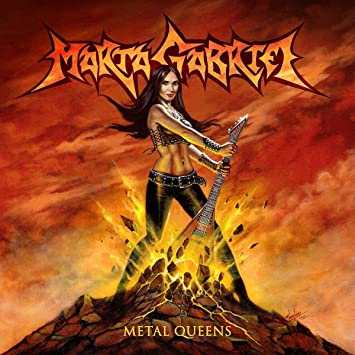 Sleaze Roxx: There’s a band that didn’t make the record that would have liked to have recorded, right?

Marta Gabriel: Wendy O. Williams was very original, and she was an extraordinary personality. She was so unique. You can watch some videos on YouTube, and you can see how she behaves on stage. She was the type of artist, that she went on stage, she was the right person, in the right place. I’ve watched all the videos and she looks like she was meant to be on stage. She looked like she was having so much fun on stage. I loved that about her and of course I also loved her voice.

Sleaze Roxx: I love that you covered Hellion, of course Ann Boleyn is the singer. “Bad Attitude” just fits you so well.

Marta Gabriel: When I wrote the band Hellion on that piece of paper that I was talking to you about earlier, the song “Bad Attitude” was naturally the song that I wrote down [laughs]! I didn’t even think of another song [laughs]! I think I can say that it’s just about the same story with all the other songs on the album. I wrote down the name of the band and I knew what song I wanted to record. I think the only song that I needed to think about longer was the Warlock song. I had to take more time to think about that one.

Sleaze Roxx: I love your cover of “Metal Queen” by Lee Aaron which is also the title of the record.

Marta Gabriel: That’s an amazing song. She’s a fantastic singer. It’s one of my dreams to see her live one day. Out of all of the artists that I covered on the album, the only ones that I have seen are Doro and Leather Leon [Chastain].

Sleaze Roxx: Would you ever want to collaborate with any of the artists that you paid tribute to on the album? 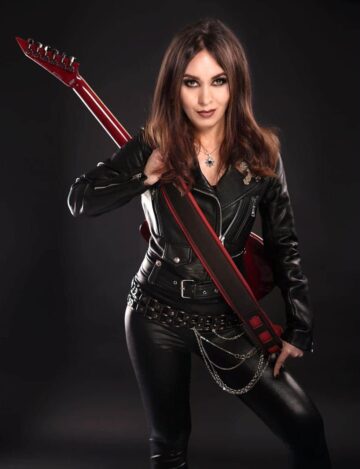 Marta Gabriel: If the opportunity to work with Lee, Doro, Ann or Leather came up, I would do it. You know, I was thinking about doing something like maybe asking some of my female friends to sing on my record. Then I thought about it, and it would just be so obvious [laughs]! I wanted to do something unexpected and different.

Sleaze Roxx: Looking down the road, in the future, does something like recording Crystal Viper albums and doing solo original albums interest you?

Marta Gabriel: Oh, yes! It does. I have been thinking about that a lot and I am thinking about recording my solo album with all original songs. It won’t happen this year, because that would be too many things for one year!

Sleaze Roxx: So, you have ‘The Cult,’ ‘Metal Queens’ is coming July 30th, you have this undisclosed project that you don’t want to talk about at the moment. I’d say you’ve made the best out of this time during this pandemic.

Marta Gabriel: Right after ‘Metal Queens’ was done and mixed, I joined another band, but as a bass player. I’m in Cerdrick Forsberg’s Blazon Stone. I’ve recorded an album with them, not as a singer but as a bassist! This is another album that will be released this year. So we have ‘The Cult,’ then ‘Metal Queens’ and then the Blazon Stone album, which will be coming out soon.

Sleaze Roxx: So how was it to just play bass on that Blazon Stone album?

Marta Gabriel: It was fantastic, because I love to play bass guitar. I love it so much that I played the bass guitar on the ‘Metal Queens’ album as well. I love playing guitar in Crystal Viper but I also love playing bass. Right now, it looks like I will get to play a lot of bass guitar, because when Blazon Stone releases their album, they will tour and I will be performing with them. This will be kind of a new experience for me.

Sleaze Roxx: What song was the most challenging for you on ‘Metal Queens’ as a bassist?

Sleaze Roxx: What are some words of encouragement do you have to any young ladies wanting to start a career in heavy metal?

Marta Gabriel: Oh, wow! Okay, I would say something like this — if you really want to do this, follow your heart and do it! I would also have to say practice, practice, practice. You need to work hard, but you also need to enjoy it, because if you’re writing songs and you’re not satisfied, it just makes no sense. This year in 2021, it is my 30th anniversary as a musician! This year I turn 37. It all started when I went to music school and started playing piano when I was 7 years old. I feel old for the first time in my life [laughs]!