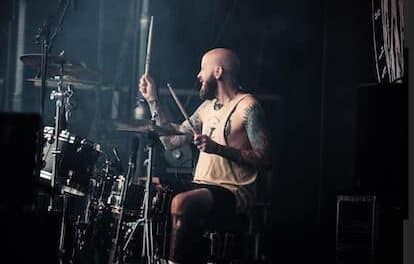 WE HAD TO WAIT TWO AND A HALF YEARS FOR SISTER SIN’S MUCH ANTICIPATED LIVE “CLASSIC” LINE-UP REUNION (DUE TO THE COVID PANDEMIC) BUT BY SEEMINGLY ALL ACCOUNTS, THE GROUP’S RUN OF MAINLY FESTIVAL GIGS THROUGHOUT THE SUMMER OF 2022 WAS A RESOUNDING SUCCESS. SISTER SIN’S “CLASSIC” LINE-UP CONSISTING OF LEAD VOCALIST LIV JAGRELL, DRUMMER DAVE SUNDBERG, 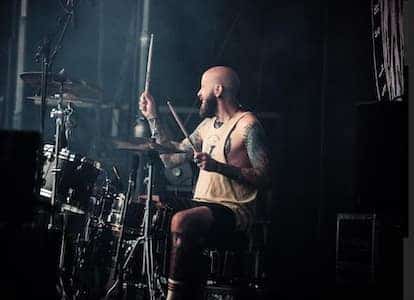 GUITARIST JIMMY HILTULA AND BASSIST STRANDH WERE JOINED BY RHYTHM GUITARIST FREDRIK JORDANIUS FOR THEIR SUMMER RUN AND HAD SO MUCH FUN THAT THEY WILL BE CONTINUING INTO THE FUTURE. SLEAZE ROXX CAUGHT UP WITH DAVE SUNDBERG TO FIND OUT HOW SISTER SIN’S REUNION WENT THIS SUMMER AND WHAT WE CAN EXPECT FROM THEM IN THE FUTURE.

Sleaze Roxx: Sister Sin’s long awaited comeback started with a club show at Backstage [in Trollhättan, Sweden] on June 18th. What prompted Sister Sin to kick off your live gigs there and how did it feel playing live together after almost seven years off?

Dave Sundberg: Since the pandemic and since we last were active, a lot of clubs we used to frequently visit in the Gothenburg area has since gone out of business. Backstage Rockbar in Trollhättan though is still here and we’ve probably been there five to six times before. Great atmosphere, awesome people and we consider the owner our friend. Also, one of our merch guys, Marcos, who tragically passed away, was from Trollhättan so it felt like the obvious choice. That show was above and beyond! Packed 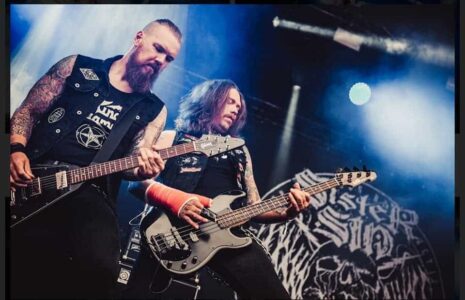 house, sweaty, singalongs and it felt real good to be able to pay homage to our beloved and missed brother Marcos in his hometown.

Sleaze Roxx: You had Fredrik Jordanius this time in the line-up. How has he fit in within the band and how have Sister Sin changed up your songs to add a second guitar player?

Dave Sundberg: Having Fredrik in the band added a new dimension and sound for sure. [He’s a] very skilled, technical and all-around musical guy. Starting with the ‘Now & Forever’ album, we began adding some keys, strings and second guitars in the studio to color the sound a bit. The songs kinda came dependent on those elements so we used some simple backtracks to re-produce it live. For me, having a second guitarist to get rid of those backtracks was crucial to sign up for the reunion shows because I hated using them back then. So having Fredrik with us gave us a fuller sound and a freedom to fuck around with the songs a bit. Having backtracks obviously didn’t let us do that in the past.

Sleaze Roxx: Strandh ended up playing all of the Sister Sin festival shows this summer shortly after having a “freak accident” at his day job where he ended up breaking three ribs and one of his thumbs. Was there any point where you thought that might not happen or that you need a replacement for him, and how hard was it for him playing with only a few fingers?

Dave Sundberg: Yeah, after he went to the hospital and was told that he needed surgery and two to three months recovery, Fredrik learned all the songs on bass. It wouldn’t have been the same, but we thought we couldn’t cancel the Finland dates so close on. The rest of the dates were a big question mark at that point. Lo and behold, Strandh pulled it off using some Geddy Lee 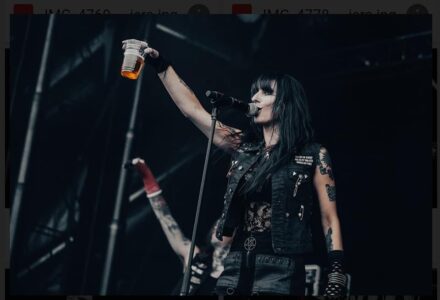 technique in combination with duct taping his picks around the index and middle finger [laughs]. He had to basically learn a whole new way of playing and I can’t even imagine how many hours of practice he put in to make it fly. Pure dedication. So big props to Strandh!

Sleaze Roxx: The Sauna Open Air festival in Finland was first up. How did it go and what was the feeling like playing a daytime festival once again?

Dave Sundberg: Weird thing is, and I’m only speaking for myself, but it felt like yesterday being at a festival again and performing at a stage that size. We did our fair share of festivals back in the day so that had to have something to do with it. Strange but yeah, certainly didn’t feel like seven years had passed.

Sleaze Roxx: Sister Sin got to play sometimes to some really huge crowds. I am thinking in particular of the photos that I saw from the Bandit Rock Festival in Stockholm, Sweden. How was that one and do you tailor your live show and set at all depending on the size of the crowd?

Dave Sundberg: Stockholm was great and one of the more well attended ones. It was cool n’ all but that day was so stressful because we travelled from another festival in the morning and got to the gig around an hour before the show. So it just flew by in a second and then we were done. I tend to not remember a lot from the shows themselves anyhow, if nothing extraordinary happens — one time a guy got stabbed — but seem to recollect more from the surroundings, venue, etc. But that’s just me. We have a set just over an hour worth. Sometimes, we do a full hour if that’s our slot, sometimes we do 45 minutes and then we cut 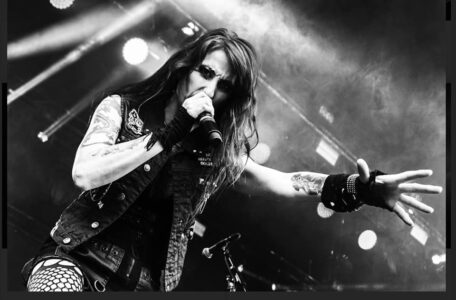 some tracks. Sometimes change-over takes a bit longer so we must shorten it down for that reason but all in all, it was pretty much the same 10 to 13 songs.

Sleaze Roxx: Given that Sister Sin have been away for a while, you had what could be deemed some challenging start times such as an early start time at the Time To Rock Festival or very late such as at Skogsröjet. How was it playing those somewhat unusual time slots?

Dave Sundgren: Yeah, we closed at Skogsröjet and we started at Time To Rock. We didn’t have any issues with it as we haven’t been active such a long time, so we were pretty much just glad there was a demand for us still. There was a lot of bands that rightfully had a better slot than us. I got a tad annoyed with Time to Rock though. We were originally scheduled for Saturday but got moved to open the festival early on a Thursday. A cover band played after us. What the fuck [laughs]? But it’s all good though. We had fun and the audience too if I recall correctly [laughs].

Sleaze Roxx: Do you have any funny stories that you could share that occurred while on your festival run this summer?

Dave Sundberg: Strandh seems to just gravitate towards chaos and shit going down so it’s always fun to be around him. I mean, the hand thing wasn’t funny per see but so typically him. Things just tend to happen when he’s around. A big-ass poodle 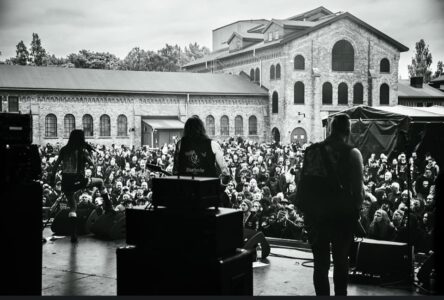 tried to bite his left hand — the good one — before the show in Gefle Metal. That would have been disastrous of course but again, so typically him, which makes it quite laughable. A lot was just like the usual debauchery back in the day. I remember having a quick cat-nap back in the bus after one of the Finnish shows and our TM Mikko wakes me up saying we have to leave immediately because the cops were coming and apparently Strandh and Jimmy got kicked out of the backstage area for smashing beers. Ironically enough, they didn’t do anything, but I guess when you see a 6’8 feet wobbly guy in a cast, you’re an easy target!

Sleaze Roxx: Were you surprised by the reception that Sister Sin received this summer from fans at the various festivals you played?

Dave Sundberg: Yeah, we were. Apparently we have a lot of die-hards out there and the Meet & Greets as well as the merch sales were great. So we’re really thankful for that in this day and age where music is so disposable with Spotify and what not.

Sister Sin performing “One Out of Ten” live at Bandit Rock Party in Stockholm, Sweden on July 30, 2022 (video from Benoît BP‘s YouTube page):

Sleaze Roxx: Sister Sin posted a somewhat cryptic message on Facebook on August 5th which stated in part: “Summer festivals done! Wait.. did you guys think yesterday was our last show ever?!

We’ll see you on the road soon again. Stay tuned.” This suggests that the band will be continuing… When did the Sister Sin members decide that this summer’s festival shows would not be their last?

Dave Sundberg: We basically decided before the last show that we had too much fun and, like mentioned earlier, too many fans out there still. It’s hard for new bands to start from scratch nowadays just to get to the point where we are now and it’s not something we take for granted. So we had chats about this and came to the conclusion that would be a waste to throw that away and let’s continue on a reasonable level. So if we get an offer and everybody’s up for it, we’ll do it. Not like the old days where we jumped on every chance we get. A much more relaxed approach.

Sleaze Roxx: Has there been any talk of releasing new Sister Sin music?

Dave Sundberg: We haven’t talked about new music, no. Everybody’s busy with their own thing but never say never. 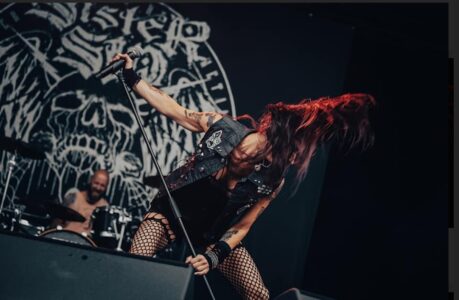 Sleaze Roxx: Well, that’s too bad but I’ll keep my fingers crossed [laughs]! What are the band’s plans for the future?

Dave Sundberg: To go with the flow and have a good time!

Sleaze Roxx: “Fight Song” ended up on episode six of the Netflix series Cobra Kai’s second season. How did that come about and are you surprised by that song’s continued appeal?

Dave Sundberg: It was cool and it came like a surprise. Friends started calling saying they heard “Fight Song” on Cobra Kai and when it was released on Netflix, stats doubled overnight! Apparently, our former publisher set it up without telling us. Then came Peacemaker on HBO Max where producer James Gunn had the good taste of selecting us and a lot of cool Swedish bands for the series soundtrack. That had a huge impact as well and you could really tell when doing these festivals that “Fight Song” was the song everybody wanted to hear! Hopefully we´ll get more placements like that because it´s easily the best promotion we’ve ever had.

Sleaze Roxx: Is there anything else that we haven’t covered that you would like to mention?

Dave Sundberg: I believe we’ve covered a lot [laughs]. Thanks for still caring about Sister Sin and all the best to you and Sleaze Roxx!