MY MOST RECENT INTERVIEW WITH STEELHEART SINGER MILJENKO MATIJEVIC WAS ONE THAT I WAS SOMEWHAT NERVOUS ABOUT. MATIJEVIC IS A VOCALIST THAT I HAVE ADMIRED FOR MANY 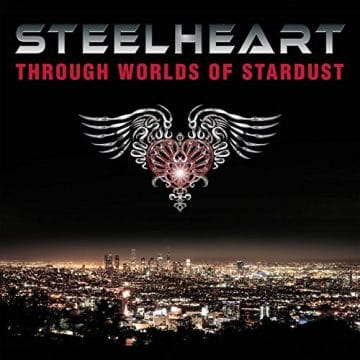 YEARS NOW. MY NERVOUSNESS WAS BASED ON THE FACT THAT I REALLY DIDN’T KNOW WHAT TO EXPECT. WHEN IT COMES TO TALKING TO SOMEONE THAT YOU HAVE THE UTMOST RESPECT FOR, YOU DON’T WANT TO SAY THE WRONG THING OR TO PUT IT BLUNTLY, YOU DON’T WANT TO BE LET DOWN. IN THIS JOB, YOU MEET CERTAIN MUSICIANS THAT YOU HAVE ADMIRED FOR YEARS. SOMETIMES AT THE END OF THAT MEETING, YOU END UP SAYING TO YOURSELF, ‘WOW, THAT GUY WAS A COMPLETE JERK.’

WELL, LET IT BE KNOWN, THIS IS NOT THE CASE HERE. MATIJEVIC WAS SIMPLY AMAZING. THE TIME WE SPENT TALKING WAS SOMETHING THAT I WILL REMEMBER FOR A VERY LONG TIME. OUR THOUGHTS ON THE MUSIC SCENE IN GENERAL WERE PRETTY MUCH THE SAME. MATIJEVIC HAS A WAY OF PUTTING THINGS VERY MUCH IN PERSPECTIVE AND HIS ANSWERS ARE VERY WELL THOUGHT OUT. I HAD MENTIONED IN OUR DISCUSSION THAT I HAD SEEN HIM BACKSTAGE AT THE LOUD N LIMA EVENT BACK IN JULY. HIS RESPONSE TO ME WAS, ‘WHY DIDN’T YOU COME SAY HELLO?’ THAT IN ITSELF MADE ME FEEL COMFORTABLE. MY PERCEPTION OF MATIJEVIC IS THAT HE WORKS VERY HARD TO KEEP THE SPIRIT OF HARD ROCK ALIVE. YOU CAN HEAR THE ENTHUSIASM IN HIS VOICE WHEN TALKING OF THE NEW STEELHEART ALBUM ‘THROUGH WORLDS OF STARDUST.’

I TOLD MATIJEVIC RIGHT FROM THE GET GO THAT I ONLY WANTED TO TALK ABOUT THIS NEW RELEASE. FROM THAT POINT ON, IT ALLOWED THE INTERVIEW TO FLOW NICELY. WHY TALK ABOUT THE PAST WHEN THE PRESENT IS SOMETHING TO BE EXCITED ABOUT? SO THANK YOU MILJENKO MATIJEVIC FOR THE OPPORTUNITY TO PICK APART THIS STELLAR PIECE OF NEW MUSIC. MY HOPE IS THAT PEOPLE READING THIS INTERVIEW WILL GRASP ONTO THE ALBUM AND ENJOY IT FOR WHAT IT IS. LISTEN TO IT AS A RELEASE IN 2017 WHILE NOT HOPING FOR A REHASH OF 1990. IT IS OBVIOUS THAT MATIJEVIC PUT A LOT OF TIME AND EFFORT TO BRING FORTH A TRUE PIECE OF MASTERY. 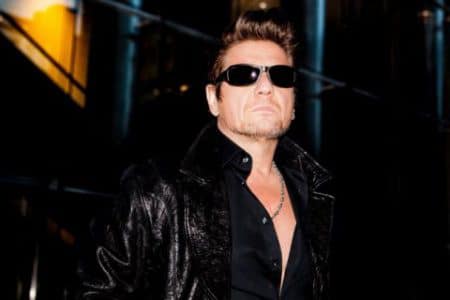 Sleaze Roxx: Great to talk to you! Right off the bat, let’s talk about the new album ‘Through Worlds of Stardust.’ What was the general feeling on this album? It has the obvious SteelHeart sound, but in spots is more modern sounding. Was that what you were going for on this release?

Miljenko Matijevic: Absolutely. That was the main focus on this album. We wanted all the magic and fun of the old days, but wanted it current. We can play the festivals with the old artists, but also gigs with the new style. So it’s past and present.

Sleaze Roxx: In terms of Frontiers Records, was this something that they approached you about doing? And what were they looking for in terms of sound? I had spoken to other artists where Frontiers has wanted them to recreate the sound of the ’80s. Was this the same for you?

Miljenko Matijevic: Nope. Doesn’t work that way with me. They gave me creative control. I guess for my pleasure. That’s the honest truth. I didn’t want just songs. I wanted to make a real record where you can feel the pain — connect with it.  That was the deal. No shit. I played “Lips Of Rain” for Frontiers. The first chorus. They said this is great, keep going. They gave me free reign.

Sleaze Roxx: The process of writing, recording etc., how long would you say this album took to come to fruition?

Miljenko Matijevic: A couple songs were written a while ago. I brought in some of the older songs. We started in November just doing bed tracks. I went to New York, came back after Christmas. I thought the first five songs were slamming. Then I listened to some older stuff and thought it was not working. So I bagged four songs. I had a lot to choose from. You know the solo stuff is different from the SteelHeart stuff. I wanted to keep the integrity of SteelHeart. So I wrote four new songs. It was pure insanity. Fifteen to eighteen hours a day working on this album. I’m 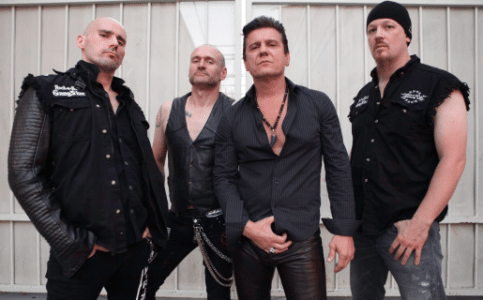 glad I did it. It works together throughout. It’s cohesive. It has an element of the past, but flows nicely. So I brought the album to Frontiers exactly in April. It was seven, eight months of solid focus. No bullshit. Working every single day. I produced the album so I would write the songs, teach the parts to the band. When it came time to sing, I did my vocals in two weeks. We were on the deadline of having the album in by April. We did “Lips Of Rain” originally in New York. I was visiting my girl in Woodstock. I went up to her bedroom while she was not there. It was pink and cool. I set up my mike and portable recording studio. I sang it in there. It was four, five verses. I came back with the vocal. The energy was too good to redo it. Why fix if it’s not broke? You learn to keep its purest form. We got it down.

Sleaze Roxx: The first track “Stream Line Savings” has a huge sound with a very Zeppelin like sounding vocal. Lyrically, what was your approach on this song?

Miljenko Matijevic: Demonist, love, sexuality. I wanted this as the first video, but we thought we’d conserve it for the next video. I mean read the lyrics. I’ve put ’em up on the website. People were surprised by the first video. This song really brings back that energy.

Sleaze Roxx: On “My Dirty Girl”, I find there is some very interesting production techniques that really add nice dynamics throughout. As the producer, did the song turn out as you envisioned it? There is a lot going on. Was this a challenge getting the sound that was achieved? 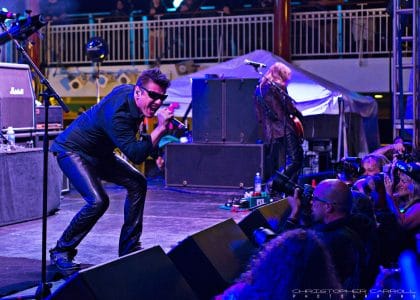 Miljenko Matijevic: Absolutely. It came out how I envisioned it. I did the demos with guitar and vocals. And I made sure they were not perfect. I purposely didn’t fix them. I wanted to stay to demo form. This will be the third video. We just shot a concert live in Korea. Then we’ll use some of the Tokyo red light district. We also just shot on Monday to Thursday for the first video. We created this whole symphony in the Utah salt flats with a Steinham grand piano. We brought in string players. One scene is the piano and me.

Sleaze Roxx: I love your vocal on “My Word”. It really shows your vast vocal range. Guitar wise, it has a sort of Sabbath feel to it. What can you tell me about this particular song?

Miljenko Matijevic: Glad you picked up on it. When I first did it, I thought holy shit. It’s heavy, nasty. It’s intense lyrically. I write about my personal experiences and this was one of those moments. Songs about love, anger and pain always live through. This one is kind of like ‘fuck you.’

Sleaze Roxx: “You Got Me Twisted” may be my favorite track. It has a “Shinedown” vibe to it. When writing this one, did you think ‘Wow! this song is so powerful and listener friendly?’

Miljenko Matijevic: Oh yeah, as soon as I heard it, I knew where it was going. It seems like there’s not much going on, but in reality, it’s not that simple. It took some time to make it work. That song was five minutes long. Who wants to listen to that? I worked it down and took out some of the song. I decided that every song can’t be more than four minutes. Literally every song, I came in with scissors. How do we do that? I put time and energy into it. 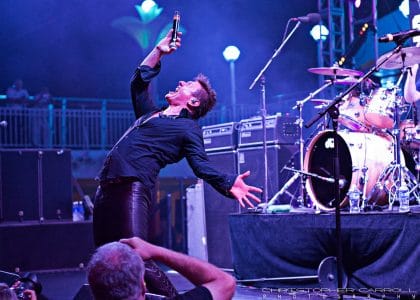 Sleaze Roxx: I think a song like this really should be on the radio.

Miljenko Matijevic: That comes down to the majors. They have the money. It takes some real money. We need to bring it back. When it comes down to the DJ, they don’t have a say — ‘Hey, I’m just the DJ.’ There was a DJ that played a song out in Salt Lake City that became a hit. It spread through like wildfire. We need more of that.

Sleaze Roxx: So what is the plan for supporting this album? I know you’re out doing the odd festival. Is that kind of where SteelHeart is at these days, like a lot of other bands.

Miljenko Matijevic: Play as much as possible. Play dates that makes sense. Bigger crowds. Promoters see that and we get more gigs. See what life brings.

Sleaze Roxx: Well thank you very much. I wish you all the best on the release of the new album.

Miljenko Matijevic: Thank you very much.

SteelHeart‘s “You Got Me Twisted” video:

Steelheart – “You Got Me Twisted” (Official Music Video)

SteelHeart‘s “Got Me Runnin” song:

Steelheart – “Got Me Runnin'” (Official Audio)