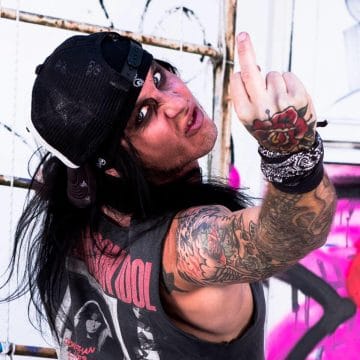 NYGAARD AND DRUMMER ROBIN NILSSON. ABOUT ONE MONTH AGO, THE CRUEL INTENTIONS RELEASED THEIR DEBUT ALBUM ‘NO SIGN OF RELIEF‘ WHICH HAS BEEN TOUTED AS THE SLEAZE ALBUM OF THE YEAR. SLEAZE ROXX CAUGHT UP WITH DEVINE TO FIND OUT WHAT HE’S BEEN UP TO SINCE VAINS OF JENNA AND OF COURSE ALL ABOUT THE CRUEL INTENTIONS!

Sleaze Roxx: First off, congratulations! ‘No Sign of Relief’ is a killer album and was worth the wait! The band took a long time releasing its debut album. Why did you finally decide to release the album now?

Lizzy DeVine: Thank you so much! It feels great to finally have an album out. I was actually against releasing an album for several years. I thought releasing a single every six months was more exciting for people. But I guess I was wrong. People really wanted an album so once Indie Recordings decided to sign us, I was forced to give in and we wrote, recorded and now finally released ‘No Sign of Relief’. And I think it turned out pretty damn good.

Sleaze Roxx: You released a bunch of videos prior to the release of your debut album. I must say that I was surprised at the amount of videos that you released beforehand. Do you think that has helped the launch of the debut album or hurt it in that people have already heard half the songs and in some cases, for a number of years?

Lizzy DeVine: We’re not really alone in doing it that way. Most bands do that. It’s a way to start a buzz going and getting people excited until the album drops. Once the album is out, there’s not much you can do.

Thought rock n roll was dead? Think again! After years of silence the time has come! Lizzy DeVine (ex-Vains of Jenna) have teamed up with fellow swede Mats W…

Sleaze Roxx: How did you guys hook up in the first place?

Lizzy DeVine: I had just moved back to Sweden after about ten years in the US. My plan was to never move back to Scandinavia again. And I had no plans on starting a new band. But I fell in love with a Swedish girl — she’s now my wife — who was on 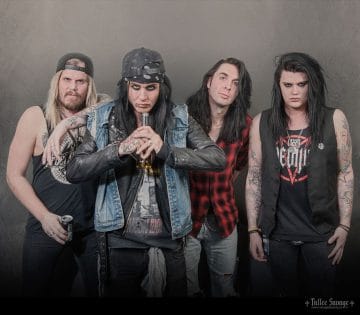 vacation in Los Angeles. Once her vacation was over, after about a week, I told her I was coming with her. It was either that or sleeping behind cars in Hollywood. So I think I made a good choice. Long story short. She had friends in Oslo and one of them was Mats. When him and I met, we clicked. We had similar taste in music and we had a passion for basically having a good time. We decided to start a band but needed a guitar player. Mats knew the right guy. He introduced me to Kristian whom Mats had played with in a previous band. And he was the perfect fit. That crazy rock n’ roller really knows how to play! We had a few different drummers in the beginning until we finally by accident saw Robin play drums in a video on Facebook. We contacted him and asked if he’d like to join the band. Luckily, he said yes. So now, we’re four guys on a mission to spread the rock n’ roll disease around the world.

Sleaze Roxx: There are three songs that you released, two of which had videos, that didn’t make it onto the album. I am thinking of “Stare At The Sun,” “White Pony” and “Accidentally Intoxicated.” Why didn’t those songs make it onto the debut album?

Lizzy DeVine: We actually didn’t want any of our old songs to be on the album! But the label wanted some of them on the debut so we re-recorded them.

Sleaze Roxx: Everywhere I look, ‘No Sign Of Relief‘ seems to be touted as the sleaze album of the year. Are you happy and/or surprised with the general reaction to your debut album?

Lizzy DeVine: I’m actually really surprised. I think the album is pretty damn good but I was never expecting it to go over that well with critics and fans. I guess it goes to show that if you just write and record stuff that you really like yourself without thinking about what people might think of it, it comes out as an honest, “true” record. We didn’t write anything to get good reviews and we didn’t try to write hit songs. We just had fun and wrote something we could be proud of and enjoy drinking a few beers to while listening.

Sleaze Roxx: What are your favorite songs on the album and why?

Lizzy DeVine: It changes daily but right now my favorite is “Chaos In A Bombshell.” It’s sleazy, a little cheesy, catchy and fun!

Sleaze Roxx: Will you be releasing more videos in support of ‘No Sign of Relief’?

Lizzy DeVine: Yeah, for sure. I think we can make another video or two.

Sleaze Roxx: Obviously, many people know you from your previous band Vains of Jenna. You announced your departure from the band back in March 2010. Why did you leave Vains Of Jenna?

Lizzy DeVine: It wasn’t fun anymore. We all had different ideas what to do with our lives, both musically and personally. The rest of the guys wanted to move back to Sweden and me and Nicki Kin wanted to write different music. I wanted to keep on doing the style we had been doing since the start — dirty rock n’ roll. But Nicki wanted to experiment with a different sound and style. And good for him, you have to follow your heart but my heart was still beating for rock n’ roll. So I left. There’s a whole lot more to the story but that’s the short version.

Vains of Jenna “Get It On”

VAINS OF JENNA – “GET IT ON”The official video for the first single from the new album “THE ART OF TELLING LIES”Label: RLS/Raw Noise RecordsProducer: Brent W… 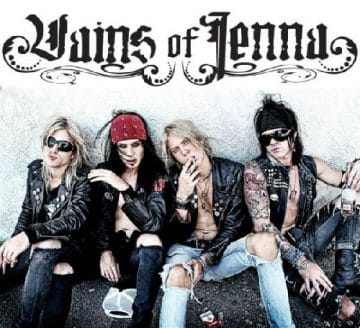 Lizzy DeVine: I was sick of the whole band thing. It wasn’t fun anymore. I had been in the band for five years, living and breathing Vains of Jenna. And quitting that “cold turkey” so to speak wasn’t good for the mind. I wasn’t really happy for while. I moved from LA to Nashville. Started working at Gibson and was building guitars for a living. I was married at the time but the marriage fell apart and I moved in with friends in Phoenix, Arizona. Once there, me and my good friend Erik Tyler started writing music together and that lit the spark that would eventually start my rock n’ roll fire again. Like I said earlier, once I moved back to LA, I met a Swedish girl. I took my backpack and my guitar to Sweden. But I forgot to mention that after a few months back in Sweden and a few months prior to meeting Mats, I got an email from a guy in Brazil. His name was Chris Young. He wanted me to come to Brazil to do a couple of shows as a solo artist. I said “yes” and flew over! Chris had the back up band and we did the shows. That really showed me that I love performing and that really helped to get my rock n’ roll train rolling again. So I’m forever grateful to Chris, Junior, Dio and Lance for rocking out with me over there.

Sleaze Roxx: Vains Of Jenna’s first release after you left was the EP ‘We Can Never Die’ which featured new recordings of some of the songs that you previously recorded with the band except with new singer Jesse Forte. Were you upset that the band was re-recording some of “your” songs with the new singer?

Lizzy DeVine: At first, I was. Yes! But they wanted to go on so I can’t blame them.

Sleaze Roxx: Less than two years after your departure from Vains Of Jenna, the group broke up. What are your thoughts in that regard? 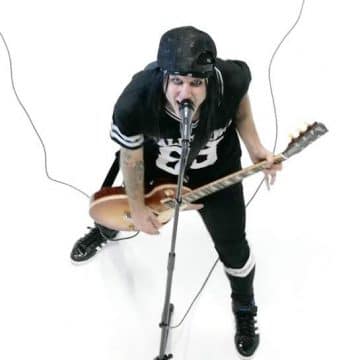 Lizzy DeVine: I wasn’t surprised. If you change that much within a band and such a short time, things will never end well. They had a new singer and they adopted a cleaner, far from dangerous, look and sound. And that wasn’t Vains of Jenna. Not for me and not for a lot of fans.

Sleaze Roxx: Vains Of Jenna had a bad boy reputation. I am thinking of one incident in particular where Vains Of Jenna band members allegedly beat up Cradle Of Filth’s tour manager in a dressing room. Is that really the case?

Lizzy DeVine: That sure happened! The guy was being an asshole.

Lizzy DeVine: It was the first day of the tour and there was only one dressing room for all three bands to share. We had played our set and Nicki and JP were going backstage to grab a few beers and chill. But this guy slammed the backstage door in their faces. Nicki and JP got pissed and kicked the door in, jumped the guy and starting beating on him. Lucky for him, the bass player for GWAR grabbed Nicki and JP by their necks and lifted them off the guy. Then all hell broke loose. We had to be sober the whole tour but we still killed it on stage.

Sleaze Roxx: Last question on Vains Of Jenna. The band was managed by Tuff frontman Stevie Rachelle whom I understand was instrumental in getting the group on a tour with Ratt and Poison. What was it like working with Stevie? 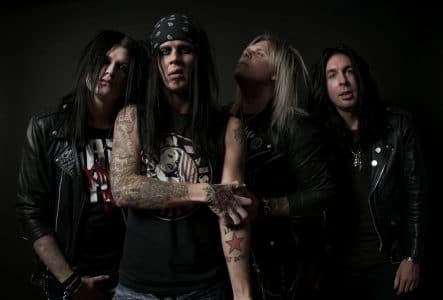 Lizzy DeVine: I love Stevie! Still talk to him now and then. He’s the main reason we had a career at all. He took us in, showed us the ropes and made sure things happened. He has as many friends as enemies in the music industry, which helped us out a lot.

Sleaze Roxx: Getting back to The Cruel Intentions, what are your plans for the rest of the year and 2019? Is there any chance that you’ll play some shows in North America?

Lizzy DeVine: We will go on like we’ve always done! Play a few shows here and there until something bigger comes along. We would love to do some shows in the US. Time will tell. But for now, we’re just gonna have a good time and rock n’ roll until we die.