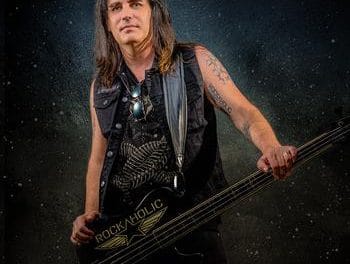 AS I THINK BACK ON WARRANT, I RECOLLECT THE FIRST TIME I SAW THE BAND IN METAL EDGE MAGAZINE. IT WAS 1988. IT WAS BEFORE THEIR DEBUT ALBUM ‘DIRTY ROTTEN FILTHY STINKING RICH’ HAD EVEN HIT THE SHELVES. I REMEMBER THE PHOTO THAT ACCOMPANIED THE ARTICLE LIKE IT WAS YESTERDAY. IT WAS A PAGE PHOTO THAT SAID WARRANT IN WHITE ON THE BOTTOM IN BIG LETTERS WITH A RED BACKGROUND. THE BAND MEMBERS WERE ALL SITTING ON THE FLOOR. I REMEMBER SEEING JOEY ALLEN’S FELIX THE CAT GUITAR FOR THE VERY FIRST TIME. I WAS MESMERIZED. WHEN IS THIS COMING OUT, I THOUGHT TO MYSELF? I JUST KNEW BY LOOKING AT THESE GUYS THEY ARE GONNA BE HUGE. 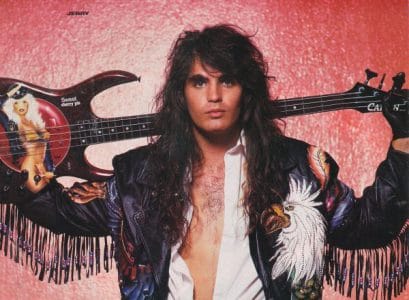 I CAN ALSO REMEMBER THE ARTICLE MENTIONING THE SONG “IT’S NOT THE SIZE THAT MATTERS.” FOR SOME REASON THAT TITLE STOOD OUT IN MY MIND. WHEN THE ALBUM FINALLY ARRIVED, TO MY DISMAY, THAT SONG DID NOT APPEAR ON THE ALBUM. GO FIGURE.

SO LET’S FAST FORWARD, TO A MUCH OLDER WISER ME. OR SO I THOUGHT. I THINK I AM A PRETTY CONFIDENT PERSON, BUT FOR SOME REASON THE THOUGHT OF INTERVIEWING A MAN I HAD GROWN UP LISTENING TO MADE ME SOMEWHAT NERVOUS. WHY WAS THAT? I HAVE DONE INTERVIEWS. I HAVE MET MANY MUSICIANS THROUGHOUT THE YEARS. SOME OF THEM I WOULD EVEN CALL FRIENDS. SO WHY WAS THIS ANY DIFFERENT? WELL BECAUSE IT WAS JERRY DIXON FROM THE BAND WARRANT. SOMETIMES, YOU BUILD THINGS UP IN YOUR HEAD. YOU THINK, WHAT IF I SAY THE WRONG THING?

I KNEW WHAT I HAD TO DO. I WOULD NOT SUCCUMB TO MY OWN INSECURITIES. AND HERE IT IS… JERRY DIXON WAS AMAZING AS WE DISCUSSED THE BRAND NEW WARRANT ALBUM ‘LOUDER HARDER FASTER’ THAT DROPS ON MAY 12, 2017. THE TIME WE SPENT TALKING FLEW BY LIKE IT WAS A QUICK SECOND. IT WAS A PLEASURE AND I AM VERY HONORED TO HAVE GOTTEN TO SHARE A FEW MINUTES WITH A MUSICIAN I TRULY ADMIRE AND RESPECT. 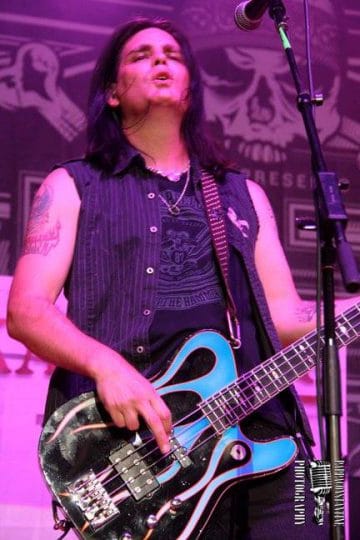 Sleaze Roxx: Hey Jerry, how are you man?

Jerry Dixon: Actually we did three. We did Portland, Maine; Hampton Beach, New Hampshire; and, the M3 [Rock] Festival in Baltimore [Maryland].

Sleaze Roxx: M3, how was that?

Sleaze Roxx: Let’s talk about the new album, ‘Louder Harder Faster.’ On the past two records you had a lot of input into the songwriting. Was it the same this time around?

Jerry Dixon: Yes, primarily it was Robert [Mason] and I. Erik [Turner] wrote “Only Broken Heart.” We wrote a really fast one called “Stop The World” that will be available on the Japanese release. It was a little too heavy for the US.

Sleaze Roxx: Oh, that’s disappointing, I’ll have to go out and get that. I’m that guy that wants all that stuff.

Jerry Dixon: I know, just one of those things [laughs].

Sleaze Roxx: What was the objective going into the album? It is called ‘Louder Harder Faster.’ There are far less ballads on this album than ‘Rockaholic.’ Did Warrant just want to put out a straight ahead rock record?

Jerry Dixon: We just wanted to write really fast rocking songs. I let Robert work on the vocal melodies while I focused on the music. Letting the music talk. We could go out and make a more ’80s rock record like ‘Cherry Pie’ but we didn’t want too. We wanted it to be a “Muso” record. More musical.

Sleaze Roxx: Aw man, there is some really great depth as the album goes on. Different from previous work. “New Rebellion” has a really Mr. Big like thing going on with the guitars.

Jerry Dixon: Yeah, it turned out great. It shows that we really can play [laughs]… 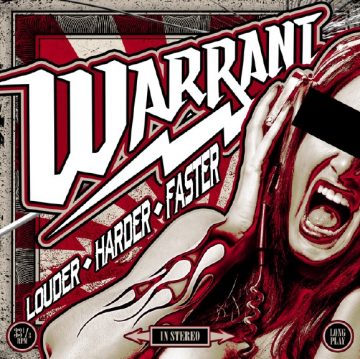 Sleaze Roxx: How was it that you came to work with Dokken/Foreigner bassist Jeff Pilson on this album?

Jerry Dixon: Jeff did the Dio tribute record. We loved the sound of it. We then got in touch with Serafino at Frontiers and mentioned we were interested in recording with him. Frontiers then said they could hook us up.

Sleaze Roxx: Can you elaborate on the recording of the album a bit? Did he push you guys?

Jerry Dixon: Jeff did the job of a good producer. He did what he had to do, like trim the fat. Just polish things. Focus on the choruses. It was awesome, Jeff had all this vintage gear. A 58 P Bass. Pre 1970. Really super vintage gear. We walked in and it was like wow. It was totally unexpected. Jeff’s also a musician, so it was nice to work with someone who gets it.

Sleaze Roxx: Was it recorded old school then?

Jerry Dixon: Yes for sure.

Sleaze Roxx: Robert must have known Jeff from playing with him on the T&N project?

Jerry Dixon: We actually all knew Jeff from years back.

Sleaze Roxx: Can I ask why “I’ll Just Stay Here and Drink” was not included on ‘Louder Harder Faster’? Did Jeff produce that as well?

Jerry Dixon: Yeah, we did it with Jeff. Pat Regan mixed it. It was for the rodeo association. We’ve done nine shows for them so far this year. We originally put it out as a stand alone track. It will actually be a bonus track on the hard copy of the album.

Sleaze Roxx: Whoops, my bad. Did not realize that. My copy was a download. But I will be buying it when it comes out on disc.

Sleaze Roxx: The song that I have really gravitated towards on this album is “Music Man.” Is this a true story or truly fictional?

Jerry Dixon: It’s a trip. We had recorded it, but we weren’t really happy with it. We actually did it two years ago. The recording was finished. We decided to redo it. I called Robert, said “Let’s scrap it and re-record.” So we restarted. We bumped it up about 20 beats.

Sleaze Roxx: I love how Robert did the intro vocal, where he’s talking to his Mom. You know with that respectful kid thing?

Jerry Dixon: Yeah, when we heard it, we thought it was great.

Sleaze Roxx: I absolutely love “Only Broken Heart.” Robert’s vocals are very Thin Lizzy. Was this something that the band did on purpose? Kind of a dedication to your influences?

Jerry Dixon: It was by accident actually. Erik and I had this vocal finished called “80’s Ladies.” Robert hated it. He just couldn’t see himself singing it. So he could not see himself backing it. On the last day of rehearsal, he came up with a whole new part. We were like what? What’s wrong with “80’s Ladies”? Guys, I just can’t sing that. So he started humming the melody in pre-production. We recorded it. We were cool with it as long as it gets on there. It did sound like Thin Lizzy, but we all grew up with Thin Lizzy, so it was cool.

Sleaze Roxx: So in the end you were happy with how it turned out? 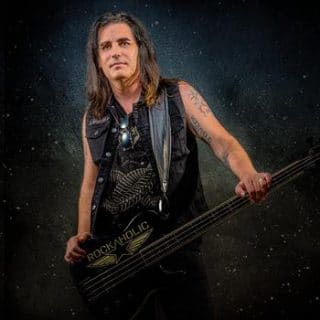 Sleaze Roxx: The song “Perfect” has a really Foreigner vibe to it — especially the intro. Was it in part to working with Jeff Pilson?

Sleaze Roxx: I believe the intro is what is done in the chorus. Really cool open part.

Jerry Dixon: Yes it is and yes the intro is in the chorus.

Sleaze Roxx: I find that the chemistry between the four of you, that being the four original Warrant members. It’s undeniable. I think people don’t realize that sometimes. They only focus on the singer, but to me it’s the whole package. I listen to Steven’s harmonies, they add so much to the music. There is a great cohesiveness. Years back when you four starting playing together again, was it instantaneous that this is how the band is meant to be?

Jerry Dixon: We didn’t realize it until we got back together. Fuck, I don’t know what it is. The way we’re just magical together. When we first rehearsed together we went in to “Down Boys.” It sounded great. When we had other line-ups, I just always thought it didn’t sound right.

Sleaze Roxx: I get very frustrated when I see people posting about not wanting to hear Warrant without Jani Lane in the band. How do you feel about that?

Jerry Dixon: Generally those are the people that don’t come to the shows. Those that do, understand the situation and know what’s going on. They get what we’re doing.