IT’S ALWAYS SAD TO HAVE A SLEAZE ROCK GROUP DISBAND BUT VERY SWEET TO HAVE THEM COME BACK. AFTER PUTTING THE PEDAL TO THE METAL FOR FIVE YEARS FROM 2009 TO 2013 AND RELEASING TWO EPS ‘WILDSTREET’ (2009) AND ‘WILDSTREET II . . . FASTER . . . LOUDER’ (2011), NEW YORK SLEAZE ROCKERS WILDSTREET DISBANDED BEFORE THE GROUP’S FRONTMAN ERIC JAYK REUNITED WITH GUITARIST JIMMIE

MARLOWE AND ADDED THREE NEW MEMBERS FOR THE BAND’S ‘RESURRECTION’ SHOW ON OCTOBER 22, 2016. SLEAZE ROXX CAUGHT UP WITH JAYK TO FIND OUT WHAT HAPPENED TO WILDSTREET AND THE BAND’S RESURRECTION AND NEXT CHAPTER.

Eric Jayk: Hey, great question! Being in a band is hard work and we had the pedal to the floor from 2009 to 2013. I felt like I needed to pursue other interests musically, get my life and head together, and find a renewed love for Wildstreet and rock ‘n roll… My wife Kerija Kaleja, who is Astra The 22’s vocalist, and our friends helped me find renewed passion, energy and excitement for Wildstreet. Over the past three years, I began to understand our true fan reach, which is much greater than I had ever thought. Still, I won’t be satisfied until that is multiplied exponentially. You can’t be the biggest band in the world if you’re sitting at home watching TV or in my case teaching people to sing [laughs].

Sleaze Roxx: In December 2013, you switched gears forming the group Astra The 22s, which I would qualify as more of a pop group. Why the major shift in direction? 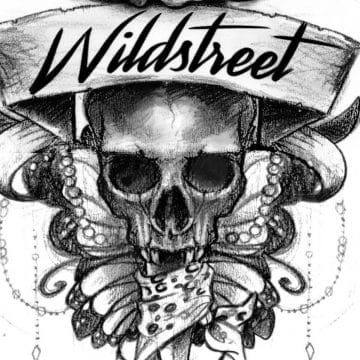 Eric Jayk: Astra The 22’s is hardly a pop band. We may not be hard rock or sleaze metal, but hooks and good songs don’t make you pop. We have a new EP ‘Paris Love’ which will be released by the month of May [2017] and a single that will be released in March [2017]. Those will change people’s perceptions/misconceptions of the band. I think Wildstreet fans will be stoked on the song “Fake It.” It embodies the spirit of the album ‘Wildstreet’ [released in 2009] and “Wanna Get it On.” Stadium size hooks, massive drums and crunchy guitars!

Sleaze Roxx: Do you feel that the music industry has changed in any way during the couple of years that Wildstreet were on the sidelines, and if so, in which way?

Sleaze Roxx: [Laughs] Why do you call yourself the Peter Pan of sleaze rock?

Eric Jayk: To be a legend, one must grow up. I will never get old, and never die.

Sleaze Roxx: It appears that you have some new members in Wildstreet. How did you find your new bandmates?

Eric Jayk: Wildstreet’s line-up consists of myself on lead vocals and guitar, Jimmie Marlowe on guitar, Jonny D on bass, Dominick Martes on guitar and Lock Driver on drums. All four of the guys provide background vocals. I first connected with Jimmie back in 2005 when he answered my Craigslist ‘guitarist wanted’ post. After annoying him five or six times for a current photo, he came for an audition. He got the gig immediately and we have been best friends ever since. Soon we parted ways with the band that he had just joined and the two of us decided to write all new music. We completed the first four songs of Wildstreet’s self-titled debut EP and we were playing for gigs for a year or so with a hired rhythm section. Then after finishing writing and recording the remaining half of the EP, we sought out permanent band members. In 2009, we signed our first “record deal” with Retrospect Records and released Wildstreet in 2009 and went on tour for ten weeks coast-to-coast and made our Rocklahoma debut. That was our beginning. Jimmie and I lived the party, but songwriting always came first. We managed to write badass music and destroy every photo studio!

Jonny D was the first one I asked to be part of Wildstreet circa 2017 after Jimmie! Jonny D is the singer and visionary of The Nasty Things and played bass in Acey Slade’s band. I produce and play bass in his band. The rest of the band consists of Mach22 drummer Damian Montecarlo and guitarist Jaster Leon who plays The Party Death and Rachel Lorin. I met our drummer Lock through my friend Felix. Felix and I started Rave La Kill in 2013. Lock plays in Felix’s band. He is a great drummer, a good dude 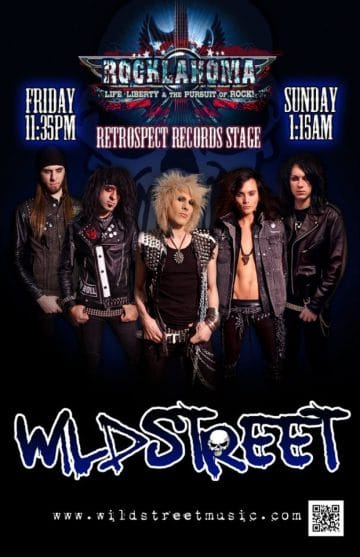 and is a singing drummer which rocks! We have just added guitarist Dominick Martes to the band… Again, he responded to my add on Craigslist, which I posted anonymously. He is a star!

Sleaze Roxx: Wildstreet are playing Rocklahoma later this year. How did you hook up with that festival for this year?

Eric Jayk: Wildstreet headlined the retrospect stage every year from 2009 to 2013. After the resurrection show [on October 22, 2016], it seemed the next logical step. When we were approached by the powers that be, I knew I had to make it happen for us.

Sleaze Roxx: Will we be seeing some new music from Wildstreet in the near future?

Eric Jayk: My plans for Wildstreet are to release a new single and video, play Rocklahoma, record a new EP or album, tour Europe. I have wanted to do that with Wildstreet for the past four years.

Sleaze Roxx: What are your top three all-time favourite albums?

Eric Jayk: I’ll make it top 5 five and won’t explain why [laughs]. My picks are David Bowie’s ‘The Rise And Fall Of Ziggy Stardust And The Spiders From Mars’, Def Leppard’s ‘High ‘N’ Dry’, The Cult’s ‘Sonic Temple’, Prince’s Purple Rain and Mötley Crüe’s ‘Shout At The Devil.’ Some other bands I like are 69 Eyes, Vamps, Reckless Love, The Last Vegas, Airbourne, AC/DC, Guns N’ Roses, Aerosmith, Hanoi Rocks, Jimi Hendrix and so many more.

Wildstreet‘s “Easy Does It” video: