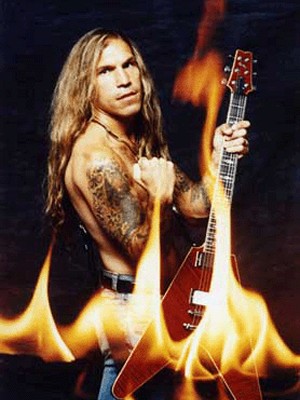 Sleaze Roxx recently caught up with guitarist Jack Frost who has worked with the likes of Savatage, Metalium, The Bronx Casket Company with Overkill’s D.D. Verni, his own band Seven Witches as well as his solo efforts. His band Seven Witches have a new album out entitled ‘Call Upon The Wicked’ where we find Jack Frost reuniting with singer James Rivera (Malice, Helstar) once again to take care of some unfinished business. The album was released on June 28th in North America on Frost Byte Records, so pick up a copy today. Enjoy the interview and give us your feedback.

Sleaze Roxx: Seven Witches is back and you have a new album out called ‘Call Upon The Wicked’. What can you tell the readers about it?

Jack Frost: The bottom line is that this album is everything we’ve wanted to be and then some. We really wanted to go back to the old school sound. We got a lot of flak on our last two albums by the fans because they sounded a bit too modern. We took three years to write and we wanted to look back at the album and say, “We really put our heart and soul into the album.” On past albums we had deadlines — on this album we wanted to dissect everything from songwriting to production. We wanted to live with these songs for months at a time, that’s the big difference on this record.

Sleaze Roxx: You have knocked out a couple of critically acclaimed albums in ‘Xiled To Infinity And One’ and ‘Passage To The Other Side’, which were released back to back. The bar was raised on those albums — that may or may not be pressure for you because of the high regard for those albums amongst fans.

Jack Frost: Thank you very much. It’s a labor of love with this band. I love music and I love to play. I agree that ‘Passage’ and ‘Xiled’ are timeless, I think ‘Year Of The Witch’ was a great record that was overlooked — unfortunately Sanctuary Records went bankrupt because we could have done so much more. We were fortunate enough to have done the Overkill tour and we did some touring on our own across the United States. I believe had that album been released a year earlier we’d be in the same boat as a band like Iced Earth today. Times were hard, the economy hit bottom, and unfortunately for us Sanctuary closed the doors. So here we are back in the saddle again, you know.

Sleaze Roxx: Can you clarify the reason why singer James Rivera left Seven Witches after ‘Year Of The Witch’?

Jack Frost: We went our separate ways. He got separate gigs — he was doing Killing Machine and he reunited with Helstar. At that same time I was busy with other things. Let me be honest with you, the label going under really took its toll on us. There wasn’t any bad blood between us or bad words said. We had a great European tour behind that album and then the label started having trouble. Then they closed their doors. That was a blow to both of us. 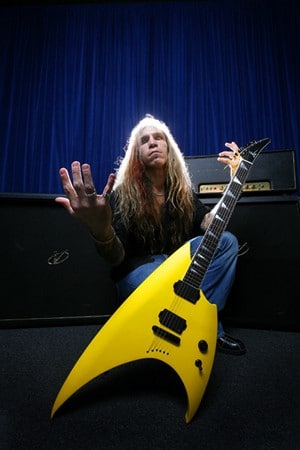 Jack Frost: I’m pretty fortunate. Even on my solo records, or the bands that I’ve been a member of, I’ve always had the luxury of having some of the best singers in the industry. I think these guys like my personality when it comes to songwriting. I’ve never been the dictator to the singers — they become aware that I give them the freedom to be a singer. I don’t say to them, “You have to sing this like this or that.” I love singers, I’ve been very fortunate to have worked with some of the greats. The albums I did with Alan were great. I know that fans were bummed out because they sounded very modern and in retrospect we should have called the band something else. Thinking back now, had they been under something else other than Seven Witches they would have fared better. I’ve worked with Joey Belladonna and Lizzy Borden and they are great singers, as is Bobby Lucas who was in Seven Witches for a short time.

Sleaze Roxx: Give me the story behind you and James Rivera reuniting?

Jack Frost: I was on tour with Joey Belladonna and we played in Houston, Texas. James came out to the show with his girlfriend, we went out for coffee and we talked about how much we missed each other. We both mentioned that we should do something together again and we both agreed to give it another try. We did some shows with Alcatrazz, some shows in Texas, and then we headed to California and did some shows there. I said to James, “Come on dude we have some unfinished business, let do a record.” So it wasn’t like managers or outside people were involved, it was very easy. It was just like two brothers getting back together and playing music again.

Sleaze Roxx: You’re new album ‘Call Upon The Wicked’, as you mentioned earlier, goes back to your roots. I think it’s also the sound that your fans have come to know and expect from Seven Witches. Was the traditional metal sound what you envisioned for this album initially or did it simply turn out that way?

Jack Frost: To be completely honest it just happened, we didn’t have a direction. I just started writing these riffs, Michael Lepond (bassist) brought in some ideas and things just stated to fall into place. We didn’t say, ‘Okay we have this song and this is going to sound like Iron Maiden or this one is going to sound like Judas Priest’. We didn’t say that we should go back to the first Seven Witches album and rekindle that. I know some bands try to go back to their earlier work and if it’s forced it just doesn’t work. An example of just doing what you do and putting together a great record is Accept’s ‘Blood Of The Nations’. That album is a monster! Our attitude going into this album was ‘let’s just go back to playing rock ‘n’ roll’ — that’s all it was.

Sleaze Roxx: > If you don’t mind maybe you can walk us through some of the highlights from ‘Call Upon The Wicked’, starting with “End Of Days”. 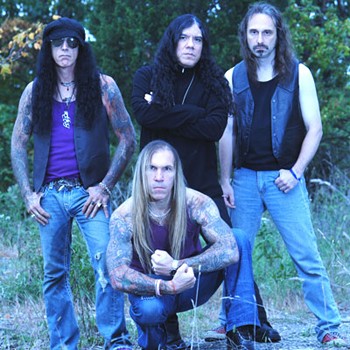 Jack Frost: Wow! That’s funny because you and everybody else I’ve spoken to totally dig that song. It’s interesting because the guys in the band fought me tooth and nail about that song. They said, “Oh, you’re bringing in a girl singer? Oh, that’s not gonna sound cool.” I said to them, “You know what? This has been my baby for 12 years I want to do this!” At the end of the day everyone was psyched about that song. We wanted to do something special and I think we did that. We wanted to do an epic piece that was along the lines of “Rime Of The Ancient Mariner”. “End Of Days” has so many twists and turns and someone said that my playing on that sounds like Uli Jon Roth — I just about fell off the chair when I heard that. I said, “Thank you so much for the compliment but I’m far from Uli Jon Roth.” I wanted to take what the song “Passage To The Other Side” had and add a million blocks to it — “Passage” is my “Stairway To Heaven”.

Sleaze Roxx: It’s funny you should call “End Of Days” epic because that’s what I called the song in a review I wrote. The female vocal really compliments James’ vocals and vice versa.

Jack Frost: Thank you very much. I can’t tell you how many times I rewrote that song. I rewrote it several times and never thought that it was good enough. That song was a pain in my ass. If you’re a baseball pitcher and you’re facing a batter and he always hits a home run off of you — that’s what “End Of Days” was to me.

Sleaze Roxx: Another track that I really enjoy is “Call Upon The Wicked.”

Jack Frost: It’s funny you should mention that song because that has a Deep Purple/Rainbow type of vibe to it. That song is plain and simple a rock ‘n’ roll song that was taken to another level by James’ vocal. If you take a listen again you can hear the Ritchie Blackmore influence all over that. I’m so proud of that song because I’m huge fan of Ritchie’s work with Rainbow and I went for this Ronnie James Dio era Rainbow sound.

Sleaze Roxx: I also liked what you did on the track “Ragnarock”. I don’t know how to describe that opening riff on that one but it’s reminiscent of something Joe Satriani would do. The chorus on that particular track has to be one of the best you’ve ever done.

Jack Frost: Cool, thank you so much. Mike Lepond brought that one to the table. Most people might not know this, but he’s a great songwriter — he doesn’t get a chance to show that much in Symphony X because it’s Michael Romeo and Russell Allen’s band. In the press people have gotten this idea that I’m a tyrant or that it’s the Jack Frost show — it’s simply not so. I encourage the guys to bring what songs they have to the table and Mike brought in “Ragnarock.” I love that song, it’s got that great ’80s hook to it.

You picked some really good songs there. It’s not the typical interview where you picked “Fields Of Fire” or “Lilith.” The majority of the interviewers will go for the songs that have videos or the songs that they think we’ll do videos for, you know? You took the time to listen and that really makes me happy — thank you.