“Every song on that album [‘Once Bitten Acoustic Bytes’] sounds phenomenal. I think we did a great job reworking songs like, “Livin’ On The Edge,” “Never Change Heart,” and “Fast Road” into acoustic renditions. I didn’t know how we would do that. I couldn’t see it at first. We just needed to strip them down to the ‘nuts and bolts’ and I think they really came out great,” says an enthusiastic Jack Russell when asked about he and his band’s latest effort. The new album is an acoustic reworking of the ‘Once Bitten’ album. It was cut by Jack’s 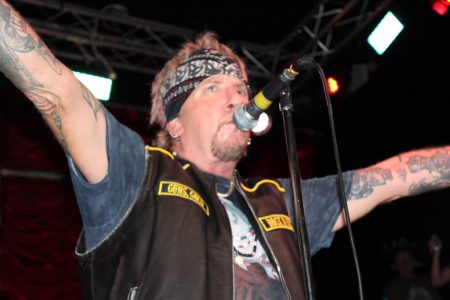 current band Jack Russell’s Great White. The album is titled ‘Once Bitten Acoustic Bytes.’ It sounds incredible and was issued by Deadline/Cleopatra on May 1st. Jack took some time to speak with Sleaze Roxx about the new album and the possibility of future acoustic reworkings of classic Great White albums. Also please check out our 2017 Sleaze Roxx interview which details his discography with Great White.

Sleaze Roxx: I love ‘[Once Bitten] Acoustic Bytes.’ I was pleasantly surprised at how well that was executed. How long was this in the making? You’ve been talking about this for a while.

Jack Russell: Thank you. It took us a while to get this done, because we have been staying busy with touring, so it took a while to get this together. It took a bit longer mainly because of me. We’d get back from a series of weekend shows and I’d want to rest my voice before we’d go out again the next week. I think about it now and think “Wow, that took a while.” It took what it took. I just wanted the end result to be as good as we could deliver. I think it’s a really good album. The renditions of the songs are great. They came out even better than I thought they would. I’m so proud of the band. They played fantastic on the album and I’m pleased with my vocals on the album. It exceeded my expectations.

Sleaze Roxx: I remember seeing Jack Russell’s Great White at the NAMM 2012 show. You were performing on the main floor and you blasted through five-six songs. It was jaw dropping at how great your voice still sounded after how much you had battled through. That was also one of the first few shows with the first incarnation of the band. 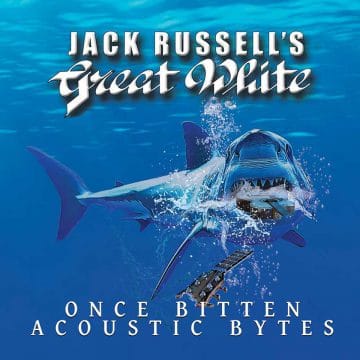 Jack Russell: Thank you. That was the first incarnation of the band. That was a great band. We’ve just gotten better. I think that might have been the second performance that we did. I think we did something else leading up to that to break in the band.

Sleaze Roxx: On ‘Once Bitten Acoustic Bytes’, you tackled one of the classic Great White albums, it’s within your right having written some of the material and you being ‘the voice’ of that material. You gave ‘Once Bitten’ the acoustic treatment, so it put a new spin on the songs, but did you have any second thoughts going into that because when bands recut classic material, more often than not, it doesn’t match up and that turns off the fanbase.

Jack Russell: It was inspired by the [MTV] ‘Unplugged’ sessions and how I’d really like to hear this stuff done acoustically. Then that grew to doing an album acoustically from start to finish. I asked myself “I wonder what that would sound like?” Then I looked at ‘Once Bitten’ and I wondered if we could make that work? I said, “I said screw it! Let’s move full speed ahead!” Like you said, we took a risk. It could turn some people off, but so far we’ve heard nothing but positive things from the fans and people like yourself who have reviewed the album. I’m just so pleased with the reaction, the end result, but I have to say that I don’t make albums for anyone else anymore. I make them for myself. I have to be happy with what I write and I record. If I’m happy creatively with the record, that’s great. If people don’t like it, then at least I have a record that I liked.

Sleaze Roxx: Being that the response has been positive for ‘Once Bitten Acoustic Bytes’, will there be another reworking of another classic Great White album in the not so distant future?

Sleaze Roxx: I noted in the review that I would love to see you do ‘…Twice Shy’ in similar fashion. The bonus cut on ‘Acoustic Bytes’ is Led Zeppelin’s “Babe [I’m Gonna Leave You],” which has huge significance, not only because you cut that with the Zeppelin set album you recorded years ago, but it was also featured on the Great White MTV Unplugged show. I want to hear “Wasted Rock Ranger” as the bonus cut on the ‘Acoustic Bytes’ version of ‘…Twice Shy.’

Jack Russell: Yeah, I think we should put that on there as the bonus track! That would work for sure.

Sleaze Roxx: The roots of these Great White songs on these classic records that we’ve been talking about, including ‘Once Bitten,’ did they all have acoustic roots in their early workings?

Jack Russell: Well, that’s how we would start. I personally have always thought, if a song sounds good with just an acoustic guitar and vocal, then it could be a great song. That is, depending on what you do with it, you can take that song and make it a hit or you can ruin it. If it starts sounding good with just a guitar and vocal, then you have a great shot. I like to let my hands off the wheel and allow the song to express itself and evolve into what it will become. I’ve learned that over time, you have to know when to let go of the wheel.

Sleaze Roxx: What’s the status of original Jack Russell’s Great White music? Will we be hearing new stuff soon between these acoustic albums. 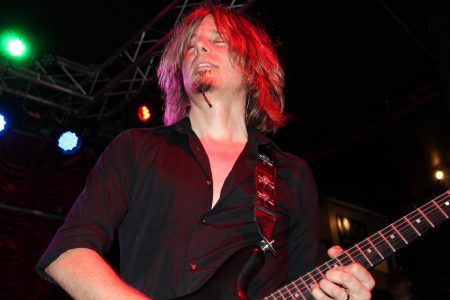 Jack Russell: Oh, absolutely! We’re currently about half way through the next album. Unfortunately with the current climate with this Coronavirus, there are some challenges. When Robby [Lochner] and I get together, we don’t even shake hands! You can’t say “Hey, he’s my bro, I can’t get sick from him.” You just don’t know and I can’t take the risk. It doesn’t take much to contract the virus and it can kill you. I don’t want to become another statistic. The album is coming along, but even with this downtime, it’s completion has had its fair share of challenges.

Sleaze Roxx: When I last spoke with you in 2017, we went through your discography and when we spoke about ‘Once Bitten’, you made mention that you had to fight to get “Save Your Love” on the album. Which is incredible because it’s such a great tune.

Jack Russell: That’s exactly right! The producer, the label and even some within the band thought that the song was ‘too wimpy.’ I felt so strongly about that song. It needed to make the record and I went as far as to say, “If this song doesn’t make it on the record then neither do I!” It made the record and went on to be one of the fan favorites [laughs].

Sleaze Roxx: So again in coming full-circle, you released “Save Your Love” as the first video clip for ‘Acoustic Bytes.’ That’s a timeless tune that sounds great in ‘electrified’ ballad form or as an acoustic song.

Jack Russell: Thank you. I say this with full humility. When we recorded that, I stood back and felt that it was such a brilliant version of that song. That performance stirred me, not just mine, everyone involved. It’s so laidback, soulful and I liked that performance even more than the original. I’m just so proud of this version. To me, that became the obvious choice to make a video for. 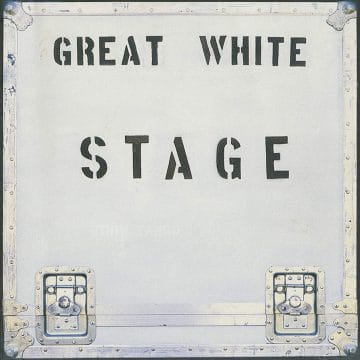 Sleaze Roxx: How do you feel about Cleopatra making ‘Stage’ available after being in print again and in its complete form?

Jack Russell: I love that record. I think it’s great. That was Alan’s [Niven] ‘baby’ when we were in contractual ‘break-up’ between management and band at the time. He was instrumental in releasing that originally and I think it’s great. I’m glad it’s available for the fans. I wholeheartedly encourage the fans to pick it up.

Jack Russell: Yeah, Alan and I are friends after having gone to war. When we parted ways, it was like a divorce. It wasn’t pleasant. It was nasty and it took a while to let the pain and hurt go away and you begin to remember the good things and you begin to heal. That’s the way it should be, it’s not always that way.