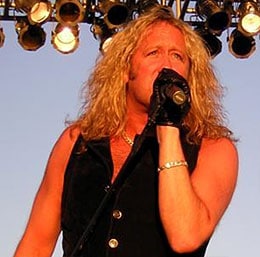 As frontman for Black ‘N Blue, Jaime St. James was part of an 80s rock movement that included multi-platinum bands such as Warrant. Today he now fronts Warrant and together they released a brand new album entitled Born Again. Currently on tour, Jaime and Warrant are taking their new music to the people as well as writing for a new album and working on a DVD.

SR: Warrant’s new album Born Again has to be one of this years most pleasant surprises, how happy are you with the way it turned out?

JSJ: I think it’s great. We are very happy with the way it came out. When we first got together in early Feb. of 2004 we talked about doing a record and we all agreed that it should sound like what we we’re doing in the 80’s, which was 70’s influenced hard rock.

SR: To me the CD is a fun stripped down rock record, is that the type of sound you were going for?

SR: What was the writing process for Born Again like?

JSJ: Jerry, Erik and myself collaborated on a lot of tunes. Jerry and I did some solo writing. After that the band got together and fine-tuned them. We wrote some songs by sending music over the computer. We all have pro tools so that works but I prefer the old way, which is, get in a room together and rock out.

SR: What are your favorite tracks from Born Again and why?

SR: How have live audiences reacted to the new material?

JSJ: It’s been great! The tunes fit the set list well and the crowd response has been surprisingly great. We only do 2 new songs a night because the crowd wants to hear the classics but the rock fans are loving it!

SR: How hard is it for a musician to step into a band and play material that they had no help in writing?

JSJ: No problem at all, in fact if they’re good they add to the song by giving it their own flair.

JSJ: Hell yes, we never stop working. We’ve got some killer tunes already. I’m not going to give away any titles yet but trust me it’s getting exiting already.

SR: What about a DVD, any plans to release something like that? 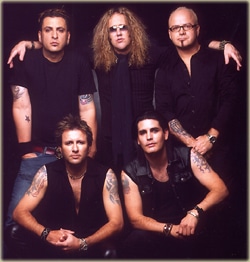 JSJ: We have put together a DVD for Born Again. All 12 songs done studio style with creative footage cut in. There is the making of the CD and extra live on the road stuff. It’s a lot of fun and should be ready soon.

SR: It seems that every 80s band that separates eventually gets back with its original members, do you think it is inevitable that Jani Lane returns someday? And if so, how does that make you feel?

JSJ: Anything is possible but I don’t see it happening at this time. I don’t worry about stuff like that. I live for today.

SR: What was it like being in Black ‘N Blue and watching bands like Warrant reach a much larger audience, and then later down the road be fronting them?

JSJ: It’s weird, I never thought I would be here but I love it. Black ‘n Blue was a great band but it just never went thorough the roof. I was always glad for other bands that went big but I’m still playing music all these years later so I must be doing something right.

SR: A new Black ‘N Blue album has been rumored for years, what is going on with it? Is it slowly becoming the newest Chinese Democracy?

JSJ: It is in limbo right now due to circumstances beyond my control. To be honest, the master tapes are locked up in storage in Oregon with Jeff Woop Warner and he is missing in action a lot of the time. I do hope to finish it some day because it’s really good. Hey Woop “are you out there?”

SR: If the record does finally get released do you think the band will reform to promote it?

JSJ: We might get together to do some shows without Tommy because he is under contract with KISS. Lets get it out first.

SR: Why did Black ‘N Blue originally disband, and what was it like playing with the guys again?

JSJ: We lost our deal and we were tired I guess. When we did get together again it was like we never broke up. The “One Night Only” CD was done with only one rehearsal.

SR: What was the story behind Freight Train Jane? Did the band end up touring to support the debut and was a second album in the works? 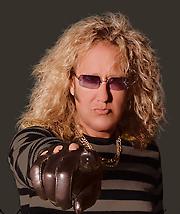 JSJ: I put that band together after BNB. The CD rocked but was only released in Japan and we did shows in LA but that was it. No second recording was ever done.

SR: How pleased were you with your solo album Americanman? Could you see yourself recording another solo album in the future?

JSJ: That disk was demos that we tried to make sound good, so in that respect I hated it. I do like the songs. I got to be kind of pop for a while so it was a nice change. You never know about another solo project. I love to write songs but right now it’s all for Warrant.

SR: You have recorded cover songs in the past, how do you choose which songs you’d like to put your own stamp on?

JSJ: It’s usually a last minute thing. I try it out and if it sucks I don’t use it. I’m not too big on cover tunes.

SR: How tiresome does it get for an artist playing the ‘hits’ live night after night? If it was me I could see myself getting sick of the songs after awhile.

JSJ: It doesn’t bother me because I know the crowd likes it. When you’re on stage it’s like a different world. It’s fun to play the old hits.

SR: What are some of your most memorable “life on the road” stories?

JSJ: All the usual stuff that we all did back in the day. Getting laid every night like a rock whore. Also getting advised from guys like Steven Tyler and Paul Stanley on our first two tours was pretty incredible.

SR: What was it like being a part of the infamous L.A. rock scene in the early 80s? What stories stand out?

JSJ: That was a great time. Hanging out at the Rainbow, the Roxy, the Whisky, and The Troub. There was a great rock band on every corner. The chicks were everywhere back then. There will never be a scene quite like that again.

SR: What bands from that era did you think would make it huge and which ones made you wonder how they ever got a deal?

JSJ: I new the Crew would be huge. I new Warrant would make it big. There was defiantly some that sucked but no comment on that.

SR: Many people blame grunge for the death of hard rock music, what is your take on what happened with 80s rock bands?

JSJ: They kind of killed themselves. Over saturation.

SR: What are you listening to nowadays and is there anything coming out that you are excited about?

SR: Any last words for your fans?

Thanks to Jaime St. James