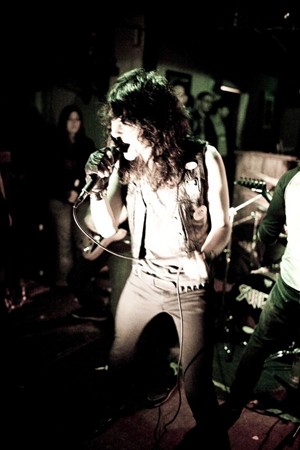 Holy Grail, featuring former members of White Wizzard, played Portland, Oregon on April 10th to a sold out crowd. They were selected as the opening act on Amon Amarth’s North American tour and played a six song set which included “Call Of Valhalla” (pleasing the Viking faithful), “Fight To Kill”, and a brilliant cover of Accept’s “Fast As A Shark.”

In addition to their opening slot on this high profile tour, there are even more reasons for Holy Grail to celebrate; they were nominated for ‘Best New Band’ at Metal Hammer’s 2010 Golden Gods Awards, and they have been added to both this year’s Wacken Open Air Festival in Germany and the Tuska Open Air Metal Festival in Finland.

I ran into the band after their set and snagged a quick interview with singer James Paul Luna who caught us up to speed on how the debut album is coming along. If you get a chance to catch Holy Grail live please do, you won’t be disappointed. These guys have captured the spirit of old school metal circa 1982 with a modern spin and they possess a charm that no true metal fan can ignore. Enjoy the brief interview.

Sleaze Roxx: You’ve only played a couple shows with Amon Amarth now, how have you guys gone over with their audience because you’re totally different bands stylistically.

James Paul Luna: Yeah, most people haven’t heard us. Their audience is a fist pumper kind of crowd, so when we get them going they really get into the music. I think by the end, as you saw tonight, they get the band… and who knows, they might buy the music.

Sleaze Roxx: How much longer are you going to out with Amon Amarth?

Sleaze Roxx: You guys have this old school vibe to your look as well as to your sound. I’m an old school metal fan from back to the early days of Iron Maiden, Venom and Diamond Head… The New Wave Of British Heavy Metal stuff. I like what I hear, it takes me back to the mid-80’s, to stuff like Armored Saint. Is this the direction you wanted to take this band after you left White Wizzard?

James Paul Luna: Definitely, we started off just seeing what direction this band went. The stuff you mentioned was the stuff we were brought up on, the classic old school metal. Our heroes are Iron Maiden, Judas Priest, Megadeth, all that kind of stuff. We evolved because we wanted to introduced new influences as well… black metal, death metal… in our new material. You didn’t hear anything from the upcoming album tonight because we are still working on it. These guys left L.A. and I was still there cutting vocals and just flew in tonight in time for the show. It’s still under wraps, we’ve got about 80% of the album done right now. We’ll finish that up when we get back home to L.A.

Sleaze Roxx: Is the new material in the same vein as the stuff of the EP?

James Paul Luna: Similar direction, but it’s more refined. That stuff was written right after White Wizzard, so that was just the three of us that left the band. We didn’t have a second guitarist or bassist at that time. We weren’t a complete band yet. The new material… it’s myself and both guitarists writing together. We came up with roughly thirty songs and it ranges from classic metal to death metal influences to everything in between. I think people will like it.

James Paul Luna: Originally we were shooting for July 2010, but now I think we are aiming for August of 2010.

Sleaze Roxx: This tour is only the beginning, I imagine you’ll be touring for most of 2010. After this tour with Amon Amarth what’s next?

James Paul Luna: We have a couple of festivals that have been confirmed. We are doing Download Festival in the U.K., and we’re doing Tuska Festival in Finland, and we’re also doing Wacken in Germany. It should be a really good experience for us and a great opportunity to get our name out there and play live.

Sleaze Roxx: What do you think about people’s comparisons between your band Holy Grail and your former band White Wizzard? 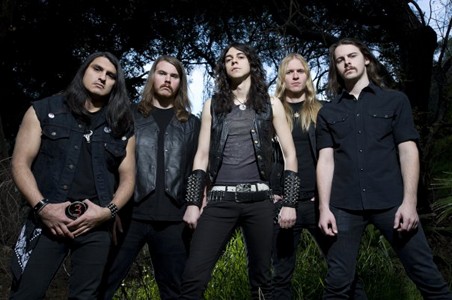 James Paul Luna: Listen, I can see why people would make comparisons. We were in that band (laughs)! Our music that we’re doing right now, and what we did on the White Wizzard EP are similar, but I think Holy Grail is thrashier. We have more technical, shredding solos on our songs. Wait until you hear the new stuff because the music will be even more technical and there is more shredding. We are moving to being a separate entity and move past the comparisons. White Wizzard is more retro, like Iron Maiden or Judas Priest; I love that, but I think this band is different. We are looking to branch out.

Sleaze Roxx: Is there any animosity toward Jon Leon and the current White Wizzard guys?

James Paul Luna: Not for me. I think this spilt might have been for the best. I really wanted to do something that encompassed all metal subgenres and Holy Grail can do that. We can stretch out musical boundaries.

Sleaze Roxx: One comment that I heard on a message board was something like, ‘instead of one good band we get two.’ Do you feel that way?

James Paul Luna: Exactly, I think it’s better for everyone in the end. I’m happy and excited about the future of this band. I can’t wait for the fans to hear the music.

Sleaze Roxx: If the opportunity arose would you consider doing a tour with White Wizzard?

James Paul Luna: You know, if there was an opportunity down the road, I wouldn’t mind it at all.

Sleaze Roxx: I see you’ve got to go, so I thank you very much for taking some time to answer a few questions. Good luck on the rest of the tour and we look forward to the new album ‘Crisis In Utopia’ around August of 2010.

James Paul Luna: You know the title of the album? Wow! Thanks for coming to the show and we’ll talk to you soon.

Thanks to Spencer Jones for taking care of us at the venue and to Carise Yatter for her assistance in setting this up. It was greatly appreciated.