AFTER RELEASING THEIR ‘METAL KNIGHTS’ EP BACK IN JANUARY OF THIS YEAR, JESSIKILL GOT THE OPPORTUNITY TO PLAY A NUMBER OF SHOWS WITH NONE OTHER THAN FORMER JUDAS PRIEST FRONTMAN TIM “RIPPER” OWENS. SHORTLY AFTER THOSE SHOWS, KEYBOARDIST RALF LLAMAS WAS REPORTEDLY FIRED FROM THE BAND FOR UNACCEPTABLE ‘ALCOHOLIC’ BEHAVIOUR. IN ADDITION, GUITARIST JOEY V WAS ALL OF A SUDDEN NO LONGER IN THE BAND. SLEAZE ROXX CAUGHT UP WITH SINGER JESSIKILL (WHO BEARS THE SAME NAME AS THE GROUP) TO FIND OUT MORE ABOUT THE TOUR WITH TIM “RIPPER” OWENS AND THE RECENT BAND LINE-UP CHANGES. 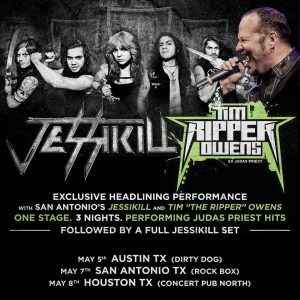 Sleaze Roxx: Jessikill recently played a number of shows throughout the state of Texas with none other than Tim “Ripper” Owens. How did this opportunity come about for Jessikill?

Jessikill: We first heard that Tim “Ripper” Owens would be headed to Texas through a local show promoter. The promoter asked if Jessikill would like to play with Ripper. It was an honor for us to say yes.

Sleaze Roxx: Was it difficult playing for such a long time giving that Jessikill was backing up Ripper for his entire set but also playing its own set?

Jessikill: We didn’t find it to be difficult for us to pull off two sets. For us it was heavy metal fun.

Sleaze Roxx: What were the highlights of touring with Ripper?

Jessikill: The best part of playing these shows with Ripper was collaborating with him. Tim is a very kind and extremely talented guy. Not to mention the exposure was great for Jessikill.

Sleaze Roxx: The remaining band members in Jessikill must have been quite frustrated with your now former keyboardist Rafael Llamas given that at least three of you had rather harsh things to publicly say about him via Facebook upon announcing his departure from the group. What were the issues with Llamas that led to him being kicked out of the band? 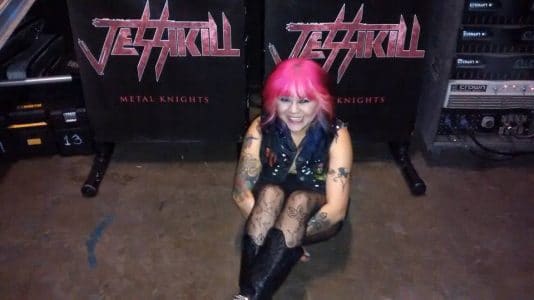 Jessikill: [Guitarist] Jyro [Alejo], [drummer] Alan [Cisneros], and myself opened our home/living space to Ralf. He was given lifetime opportunities, being fed, housed, with all the resources provided for him to live comfortably free of charge. Ralf’s mentality was not on the same level of understanding as we of what it takes to be a successful, professional and dedicated musician. We had no choice, but to view Ralf as a weak link after all the help we had provided for him that he would not accept. Eventually the frustration of trying to get Ralf to cooperate didn’t seem like it should be a priority any further. Thus, urging us to kick him out.

Sleaze Roxx: In hindsight, do any of you regret the way Llamas’ departure was handled?

Jessikill: We don’t regret airing out our frustrations about the situation. We felt that our friends and fans deserve to know the truth.

Sleaze Roxx: Why did Jessikill bring in a full-time keyboardist in the band in the first place?

Jessikill: Originally, Jyro stepped up to the plate to play keys and lead guitar at the same time. Not only was he capable of doing so, but we all liked having the atmospheric sound of keys in our music. Over time, we felt that Jyro was behind the keys too often and needed to express his stage prescence to the max.

Sleaze Roxx: Is Jessikill looking to replace Llamas with a new band member or will Jyro pull double duty and handle the keyboards once again?

Jessikill: We decided to not bring in another keyboardist, but to have Jyro and I trade off on key parts. 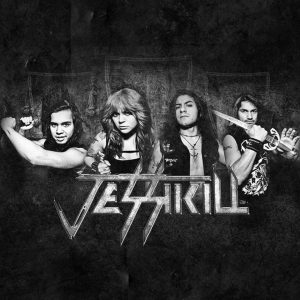 Sleaze Roxx: It looks like guitarist Joey V is no longer part of Jessikill either. What happened with him and who did you get to replace him?

Jessikill: Joey Villalobos is a very talented musician. The departure between Joey and Jessikill was simply differences in musical direction. Therefore, Joey went his own route. We’re pleased to be introducing Geo Roessler. He’s a long time friend of Jyro and Alan from 2008 and he’s stepped up to the plate to replace Joey and Ralf. We are very thankful for Geo, he’s just great.

Sleaze Roxx: The ‘Metal Knights’ EP has been out for more than four months now. Are you happy and surprised with the reception that it has received?

Jessikill: Since our release of the ‘Metal Knights’ EP, we’ve been very fortunate with all the feedback we’ve received from all over the world.

Jessikill: Our upcoming plans for Jessikill are to record a music video and get back into the studio to record our first full length, long, thick, hard and heavy album.