HUNTRESS ARE A BAND THAT IS GAINING MORE AND MORE MOMENTUM AND ESPECIALLY WITH THEIR LATEST ALBUM ‘STATIC’ WHICH WAS RELEASED IN LATE SEPTEMBER 2015. SLEAZE ROXX CAUGHT UP WITH HUNTRESS’ ECLECTIC FRONTWOMAN JILL JANUS TO DISCUSS VARIED TOPICS INCLUDING WHAT WERE HER LYRICAL INSPIRATIONS FOR THE NEW ALBUM, WHO WOULD SHE LIKE HUNTRESS TO TOUR WITH AND WHAT IS THE CRAZIEST GIFT THAT SHE EVER RECEIVED FROM A FAN — AND TRUST US, IT WAS INDEED A CRAZY GIFT! 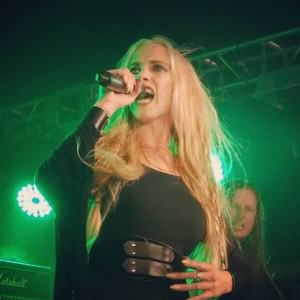 Sleaze Roxx: ‘Static’ is your third release. What is the message you want to send to your fans on this album?

Jill Janus: ‘Static’ is our heaviest and catchiest album so far. The message is different for everyone. The songwriting is our best yet. The lyrics are the most cathartic. I feel that fans of Huntress can relate to various aspects because so much of it is human, as opposed to the previous two albums which were more fantasy and occult inspired.

Sleaze Roxx: Where have all of your lyrical inspirations come from?

Jill Janus: The boys and I went into Judas Priest territory for ‘Static.’ We’re influenced by King Diamond /Mercyful Fate. Huntress is a modern metal band, you can really hear that in the production. But our roots are true heavy metal.

Sleaze Roxx: What is your music guilty pleasure?

Jill Janus: ABBA! It’s not really a guilty pleasure. It’s known [that] ABBA is my favorite band. There’s such a beautiful darkness and sadness within their songs. I want people to look beyond the sequins.

Sleaze Roxx: Do you think there will be a next “Metallica?” If so, who will carry that torch?

Jill Janus: I don’t want to be a downer, but probably not.

Sleaze Roxx: If you could tour with any groups or artists, who would they be and why?

Jill Janus: We’ve already toured with so many bands we admire such as Lamb of God, Arch Enemy and Amon Amarth to name a few. I’d like to tour with Judas Priest, King Diamond, Metallica — the greats! I also think Huntress would be a good fit with Avenged Sevenfold and Black Veil Brides. 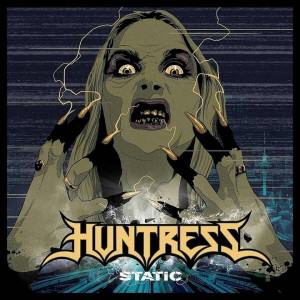 Jill Janus: I don’t really delve into questions like this, but I would like to the shed the stigma of female fronted bands. That term should be abolished. I strive to unsex my voice. I’m not here to change the world. I just live for my purpose. Doro has 30 years in metal. She’s earned it.

Sleaze Roxx: What is the most thoughtful gift a fan has given you and the most craziest/scariest gift?

Jill Janus: A fan gave me a little wooden box containing his dried belly button from when he was an infant. Crazy, endearing and disturbing! Of course I love it.

Sleaze Roxx: What can your fans expect from Huntress in the next two years?

Thank you to Jon Freeman of Freeman Promotions for arranging the interview!