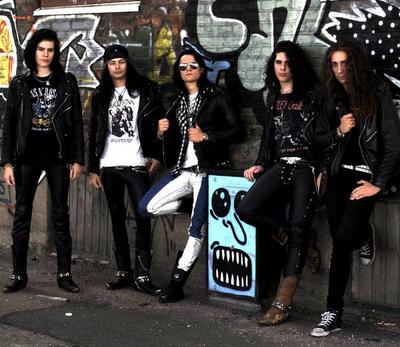 The amount of young sleaze bands coming out of Sweden these days is awe-inspiring. Every time you turn around a new group is vying for attention, and Bulletrain is one of the latest. Naming themselves after a story from Motley Crue’s autobiography ‘The Dirt’, Bulletrain burst onto the scene with their ‘Turn It Up!’ EP. In this interview drummer Jonas Tillheden talks about the history of this short-lived band, the scene in Sweden and how Crazy Lixx have helped them along the way.

Sleaze Roxx: In mainstream America the audience is, for the most part, subjected to hip-hop, bubblegum and grandpa pop-rock. Hard rock and metal has taken a backseat and gone underground, unless you were famous in the 70’s, 80’s or early 90’s… What’s it like in Sweden?

Jonas Tillheden: Metal and rock is very popular here in Sweden. Bands like Mustasch, Hardcore Superstar and H.E.A.T, to name some of our favorites, are filling up the big arenas over here. Here in Helsingborg, South Sweden, where we come from, the death/thrash/black metal scene is very big with bands like Soilwork, Darkane and such. But in Stockholm you have mostly the sleaze bands and the scene. Unfortunately this genre hasn’t got that much attention in relation to how much people enjoy the bands and the music. But we, and all the other bands, are fighting hard to conquer the big stages and media so it’s a lot of fun anyhow.

I wanna take the opportunity to thank the guys in Crazy Lixx, and their former guitarist Vic Zino as well, from me and on behalf of the guys in the band. They’re the biggest inspiration for us and they’ve also helped us a lot on the way. They are without a doubt Sweden’s best band in their genre, and every band has this huge respect for them. Despite their success, they still have both feet on Earth and are incredibly humble, which makes them stars in our eyes. The greatest! They’re actually recording they’re second album at this moment and we can’t wait to hear it. It’ll be a killer album!

Sleaze Roxx: Everyone has that one moment where they hear or see something and decide, ‘this is what I am going to do’. What was that moment for the band members? And following up on that, how long were you together before you realized that you had something that could be special?

Jonas Tillheden: Hmm… As a born rocker you know what you wanna do with your life. And when you’re a teenager you wanna set the world on fire! So the fun thing with Bulletrain is that we’re people that met randomly but had the same vision and influences of what we wanted to become. So we became this gang who wanted to affect the world like The Gunners (Guns N’Roses), and all the other great, big bands had. So from the first start jamming together we knew we had something special, this friendship and the same visions of what we wanted to achieve.

Sleaze Roxx: Jonas, that is an absolutely outstanding answer! If some of the bands that we love could get that feeling back metal would take a back seat to nothing. Lars Ulrich and James Hetfield getting along, Faster Pussycat getting along, one unified L.A. Guns, and Axl and Slash and company… just to name a few. We could have gotten a Dr. Feelgood 2 instead of a Hooligan’s Holiday, and metal would have never had to take a back seat to things like the Back Street Boys!

Jonas Tillheden: I agree with you and that’s truly a dream scenario. But I think at the same time it’s time for a new era! We sure want all the old favorites to do what they used to do so metal could be what it once was, but as I surf the net every day and listen to unsigned bands I realize that we don’t need our old heroes anymore, we have our new ones just around the corner, waiting for their time to succeed. If the media and music business would just open their eyes, they could see that Sweden’s like the 80’s Hollywood/Sunset strip. And we’re like the new Guns N’ Roses! Hehe I’m dreaming quite big here. Well, anyhow that’s my opinion.

Sleaze Roxx: What were the band members doing before being in this band? How long have you been musicians before forming this band? 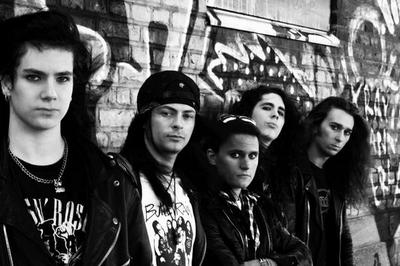 Jonas Tillheden: I guess we have to be honest and say that we just went in school and on our spare time we went out and terrorized our neighborhoods ’cause there wasn’t much else to do. The teenage riot you know, that was in all of us! Well, Matt, Robin and Robban used to skate a lot though. And to be honest again, we’ve almost just have been musicians as long as we’ve got this band. Me and Matt played together and started to learn our instruments back in 2002-03, the other guys just came along around in 2006 and didn’t have that much of experience before Bulletrain. So we’ve developed our skills very quickly I guess! So the songs you hear live and on myspace are among the first songs we’ve ever written!

Sleaze Roxx: What types of guitars do the guys use, and what made them decide to use those guitars?

Jonas Tillheden: Robin likes to play Gibson guitars, one Les Paul and one Flying V. The choice of guitars is based on the killer sound it brings and the amazing look of them. The fact that some of the greatest guitarists ever used to play the same guitars has something to do with it too of course.

Matt has his Jackson, ’cause he can’t afford a Gibson Les Paul! He-he But as you can hear on his solos he plays that guitar until it’s blowing smoke!!

Sleaze Roxx: You said that you named the band Bulletrain after a story that you read in ‘The Dirt’ by Motley Crue… as musicians have you had any ‘dirt’ moments, or any Spinal Tap situations that you’d like to share?

Jonas Tillheden: Haha yeah that story was something alright! I guess I got the feeling that told me when I read The Dirt, “I wanna be a rock star and do all those crazy things and get away with it!” That’s why we got our name, Bulletrain… from their accident on a Bullet train in Japan.

And sometimes we’re more rock stars than they are! We played a gig in midsummer where the host kinda’ fed us with beer so the guys nearly couldn’t hold the guitars when it was time to play! We thought we sounded great anyway! But I guess today you can’t be that dirty and hopeless like Motley Crue ’cause you can’t sell that many CDs, so you gotta be a great live band and always give the audience what they deserve to make it.

But I can tell you that we had a period where we played so loud that we knocked out the power in three places in a row, we played on! I wanna call that Heavy Metal! He-he

Sleaze Roxx: Guys, I want to thank you for your time, and for having the killer sound. It is a flashback and a flash-forward at the same time. It’s nice to know that there are young bands out there just keeping the dream alive!

Thanks to Jonas Tillheden and BC Beneke