Bassist Jonathan “JB” Brightman was one of the founding members of Buckcherry. No need to tell you about them, as they are a high octane over-the-top rock ‘n’ roll that has scaled greater heights their second time around. Brightman didn’t sit around idle when Buckcherry disbanded after the ill fated Time Bomb album, instead he put his nose to the grindstone and began writing. In 2010, he will unleash the fruits of his labor with a re-release of Black Robot’s debut album. Black Robot are an eclectic band that culls from genres such as classic rock of the 70’s, punk, jam bands, no-frills hard rock and power-pop. Their self-titled album is sure to make many top 10 lists at the end of the year. Sleaze Roxx’s Ruben Mosqueda caught up with JB a couple of weeks ago and talked about the band and the album.

Sleaze Roxx: How long after the demise of Buckcherry did you begin working on new music?

Jonathan “JB” Brightman: The way this happened…right after I left Buckcherry Huck (Johns, singer) was moving to Los Angeles. I had made friends with him and we just started writing. So we had written some songs, but there was no agenda to create a band.

Sleaze Roxx: How long has Black Robot been together?

Jonathan “JB” Brightman: It was about 2001 when we started to conceptualize what is now Black Robot.

Sleaze Roxx: One incarnation of Black Robot featured Yogi and Devon Glenn who were both bandmates of yours in Buckcherry. Why aren’t they in the band at this point?

Jonathan “JB” Brightman: What Huck and I really intended to do was to have Yogi (former Buckcherry guitarist) and Devon (former Buckcherry drummer) in the band, but that didn’t really work out. I needed some time away from what would become Black Robot. When it came time, I called Yogi and Devon and said to them, “Let’s just go in the studio for two weeks and let’s make a record.” I didn’t have any expectations. I wanted to get in the studio, record, have a good time and if a great record came out of it then we’d release it. It was no pressure.

The reason Yogi and Devon aren’t on the record is because Yogi went on tour with Chris Cornell and couldn’t be at two places at the same time, he needed to work and I couldn’t say don’t take the gig. Devon had gotten married and started his own business; his priorities in his life were different. I understood where he was coming from. It came down to this — they weren’t in a place to do it and I couldn’t wait until they could, or would, do it. I needed to make this record. I’ll clarify, this was a vision that was Huck’s and mine. This wasn’t going to be a band, we needed to get these song recorded and if it was good we’d release them.

Sleaze Roxx: What’s the origin of the name Black Robot?

Jonathan “JB” Brightman: The name is something that I had been holding on to for some time. I conceptualized the figure which you see on the album cover and I wanted that figure to represent the band. I think it’s a strong, menacing figure that isn’t too far from something Iron Maiden would use. Like their mascot Eddie, I think as we begin to gain a fan base and get bigger we’ll be able to have our own identifiable figure that can progress as the band does. We wanted the focus to be on the visuals, we didn’t want the focus to be on the traditional thing, band members; four or five guys in the band. There’s nothing original about five guys lining up in a photo, of course we do that too, but that’s not the focus. We wanted to have a powerful figure that would represent the music and what we stand for.

Sleaze Roxx: Black Robot is eclectic. How would you describe the sound to someone that hasn’t heard the band? 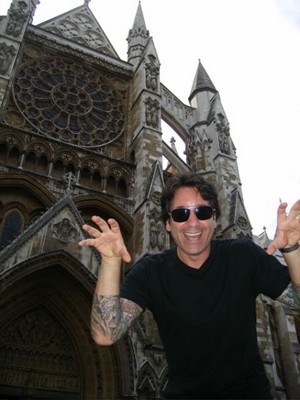 Jonathan “JB” Brightman: I personally would refer to Black Robot as retro-modern hard rock. I think people would understand and conceptualize that.

Sleaze Roxx: Songs like “Baddass” and “Girls Kissing Girls” are the songs that sound closest to your former band. Would it have been way too contrived to go in that direction — the AC/DC driving riff groove oriented rock?

Jonathan “JB” Brightman: We make the music that comes out of us. It’s what comes naturally, it’s not forced or calculated. As corny as that might sound that is really just how we are. I know they have some of the same influences as us, so I see that at times there will be a comparison. We wanted to go somewhere that Buckcherry didn’t go. I’m proud of the time I spent in the band, but that was a longtime ago. I was a founding member of that band in 1995, a lot has happened between the beginning of that (Buckcherry) and the beginning of this (Black Robot).

Sleaze Roxx: Who’s idea was it to cover the J.J. Cale track “Cocaine?” Did you guys have to think twice about putting a cover on the album?

Jonathan “JB” Brightman: We didn’t second guess the thought of it at all. We love covers, we love playing them. I think every band likes playing the music that has influenced them. I think the fun thing about doing a cover is when you do it your way. Not note for note like the original but you add a little something that makes it familiar but new again. I brought the idea to Huck about covering “Cocaine”, coincidentally he had covered the song in a previous band he played in. We had the riff which we rewrote and he started singing over that in the studio and it just came together almost instantly. It was a joke at first because we had said to one another “how cool would it be to do this song?” When we listened back to the final product it turned out great and we stuck it on the record.

Sleaze Roxx: How did the recording process work? It sounds like you and Huck had the songs ready and you got a band together and knocked it out in the studio.

Jonathan “JB” Brightman: We went out to dinner as friends, I said, “We can get a couple of weeks in the studio and see how it sounds?” We were even considering writing some music independently and then bringing it to each other, instead we went old school. I’ve heard stories about the Rolling Stones going into the studio with some songs and jamming on them and recording what came out of the jam. That was the approach and the result was what you hear on the record.

Sleaze Roxx: Was there stuff left over from the recording session them? 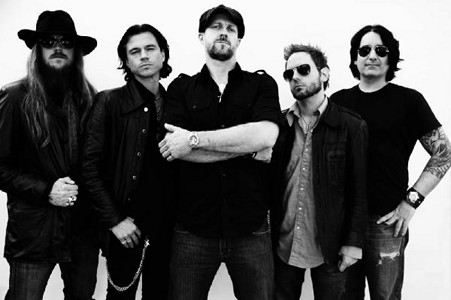 Jonathan “JB” Brightman: There was actually quite a lot left believe it or not. I’ll be honest, there was some stuff that didn’t sound good at all, but then there was stuff that might be for later use.

Sleaze Roxx: Are there a couple of songs on Black Robot that you think define the band?

Jonathan “JB” Brightman: I think “Baddass” is a great track, it has that kind of AC/DC driving riff and rhythm. I also like the song “In My Car”, it features some great melodies. As far as ballads go I’m really proud of “I’m In Love.” We were aiming for a well rounded record, to say that any one song would define the band is difficult to do. We wanted to give the listener, and ourselves of course, an array of emotions, feelings and sounds. We wanted Black Robot to play out like the records we used to listen to when we were kids, where every song was different and had a different feel to it. And having a balanced record was important and I do believe we achieved that.

Sleaze Roxx: The album Black Robot is about to be re-released, it’s due on April 13th I believe. What are your tentative plans to tour behind it in 2010?

Jonathan “JB” Brightman: The idea is to play anywhere and everywhere. We need to just get out there and cut our teeth on the road. We are in the process of booking a West Coast tour, we’ll do what all new bands do, and we’ll star in night clubs. We’ll take all the gigs we can get; we’re going for a real humble approach to this. We’ve all been around the block before so we know we need to start small and build this from the bottom up.

Sleaze Roxx: Any specific band that you’d like to tour with?

Jonathan “JB” Brightman: One band that comes to mind is Avenged Sevenfold. They are high energy, they are heavy, they are melodic and doing something special. I’d jump at the chance to do something with them down the road.

Sleaze Roxx: Thanks so much for the interview JB.

Jonathan “JB” Brightman: Anytime and thank you so much for your interest in the band.