With the release of the ‘Anvil! The Story of Anvil’ documentary a few years ago, the Canadian metal band Anvil was placed back on the radar of just about every metal fan and beyond. Since the advent of that film, Anvil has released two new studio albums and one greatest hits compilation, and shows no signs of slowing down. Sleaze Roxx caught up with the charismatic lead singer/guitarist Lips to discuss everything from the impact of the film to Anvil’s latest album ‘Hope In Hell’ to the various changes that the band has undergone in the last few years.

Sleaze Roxx: I caught Anvil’s recent October 18th show in Toronto, and it was great. The band, and especially you, looked like you were having lots of fun up there. Do you appreciate playing live even more these days?

Lips: No. I’ve always appreciated playing live — that’s why I do it. That’s the main driving force why I’m in a band — why I do it all. That’s how I get my payment.

Sleaze Roxx: What has struck me the most while viewing ‘Anvil! The Story of Anvil’ back at the premiere, and since that time, is the story of the band’s perseverance and self-belief that shines through the film. What do you think was the biggest story that came across from that film?

Lips: Well, it’s what it was. I don’t know — what was it? A show with a bunch of guys going after their dreams. What was it? You answered it before you asked — perseverance. Well, that’s what it was about.

Sleaze Roxx: Would you consider the film a pivotal moment in the band’s history?

Lips: Hmmmm. Well it’s hard not to — it changed everything, didn’t it? So, I would say it’s really pivotal (laughs).

Sleaze Roxx: What would be the major changes that the film brought?

Lips: I don’t have a day job anymore. That’s about the biggest difference.

Sleaze Roxx: Has the release of the film coincided with increased CD sales compared to the years prior to the film?

Lips: Yeah, sort of. I think it’s an illusion in a certain sense because the movie people are not record buying people. So I don’t think it made that huge or significant of a difference. I’ve had record deals for decades so it didn’t change that (laughs). I don’t know how to answer it.

Sleaze Roxx: Anvil was, for the longest time, a four piece band but in the last few years you switched to a three piece outfit. How was the transition and is it more difficult playing the older Anvil songs as a three piece?

Lips: No because actually in reality most of our recordings were all done with a three piece anyway. Certainly the majority of songs were written as a three piece and recorded as a three piece and when we had a second guitar player we did a couple of overdubs. So in eventuality, we found it redundant. It wasn’t adding anything. In fact, it was actually taking away, particularly in the live environment because when you have two guitars, drums, vocals and bass, the guitars are so loud. All my favorite bands that I grew up with were all three piece, whether it had a singer or whether one of the guitar players sang. It’s a lot more trimmed down and it’s easier to deal with on a social level not dealing with a fourth member.

And there was a great deal of redundancy. The second guitar was only doing what I was doing — and at the same time I can’t hear Robb Reiner’s drums and neither can the people so that’s no good. It just went that way. That’s funny because when we talk about that — you know, Motorhead went through a period of time where they had two guitar players. I remember when they went back to three piece, I asked Lemmy about it and he goes [Interviewer’s note: Lips doing an excellent Lemmy impersonation] “who the fuck needs it?” (laughs).

Sleaze Roxx: That is funny! Now I would have thought that Glen Five would have stuck around for the good times after the release of the film. I was surprised that he was eventually out of Anvil. Some websites cite the old classic “creative differences” as the reason why he is not in the band anymore — what were the exact reasons why he left or was let go?

Lips: Well he certainly wasn’t let go — he walked out. That’s about it. Not much more to say. What is there to really say? It’s like, you know, people get disenchanted and they walk away. They won’t look that I’ve played with and done that. So, certainly it wasn’t something that I was intimidated by or shattered by. Just more shit you know.

Lips: Really well. Actually, it’s quite amazing really because when you hire an old friend, it doesn’t feel like anything has changed. And in fact as I go, it feels like it’s been like this all along. So, it is kind of weird (laughs) and I don’t know how much more I can say than that. Same age group! Of course I’m older than Glen but that’s what I mean. It’s like some of the separation could be age — just the way you have an outlook on life when you’re 15 years apart it — there’s a difference.

Sleaze Roxx: ‘Hope In Hell’ has been out now for about six months and Robb Reiner had described it in a prior interview as 1981 to 1983 Anvil type music. Would you agree with that assessment?

Lips: I don’t analyze to tell you the truth. It’s just a steady flow — I’ve been doing it for years and years and it never stops. It’ll only stop when I die or when I decide I want to stop. So I don’t really stop and think about the preciseness of what’s going on. I think I’ve stopped doing that a few albums ago (laughs). You know, it’s just — you’re right and whatever comes natural is what you’re doing. You’re not premeditating. You’re not calculating. You’re just doing it. So, if that’s the way people perceive this album, that’s fine. I didn’t do it on purpose.

Sleaze Roxx: What are your favorite songs off ‘Hope In Hell’ and why?

Lips: It’s hard to say what my favorite is because each song is so unto itself. That’s the thing about Anvil albums — every song is so different from each other there’s a certain thing about each song so if any of them are missing, then it’s incomplete. Outstanding or the most favorite? There are all different reasons why you would have a favorite of this type or favorite of that type. You know, one song I might like the guitar solo and that makes it maybe a little bit more sweet for me. But then maybe I might not like the lyrics as much as another song or the melody or the riff (laughs). So, that’s why it’s really difficult to say — it’s sort of like even across the top. I do the best I can and enjoy each song for what it is. That’s what it really is — otherwise it wouldn’t be there at all. I have to love it.

Sleaze Roxx: Some of the songs off ‘Hope In Hell’ have a pretty straightforward message. Is there an inspiration or story behind a song like “Shut The Fuck Up”?

Lips: Yeah (laughs). I think just getting sick of people telling me what to do or tell me what to think. You know, I think it’s a really common sort of thing. So I don’t really know what inspired it. Maybe people talking too much? I don’t know (laughs).

Sleaze Roxx: ‘Hope In Hell’ has quite the complex album cover, there are lots of details on it. What was the idea behind the artwork?

Lips: The idea behind the album cover was what the title says. In essence, it’s basically Noah’s Arc in hell but it’s an anvil! It’s somewhat of a reflection of the way I look at my life. I’m a drifter in a sea of hell in the only sanctuary I know… the anvil.

Sleaze Roxx: I noticed that Anvil recently got a new website. When did this occur and are you happy with the end result? 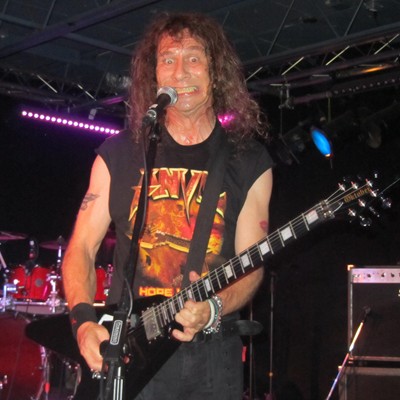 Lips: To be really honest with you, I think I pay more attention to the FaceBook stuff — there’s a lot more activity there. We didn’t actually have our own site until sometime after the movie. Just didn’t think it was necessary with Tony Gallo doing such an incredible job of it in Thunder Bay and doing it since 1996 — pretty much since computers (laughs). You know, since the onset of computers and the internet, there’s been an Anvil site and Tony has been at the helm. He’s a very very very devoted fan. He has more memorabilia than I do (laughs).

Sleaze Roxx: What’s next for the band in the next year or so?

Lips: More (laughs)! Never ending. We’re about eight songs deep in the next album already so they’ll be another album. They’ll be more touring. There’s more.

Sleaze Roxx: I read from an interview with Robb Reiner that there were plans to play the first three CDs only during the shows. Will that be materializing in the future?

Lips: Hard to say — it’s really hard to say. I don’t know. I can’t even approach it. I mean, why? We’re playing a good portion of that music anyways — I don’t know. I’ll have to think about that one. Still thinking about it.

Sleaze Roxx: What’s your favorite Anvil CD if you exclude ‘Hope In Hell’?

Sleaze Roxx: And why is that?

Sleaze Roxx: Yeah, I think so. I’m going to end the interview with one likely tough question for you. What are your top three all-time favorite albums and why?

Lips: ‘Deep Purple In Rock’ — it’s an incredible album, some of the best stuff ever. Probably ‘Master Of Reality’ — the third Black Sabbath album. And geez, that third one is going to be the tough one. It might be Ted Nugent’s ‘Stranglehold’ album [Interviewer’s note: the ‘Ted Nugent’ album] or his ‘Cat Scratch Fever’ album — one of those two.