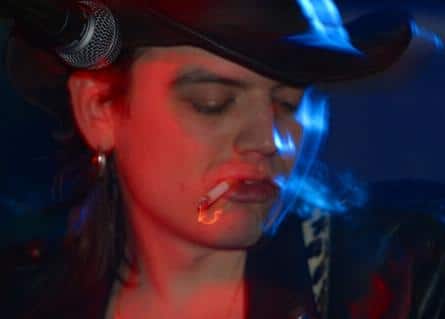 The Cowboy Prostitutes, www.cowboyprostitutes.net, are one of the most exciting new sleaze bands on the scene today. Hailing from Sweden, the group’s self-titled debut album was one of the greatest releases of 2005. In this interview, vocalist/bassist Luca Isabelle gives us the latest news about a band everyone should be checking out.

SR: I thought your debut was one of the best albums of 2005, how happy were you guys with all the great press you’ve been getting?

LI: It was great! The press was really kind towards us. It’s amazing to have so many great things written about our music and still don’t get the interest of the big labels.

SR: But Sweden seems to have a growing hard rock scene, are the big labels in your country starting to take notice?

LI: In a way you could say they are, but it still smells like fake, manufactured music which is not that different (in my eyes) to all that MTV shit. No one’s really looking at the underground where real music is being made. We have to keep pushing and maybe one day we’ll get through and get heard again.

SR: Speaking of getting heard, how can someone buy your debut album?

LI: That’s a good question. We have started selling the songs on our web-site as mp3s, but I think you can still order it from various on-line stores. We can’t print more copies right now and the only way that would happen is if the label that’s gonna pick us up next (and there will be one!) will want to reissue. Right now we have a new album waiting to be released and that’s what we’re concentrating on.

SR: So what exactly happened with Retrospect Records to make the album so difficult to find?

LI: I think that Joe Dolan (former owner of Retrospect) had a big passion for rock music but that’s not enough to promote a band: you also need the contacts and the will to push it forward. I think his inexperience didn’t work in anyone’s favor. In the end he actually got pissed off with us for promoting the album in Sweden ourselves: he wasn’t putting it in the shops so we did with the copies we had and he didn’t like that. But that’s in the past now. The new album is a killer (I’m serious). Even better than our debut and that’s what we need to concentrate on right now.

SR: Is the new album completely finished and you’re just looking for a label to release it?

LI: The songs are done and we recorded (actually I did!) a 3 songs demo with which we hope to get the attention of the right label. The total of the songs is 10 but there will be some extra number in form of a couple of covers too. And let me tell you: the new songs WILL drive you mad!! We have created some great, catchy tunes. I can’t wait to see the people’s response on them. So hold on and you’ll get your chance.

SR: Do the songs have that same in-your-face sound of the debut?

LI: They’re even more “in your face” then the first album. This time we’re going for the kill. There’s not much more to say: the new songs really speak for themselves. You’ll see.

SR: Does it have a title and artwork already? 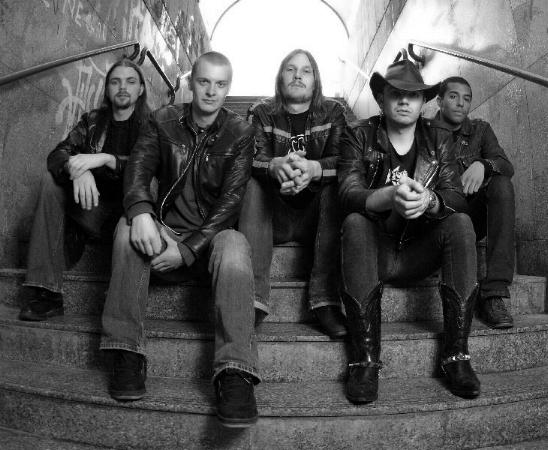 LI: No title and as for the art work we started working with this guy named David Cederlof (a genius really) who’s been drawing our new logos and created from our ideas this “Cowbitch” character that has become the symbol of the band.

SR: Do you have any labels making offers to release the CD?

LI: We’ve been in touch with a few labels but no offer has been made yet. Maybe we’re asking too much but I really believe in my music and I won’t give it to the first label that comes to me.

SR: When the album does get released do you hope to tour outside of Sweden for it, maybe even North America?

LI: Of course! We LOVE to tour. We’ve already played outside Sweden last year (England, Italy, Finland) and we’re always hoping to get new gigs ’round the world. North America sounds like a dream come true, but it’s not as easy and we want to do it right. We’ll see. If we get picked up by the right label… maybe…

SR: What have been your most memorable live shows so far?

LI: All the shows in Italy with our friends Pink Lizard have been great, but the most memorable one has got to be the last one in our home town Orebro where a lot of friends had filled up the venue and created a GREAT party atmosphere (we drank ’til 8 in the morning!).

SR: Would you say you guys are living the sex, drugs and rock’n’roll lifestyle?

LI: Ha haha. Is there really such a thing? We just enjoy our life playing the music we love and we NEVER say no to a good party.

SR: What are some of the craziest things that have happened to you on the road so far? 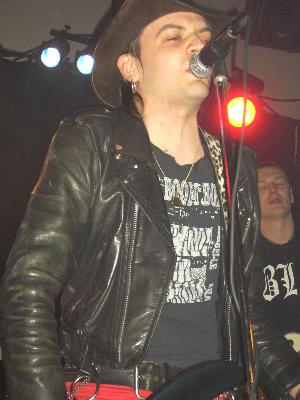 LI: There’s many, but one of the most memorable was in Italy where we ended up playing in the middle of nowhere in a club pretty much like the one in the movie “From Dusk ‘Til Dawn”. I couldn’t believe it when we got there that this little house in the woods had a Rock venue in the back (and a pretty big one too!!). The crowd was shit so we told them to fuck off and just drank beer all night with our friends Pink Lizard (you should check them out, by the way) and nearly missed the plane to London the day after. But that’s just every day life when you’re on the road with a bunch of renegades like us.

SR: Why does it seem like so many awesome 80s sounding bands are coming out of Sweden? Did Sweden miss out on hair metal the first time around, or has it just returned?

LI: I think it has just returned. Don’t forget that bands like Backyard Babies (which have been dominating the Swedish Rock scene for the last few years) come from an 80’s sleaze background. I think the 80s are coming back in music, fashion, movies… I don’t know if it’s that good for bands like us since we risk becoming part of a “movement” which is going to fade as fast as it’s been created (like The Darkness). We (Cowboy Prostitutes) play the music that comes from our hearts. If it’s fashionable or not… we don’t give a fuck.

SR: How shocking was the death of Crashdiet’s Dave Lepard in the Swedish rock community?

LI: It was a big kick in the teeth, you can say. I didn’t understand it and probably never will…

SR: What sort of bands influenced you?

LI: I will have to say anything between Guns’n’Roses, L.A. Guns, Motley Crue, Motorhead… But I also listen to stuff like The Cult and Punk Rock like Social Distortion (I love them!).

SR: Tell us how the Cowboy Prostitutes came together.

LI: I moved to Sweden in 2002 after 6 years in London where I was playing Rock’n’Roll with several bands (Sonic Boom Boys being one of them) and drinking my life to hell. Once I arrived in Sweden I put up a note in one of the local music stores looking for musicians. And three days later I get a phone call from this dude Anders who’s a guitarist and knows a drummer too. We meet up and become friends. Then we start writing songs together and within a couple of months we’re in the studio recording our first demo “Take no shit!” Then we fired the drummer and got the wild animal that’s Pistolper and the keyboard player Andreas Stromback (the quiet guy). Then we recorded the album. Then Anders left the band for personal reason and we got our friends Tobbe Johansson and Simon Solomon on guitars (the best guitarists in town, really) and now we just play our brains out.

SR: You don’t usually hear keyboards in sleazy music, what do you think that instrument adds to the Cowboy Prostitutes sound?

LI: It gives it that saloon bar feeling to it. I think that without it Cowboy Prostitutes would be just another rock band (still a pretty good one) but with it we become more original (there’s not that many sleaze bands that can give you a song like Ghost of Venice).

SR: What would you say are your favorite songs that you have recorded, and the one that is most fun to play live? 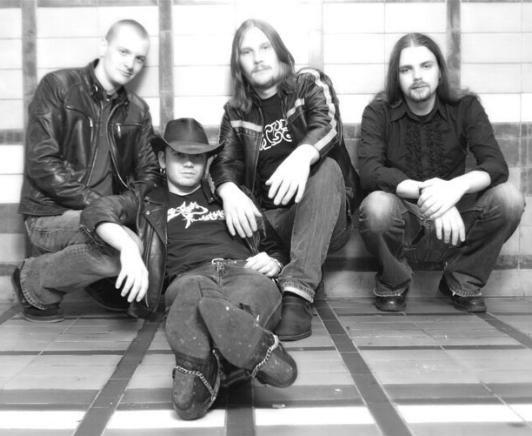 LI: Well, Ghost of Venice is one of them. One of the new songs called “Crime City” is my favorite at the moment but when we play live I always go mad on “Blood on your blade”.

SR: Do you do any cover songs live?

LI: Since the very beginning we’ve been doing “Saturday Night (alright for fighting)” but I just decided not to play it anymore ’cause I get bored with it, so now instead we’re doing “If You Want Blood You Got It” by AC/DC and it rocks!. We used to cover Junkyard “Can’t Hold Back” but got bored of that too (after 3 years!).

SR: Have you ever thought of releasing a live album or even a DVD to keep fans happy until the new album is released?

LI: That would be a good idea but if we should come out with a live album (or a DVD) it would have to be well recorded and we haven’t really done that many good recordings of our gigs. And I wouldn’t try to sell some shit to the fans. No way.

SR: Where do you picture the Cowboy Prostitutes in a couple years?

LI: My plan is to have done a couple of albums and played in the States in about two years. My dream come true would be to make enough money to be able to tour the world bringing our music to as many people as possible. It really seems to be a constant fight for us. We’ll see who wins. I put my money on me.

LI: Final words: To all you rockers out there: hold on… Cowboy Prostitutes is coming to rescue your favorite music.

Thanks to Luca Isabelle