I LIKE LISTENING TO PODCASTS MORE SO WHEN I’M DOING STUFF AROUND THE HOUSE. I’M A HUGE DANKO JONES FAN AND OCCASIONALLY TUNE IN TO HIS PODCAST. I LISTENED TO HIS LATEST PODCAST THAT FEATURED SINGER MITCH MALLOY WHO RELEASED A VAN HALEN DEMO ON DECEMBER 8, 2015 OF THE SONG “IT’S THE RIGHT TIME” WHICH WAS RECORDED BACK IN 1996. THE SONG IS RATHER GOOD SO CHECK IT OUT BELOW! ANYWAYS, I HAD SPOKEN TO MALLOY ROUGHLY NINE TO TEN MONTHS AGO WHEN THINKING OF IDEAS FOR ANOTHER SITE. I ENDED UP NEVER USING THE INTERVIEW FOR ANYTHING. DURING THAT INTERVIEW, I ASKED MALLOY ABOUT HIS TIME IN VAN HALEN AMONGST OTHER THINGS. SO WITH DANKO JONES RECENTLY GETTING MALLOY ON HIS PODCAST AND MALLOY HIMSELF RELEASING HIS VAN HALEN DEMO, THIS WAS THE PUSH NEEDED FOR ME TO DIG THROUGH MY ARCHIVES AND FINALLY DO SOMETHING WITH THIS INTERVIEW. ENJOY AND YOUR FEEDBACK IS ALWAYS WELCOME. 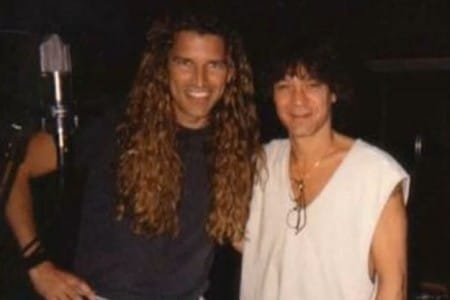 Sleaze Roxx: Mitch, you were a staple in ‘Metal Edge’ magazine which I bought monthly growing up. You were in there a lot from album reviews to interviews to concert reviews. You were marketed to that particular genre of music; I get that press is press but do you think that was helpful or harmful to your career?

Mitch Malloy: You know all exposure is good exposure. I had a complaint with it to be honest. What happened was that the editor Metal Edge [Gerri Miller] really liked me. She came to see me live and felt that I could be a really big star. She staked her claim on me. I didn’t tell her “don’t put me in your magazine.” I told my manager to tell her “don’t put me in your magazine.” He said that he would but I don’t think that he ever did because there I was every month [laughs]!

Sleaze Roxx: You were in the magazine. It almost got to the point that I didn’t like you! I knew then that you were a great singer and great songwriter and you didn’t really fit in with that genre. You fit in well with Bon Jovi but not the glam bands.

Mitch Malloy: [Laughs] I agree. That’s why I asked my manager to ask to not be featured in that magazine.

Sleaze Roxx: You issued your debut self-titled album in 1992. You have writing credit on all the tracks on the album. Was the material fresh new stuff or was it stuff that you’d refined duking it in the clubs?

Mitch Malloy: A bit of both. A lot of the songs were from my years working the club circuit building my repertoire; my catalog. I did write some new songs and those were provided by the record company. I didn’t know that many people at that time. I had gotten this deal with RCA and I didn’t know any of the top writers like I do now. I think I was really lucky because I do feel that I had some very good chemistry with the people. I think you can hear it on the album.

Sleaze Roxx: Your album came out right around the time that the shift was starting where the glam era was ending and people were turning to harder, edgier, less image oriented music. Yet you were being marketed as one of ‘them.’ 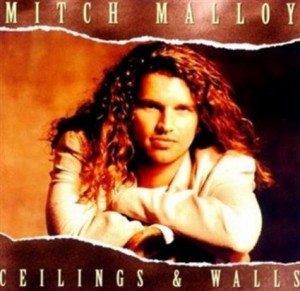 Mitch Malloy: That was a weird time for sure. I’m thankful that my management was cognizant enough to know that our window was closing. The label took so long that by that point the window was closed. My label loved me. They said “We love you. You’re so talented.” The reality is that they took too long to get the album out and it was just too late.

Sleaze Roxx: What drew you to Nashville? Was it the opportunity to write for other artists?

Mitch Malloy: Initially it was to write for my second album ‘Ceilings & Walls.’ It’s so much more laidback here and there’s so much talent and so many songwriters. I really felt that Nashville was where I needed to be and I was right.

Sleaze Roxx: I was waiting for the dust to settle on this but there’s a lot of people out there that don’t know that you auditioned for Van Halen and landed the gig prior to Gary Cherone.

Mitch Malloy: Yeah, that was documented on the ‘Mitch Malloy Van Halen’s Lost Boy’ which is up on Youtube. It’s true I was in Van Halen. I’ll give you the short version. A guy by the name of Steve Hoffman — he used to my road manager — he went on to work for Ray Daniels who started managing Van Halen at that time. I was told that Eddie [Van Halen] had come in and he wanted to get rid of Sammy [Hagar]. There were a lot of issues with Sammy. There was a lot of friction and they started talking about replacing Sammy. Steve says “I know a guy that could replace Sammy. His name is Mitch Malloy. I used to manage him.” This was in 1996. I received a phone call from Eddie to fly out to L.A. at 5150 and ‘hang out’ with him and the band. I spent a few days in LA. It was amazing and surreal. Our time concluded with Ed saying, “Congratulations! You’re in the band.” I was ecstatic! Can you imagine [laughs]?!

As I’m getting ready to leave, Ed hands me a tape of an instrumental of the band. Ed says,“Turn this into a song.” I wrote the lyrics and laid down vocals and the song is called “It’s the Right Time.” You’ve probably heard an excerpt of it on Youtube [see below]. I was in the band and the next thing I know, I see Ed and the guys on MTV with David Lee Roth! I was floored! I wound up leaving because there were certain things that didn’t happen and I just didn’t feel right about it. They didn’t reunite with Roth — enter Gary Cherone.

Sleaze Roxx: So was the the end of the relationship with Eddie and the Van Halen guys?

Mitch Malloy: Well, I have had two conversations with Ed since but it’s been a while. One via phone and another when they played in Nashville. He was pleasant and he understood why I couldn’t do the Van Halen gig.