GUITARIST OZ OSUKARU MAY ONLY BE 31 YEARS OLD BUT HIS BAND OSUKARU HAS ALREADY RELEASED THREE STUDIO ALBUMS AND THREE EPS. A VISIONARY, OZ OSUKARU IS ALWAYS LOOKING TO DIFFERENTIATE HIS GROUP IN THE MELODIC ROCK WORLD. SLEAZE ROXX CAUGHT UP WITH OSUKARU’S TALENTED GUITARIST AND BAND LEADER FOR A CANDID CHAT INCLUDING HIS RECENTLY DISCOVERED REASONS WHY HE ADMITTEDLY HAS BEEN DIFFICULT TO WORK WITH IN THE PAST. 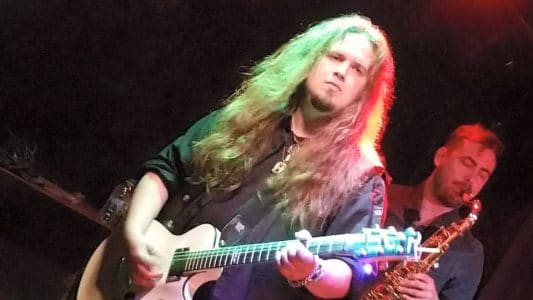 Sleaze Roxx: A few months ago, Osukaru announced that female singer Cecilia Camuii had left the band and been replaced by singer/keyboardist Eugenia. What prompted the change in female vocalists?

Oz Osukaru: Cecilia left due to other commitments, which started to take too much time away from the band. Her career in musical theater started to grow and she found herself in a position where she basically had to choose, since she started to get double booked all too often. Working with musicals is her number one passion so even if her leaving the band was a tough decision, both for herself and for us, it was the best thing to do.

Sleaze Roxx: How did you find Eugenia?

Oz Osukaru: She basically just responded to my ad on the internet. She came over to my studio and recorded a few tracks. I just knew right then and there that she was our new lady.

Sleaze Roxx: As I started looking into the history of the band, I realized that Osukaru have had a lot of band member changes in the group’s tenure since 2009. Why has it been so hard for you to find the right bandmates? 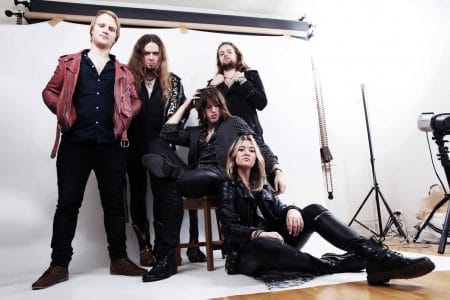 Oz Osukaru: Yeah, it’s been tough. In most situations, it just didn’t work out because of where we stood in life or because of different musical goals. But the truth is, I’m not always the easiest guy to work with. I have a very clear vision of what I want Osukaru to be like and I understand that because of this, some people might feel like hired guns instead of being a part of the band. Early last year, I finally got diagnosed with Aspergers Syndrome and ADHD [Attention Deficit Hyperactivity Disorder], which actually explained some behaviour of mine. So with that in mind and with great support from the guys in band, I finally got some time to work on myself. Now, the chemistry within the band is nothing but wonderful. The guys know where I am, what I’ve been through and what I’m still going though and it makes it so much easier. That being said, I am still friends with most former members of Osukaru. Cecilia Camuii, who sang on ‘Triumphant’ and ‘Transition’, is still a very good friend of mine. Chris Tiann, who sang on ‘Salvation’, and I both became fathers with just days apart, so we talked a lot during that time.

Sleaze Roxx: Since 2010, Osukaru already has an impressive amount of records with three albums and three EPs if you count the unofficial covers EP. Which is your favorite release out of the six and why?

Oz Osukaru: Geez, that’s a tough one. I am very proud of them all but still I’d like to say ‘Transition.’ Not because it’s the latest one but because it’s the record where we actually started to work as a band and took our music and concept to the next level. It’s our best sounding and our best looking release to date, for sure! 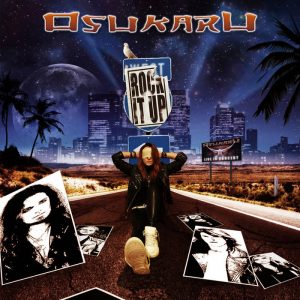 Sleaze Roxx: What made Osukaru decide to release the new four-track MCD called “Rock It Up” at this juncture?

Oz Osukaru: Well, we wanted to release something featuring Eugenia to make her feel at home before going on tour. We knew we wouldn’t have the time to record a full album by then, nor could we do an EP, so we just recorded a MCD and released it as a tour exclusive. We wrote two new songs and recorded a new version of “Driven By Love” and packed them on this release together with a karaoke version of the title track.

Sleaze Roxx: The MCD is only available as a tour exclusive and in your official online shop. Why did Osukaru decide to go that route?

Oz Osukaru: Because we will actually release a new album later this year. Fact is, the idea of recording a MCD didn’t come to us until a few months before the tour so we had to act fast. It was mostly created as a sample of how we sound with our new lady onboard and releasing it as an exclusive tour item felt like a good way to get it out. Our main focus at this point is on our next album. 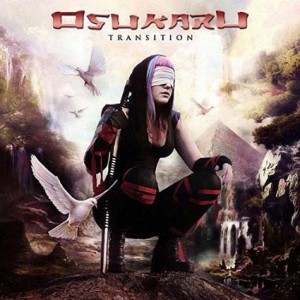 Sleaze Roxx: When my Sleaze Roxx album review of ‘Transition’ came out in October 2015 where I stated that I wished that Osukaru rocked out a little more, you advised me that the group’s new album would be heavier and have more edge. When and why did you decide to go that route for the new album?

Oz Osukaru: It’s heavier in the sense that we have less pop oriented songs on it. Melodic rock and AOR with a tougher edge is what we do best and it’s what our fans want to hear. So on the next album, we go all out. We are also making it a concept album — our very first — which is exciting. We actually started writing the songs last summer and we have been recording it in between shows. It will probably be out around Christmas.

Sleaze Roxx: A concept album? Anything else you can tell us about it?

Oz Osukaru: Not at this point except for it being based on one of my all-time favourite movies. Making this album is a dream come true on so many levels. You just have to wait and see [laughs].

Sleaze Roxx: Your group is somewhat unique in that it has two singers trading lead vocals on a lot of songs. What made Osukaru decide to go that route?

Oz Osukaru: When I reinvented the band in late 2012, I wanted it to be a bit different so to add another vocalist to the line-up would open the door to a wider range of melodic rock. 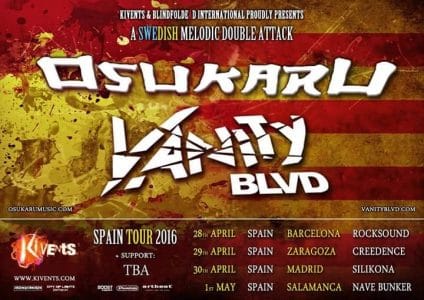 Oz Osukaru: I’ve been great friends with Anna [Savage] and the guys in Vanity Blvd for years now and I really love their material, so when an opportunity came up to do a double headliner tour in England, I immediately invited them to tag along. It turned out to be a great choice because when we announced the UK dates, a booking agency in Spain contacted me and wanted the both of us to do four shows over there as well.

Sleaze Roxx: Sweden has long been perceived as an excellent market for sleaze rock type bands. How is the Sweden market for melodic rock bands such as Osukaru?

Oz Osukaru: The market for melodic rock music in Sweden is constantly growing. What makes it extra fun nowadays is that we don’t just see new bands popping up in Stockholm but in every corner of the country — from big cities like Gothenburg, where we live to smaller cities in every direction. The impact this kind of music has on young talents over here is amazing. 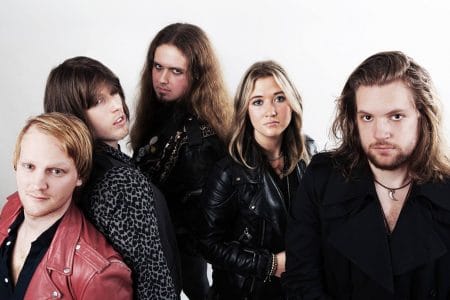 Sleaze Roxx: I got to say that although I like the band’s name, I find it a little bit deceptive in that I automatically think of a band originating from Asia such as Japan. Why did you decide to go with the name Osukaru and especially since the group originates from Sweden?

Oz Osukaru: Osukaru is Japanese for Oscar, which is my regular name, and I adopted Oz Osukaru as my stage name already back in 2004. I wanted a name that would stand out and I have always been interested in Japanese culture so when a friend of mine suggested that I should use it, I didn’t think twice about it. So when I left Eye back in early 2010, people knew me as Oz Osukaru and I wanted to continue from where I left off. Therefore, I decided to call my new band Osukaru.

Sleaze Roxx: Is there anything else that you’d like to add that we have not covered?

Oz Osukaru: Ah yes, speaking of Eye, before the new Osukaru album hits she shelves this Christmas, I am about to release my first self-titled solo album under the project name “Oz Osukaru’s Higher Place.” It’s pretty much the official continuation from where Eye left off and the music is classic, pure and melodic AOR in the veins of Bad English, Journey, Strangeways and Michael Bolton just to name a few. Please check in on the official Osukaru page on Facebook where I will announce more info soon on both coming records. And of course, thank you so much for this interview and thank you everyone who’s interested in whatever me and my gang is up to! It means the world. It really does!