Over the last 19 years Phil Varone drummed for bands such as Saigon Kick, Prunella Scales and Skid Row. Tasting success in 1992 with the #12 single “Love Is On The Way”, Phil continued his quest for the big-time till it nearly cost him his life. Phil’s struggle with the trappings of the music industry are well documented in the new DVD entitled Waking Up Dead, released June 26th through MVD Entertainment Group. Shot over a four year period of his life while drumming for Skid Row, you will see in brutally honest fashion how Phil’s hunger for everything Sex Drugs and Rock n’ Roll almost left him a music industry statistic. No longer actively touring, but occasionally doing session work, Phil has switched professions and is now enjoying a career as a comedian. In this exclusive interview, Phil discusses everything from his days as a musician, Waking Up Dead, future plans and his new career in the world of Stand Up comedy.

SR: First off, I’d like to thank you for taking the time to do this interview!! What’s going on today in L.A. for Phil Varone?

SR: Any special events planned in the coming weeks for the release of “Waking Up Dead” (www.wakingupdeadmovie.com)?

PV: Not really. We will have a release party here in L.A. at one point. For now, we are letting the movie come out and seeing how the people respond to it.

SR: For those that aren’t familiar with your background, could you give a rundown of your time with Saigon Kick?

PV: Saigon Kick was formed back in 1988 in Ft Lauderdale, Florida. We made some noise in our area that eventually landed us a recording contract with Atlantic Records in 1990. We had a hit on our second record with â€œLove is on the wayâ€ and just like clock work the band imploded and broke up not too long after.

SR: What would you consider the highlight of your time with Saigon Kick?

PV: For me, being on MTV and touring was very cool. I was young and didn’t understand much about the business end of it, so it was a learning experience as well.

SR: After the break-up of Saigon Kick, you went on to hook up with Rachel Bolan of Skid Row in Prunella Scales. How did that gig come about? Did the band ever tour behind ‘Dressing Up The Idiot’?

PV: Rachel and I were friends for a few years and he asked me to play in Prunella Scales. I had a blast in that band. We did the record at Rachel’s house in a few days and just had a bunch of fun. We did do some limited touring in Japan and then I left the music business for the first time and bought a restaurant. That ended up being a bad move. You live and learn I guess.

SR: There has been talk over the years of another Prunella Scales CD, is there any chance of it and would you be involved?

PV: I don’t see myself involved in that. I’m not in music mode these days.

SR: You’ve remained friends with Matt Kramer (vocalist of Saigon Kick), even reforming Saigon Kick for a short time as well as writing and recording together for each others projects (Phil’s Waking Up Dead Film Score and Soundtrack and for Matt’s “War & Peas” CD)….any chance of future collaborations or a new band?

PV: Matt is one of my best friends. He is also one of the most talented people I know. I just don’t want to do music anymore. It was a cool time in my life and now I have moved on. Maybe one day I might play again, but for now, no desire.

SR: Few may know but you had a project called “Lithium”, what ever came of the band/demos?

PV: That band went through a ton of member changes and eventually broke up. It’s too bad. It was a great band with great songs!

SR: How did you land the gig with Skid Row in 2000? Besides your previous association with Rachel in Prunella Scales, were you friends with the guys before the gig?

PV: I met the Skids back in 1990. They did the Slave To The Grind record in Florida with Michael Wagner. He produced Saigon Kick’s first record. We all became fast friends.

SR: For those that have seen the DVD “Under The Skin: Making of Skid Row’s Thickskin”, it is obvious that the band had incredible chemistry as a band unlike past incarnations of Skid Row….what were some of the highlights of your tenure in Skid Row?

PV: Pretty much the whole thing. I had an amazing time. The touring was insane, I was playing with my good friends and living the rock and roll dream. I got to do things that I could never do playing with Saigon Kick. Unfortunately I got into a downward spiral with drugs and abusing myself and missed out on a lot.

SR: You had left Skid Row in 2004 to take care of personal issues that were documented in “Waking Up Dead” but later returned, what lead to your return to the band and your re-departure?

PV: Well, I left the band to get cleaned up and healthy. They got a new drummer to do some touring and the guy sucked so bad they called me to come back and finish the tour they started. Because they were my friends I wasn’t going to leave them hanging. The problem was I just got out of rehab and touring was very tough. I agreed to do the following tour in Europe, but that was all I could take. I really needed to get my shit together.

SR: It’s been well documented that there is/was a rift between Rachel Bolan and yourself due to some unkind things Rachel said of you after the last time you left Skid Row. Have amends been made? If not, if they ever were would you ever consider re-joining the band if the drum spot came open again?

PV: Rachel and I have been friends for 17 years. I love him like a brother and just like any relationship you deal with road bumps. I look forward to having our friendship repaired and being back to the way it was. Time heals all. I would love to do some gigs with the Skids. I miss those guys a lot.

SR: Anyone who is a fan of you knows you do an dead-on impersonation of Sammy Davis Jr., have you ever considered doing a tribute album/DVD to him?

PV: That would be fun!

SR: On July 26, 2003, I had the privilege of hanging out with you and the Skid Row guys at Lake Afton Park outside Wichita KS on your tour stop for Wheatland Jam 2003. There were cameras rolling that day by several people, was any of the footage from that day included in Waking Up Dead? Any recollections of that tour stop?

PV: Honestly, I have no idea. I don’t remember that at all. That is one of the problems with being fucked up all the time.

SR: Your movie, Waking Up Dead, will be released on DVD on June 26th, for those who are curious about this release, give them the history behind it and what can they expect from it?

PV: The movie covers my life before, during and after music. It was filmed over 4 years while I was playing with Skid Row. Along with that footage, I have my personal footage and pictures to document what I went through to achieve my goal of being a rock star.

SR: Where will the DVD be made available?

PV: In stores all over. For now, amazon.com, bestbuy.com, etc. We ask for everyone to go into the local video stores and ask for it..

SR: I’d been aware of Waking Up Dead since early 2005, why the 2 1/2 year delay in its release after the highly successful Film Festival run it had?

PV: We had to find the right company to put it out. The process takes a while to say the least. We are happy to finally have it available.

SR: How did it feel to have your movie featured at the Tribeca Film Festival/Cinemas?

PV: That was huge!!! That place is the coolest and legendary. It was an exciting night for me.

SR: Over the last year you’ve begun a highly praised comedy career in Hollywood. Do you still do any session or band work? If so, any projects you would care to plug?

PV: The only project I did was for a good friend of mine named Cody Marks. She is a great artist and asked me to play on her new record. I had so much fun just playing with no pressure of a band. We recorded at the Village in Santa Monica. That place is where legends recorded.. Very cool..

SR: As evidenced by your appearance in the Skid Row DVD or by anyone who has ever been around you, comedy seems to be a natural for you. When and how did you decide to move to L.A. to pursue standup? 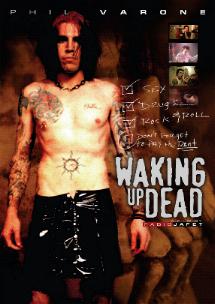 PV: I have always loved comedy and my friends said I should be a comedian. Then again, that’s like people telling their friends to try out for American Idol because they sing good in the shower. I have to say, it’s tough. A lot tougher then I ever thought. I have so much respect for comics. I’ve been doing comedy for a year now and I’m a baby at it.. Just imagine starting to play an instrument . After a year, how much could you really know? I’m having a blast trying to figure it all out..

SR: Were you a fan of stand up comedy before entering into it?

SR: Who were some of your influences/heroes?

SR: What could someone who is not familiar with you expect when they see your show, “Sex Stand Up and Rock n’ Roll”?

SR: Any chance of taking the show on the road across the country?

PV: Yes.. Working on that now.

SR: Have you been approached to film your act for a CD or DVD release or would you prefer not to explore that?

PV: I’m no where ready to film my stand up. Maybe in a few years.

SR: Was it a difficult transition from the music business to comedy or are their similarities between the two?

PV: In a band, you have fans that come out to see your show and listen to songs they love. In comedy, it’s just me vs. microphone and the people want to hear you be funny. If you’re not funny, they can care less who you are.

SR: What is your craziest or sickest road story you’d care to share?

PV: Well , the mother daughter sex team is always fun.. I had a few of those on tour.. Pretty wild. I’m still going to therapy for that!!!!

SR: Have you left the idea of touring/recording in rock bands behind to fully pursue Stand Up or would you consider joining another band given the opportunity was right?

PV: I have no desire to join a band. I would do a few shows here and there, but never join. I have moved on and loving comedy and writing. Actually, I would play drums for Britney Spears.. I love her..

SR: Are there any other projects you have in store that you’d like to announce or talk about?

PV: I’m planning on doing a college speaking tour to promote my movie and make kids aware of what’s out there. I hope to help others..

SR: Finally, let everyone know where they can check up on you at or when the can catch your “Sex Stand Up and Rock n’ Roll” show?

PV: Always check my myspace page for show schedule. I do it in L.A. right now at the Hollywood, IMPROV (www.improv.com).

Thanks to Phil Varone and Justin “Crash” Crafton