Pretty Maids frontman Ronnie Atkins spoke to Sleaze Roxx as the Danish rockers are currently promoting their newly released [May 22nd] live CD/DVD/Blu-Ray titled ‘Maid In Japan’ on Frontiers Records. As noted, it was filmed in Japan and the performance documents the celebration of their 1987 fan favorite album ‘Future World.’ In addition to the concert, the band has included a handful of hits at the end of the show, and there’s interviews and video clips. As Atkins suggests, “I think ‘Future World’ IS the album that put us on the map.” He’s not wrong, It’s an album that merges the New Wave of British Heavy Metal, Classic Rock and Album Oriented Rock into one collection of songs. This didn’t end with ‘Future World.’ The band continues to release studio albums and although they lean heavier toward Album Oriented Rock, they’re still worth checking out. Sleaze Roxx: I can’t tell you how much I love ‘Future World’ so to get a live album of it performed in its entirety is a real treat. The live CD/DVD/Blu-Ray is titled ‘Maid In Japan.’ Is that a nod to [Deep] Purple?

Ronnie Atkins: [Laughs] You can say that it is. We love Purple, but it’s also a play on words. We used ‘Maid’ in the title. Like you eluded, ‘Made In Japan’ is such a classic live rock record.

Sleaze Roxx: Why Japan over Denmark?

Ronnie Atkins: Well, we’ve never done anything in Japan — no videos, live recordings or anything like that. It seemed like the right place to record it. We talked about recording in Denmark, but it was too late to do it by that point. ‘Future World’ is a milestone in our career and it’s the best selling [album from Pretty Maids] and a beloved album by our fans. The album brought in more fans from our native country, which made us proud. I’ll be honest with you, Denmark isn’t a big country for heavy metal, or wasn’t so back then. Japan, Germany, Spain and Sweden have been the places where Pretty Maids does really well.

Sleaze Roxx: What kind of planning did you have to do to make that album happen? Was it a stand alone gig or part of a festival?

Ronnie Atkins: We did a couple of shows in Japan in December of 2017. We do annual Christmas gigs in Scandinavia, which we’ve been doing for the last 10 years. During that time, we decided to do something a little different. We decided to perform the ‘Future World’ album in its entirety. So the Japanese promoters found out about it and were excited about us doing this in Japan, so we did [laughs]! So when we performed the album in Japan in 2018, by that time it was the 31st anniversary of ‘Future World.’

Sleaze Roxx: How tasking was it for you to relearn the songs on ‘Future World’ in preparation for this live recording? 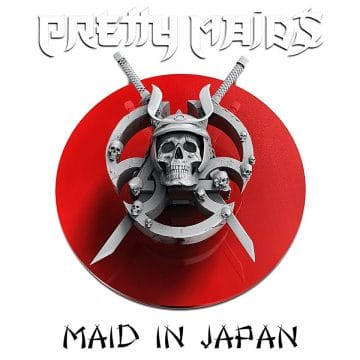 Ronnie Atkins: It came pretty naturally. Most of these songs, as I said, it’s our most ‘popular’ album. We’ve had a number of the songs in our set for years. We have had songs like, “Future World,” “Love Games,” “Rodeo” [and] “Yellow Rain.” We’ve played them so many times over the years. There was one song that we hadn’t played before. The song was “Long Way To Go.” There were songs that we hadn’t played in ages like “Loud And Proud.” There were two to three songs that we really had to rehearse. I actually had to find them on the internet to find the lyrics [laughs]!  Aside from that, we’ve played the majority of the songs at one time or another in the set. I have to say that we play them in the same key, just like we did back then.

Sleaze Roxx: You can’t go wrong with that one.

Ronnie Atkins: I would absolutely have to agree with you. That’s the song… I might be fed up performing “Love Games,” but it works so well live! “Future World” is the best, if not one of the best Pretty Maids songs ever. It’s definitely our best song from that era. I think that song really showed people what Pretty Maids is all about and I love performing that song live until this day. It was a great record for what it was at the time. We were 21, 22 years old when we recorded it. That album is great. I think had we not done that album, I don’t think we would be around today. Like I said earlier, it’s our best selling album to date. I think we have matured and improved as songwriters over the years. I would encourage the readers to look up some of the records we have done in the past 10 years. I’m very proud of the work we have done. ‘Future World’ and the album before — ‘Red Hot And Heavy’ — are defining albums for us. That is where we found our sound and style, so to speak.

Sleaze Roxx: Pretty Maids is a great power ballad band. What I mean by that is that your ballads are just as loved by the fans as the rockers.

Ronnie Atkins: Well, thank you. I think we’ve alway been a bit of both. I think a good song is a good song. We grew up with the New Wave of British Heavy Metal and bands like Judas Priest, Iron Maiden and of course, there were bands like [Led] Zeppelin, [Black] Sabbath, [Deep] Purple and Thin Lizzy, but we also listened to bands like Journey, Foreigner and AOR bands, which why I say that we’re a bit of both. I’m also a huge fan of The Beatles, The Bee Gees and stuff like that. A good song is a good song. It’s the package and how you produce it. A lot of our songs were written on two acoustic guitars. There are times where the songs are ‘pure pop,’ but we turn it into something for the ‘hard rock’ audience, so to speak.

Sleaze Roxx: Like you mentioned previously, you were relatively young when you went into the studio to cut ‘Future World.’ You had Eddie Kramer on board for the production of the album. What happened because he didn’t finish the record? 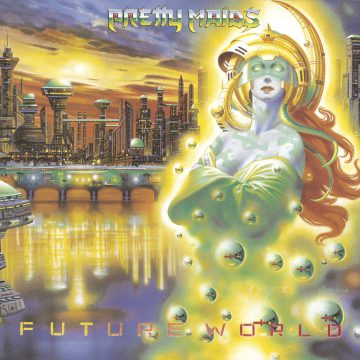 Ronnie Atkins: We were thrilled to be working with Eddie. He had worked with Jimi Hendrix and KISS. He had worked with this little band called The Beatles. He worked with them all! It was actually an American band that he worked with called Icon. Particularly the album titled ‘The Night of The Crime,’ which came out in 1985, was the reason why we chose him. We wanted an American or British producer work with us. We were able to get Eddie and in hindsight, it was fucking amazing! He’s a legend! It was the record company that ‘sacked’ him during the recording process…

Then we got Flemming Rasmussen who had worked with Metallica to work on the heavier tracks on the album and Kevin Elson who has worked with Journey, stepped in to work on the more ‘commercial’ songs on the album. That was a move by the label. At the time, Europe was hitting in America with ‘The Final Countdown.’ We were on the same label so they thought they needed another band that could get that level of success in America. They wanted to sell records and that appealed to us. Eddie got a little lost along the way. He was a very nice guy. It just took too long and things just got fucked up. He was fun to work with and I have some good memories of working with him. In the end, the record company lost their patience and they ‘sacked’ him!

Sleaze Roxx: How concerned were you when Eddie was fired? Here you are working on a record with a guy who you admired and then he’s gone…

Ronnie Atkins: We didn’t think too much into things back then. We just wanted to move forward with the album. Looking back at the contracts that we signed around that time, it didn’t appear like we didn’t put too much thought on things in general [laughs]! We just wanted to get the album done, but it did to a point where we were like, “Wow, this is taking a lot of time.” We ended up being in America for about four months and we were supposed to be there for like six weeks [laughs]! We recorded the album in Woodstock, in upstate New York at Bearsville. The recording just seemed to have taken ages [laughs]! Looking back, it was a great time for me. It was my first time in America, I just have a lot of fond memories of that time. It was a killer time man. I 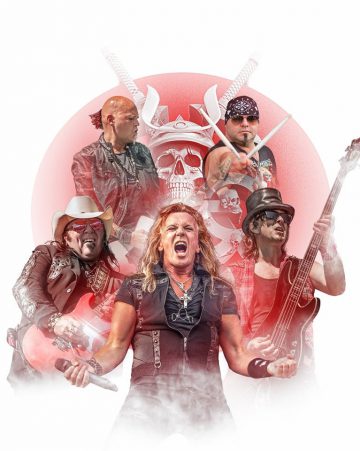 wish I could go back. My memory on the exact reason why he got sacked is a little blurred, but it was because it took too much time. It was getting very expensive. I don’t have any hard feelings against Eddie Kramer at all.

Sleaze Roxx: What’s a memory that you feel comfortable sharing about working with Eddie?

Ronnie Atkins: [Laughs] Yeah… [Laughs] I have a few actually but let me see… I don’t recall how old he was back then. He was probably 50 or something? I used to do vocals at night. When I did vocals, I’d be in a vocal booth. I remember one night I had sang something and I said “Hey Eddie, how was that?” He was falling asleep over the mixing console. I must have given a very boring impression of the song that I was doing or he was just tired or something. I must have startled him because he answers back, “It was great Ronnie! It was great Ronnie! Do you think you could go in there and do it again?” I said, “Sure.” I think he forgot to push the record button [laughs]! He was a good English gentleman and a great cook [laughs]! He is a master at the barbeque!

Sleaze Roxx: Last thing, I just saw the video you cut for the At The Movies project where classic ’80s soundtrack sounds are getting the metal treatment. You just sang on “We Don’t Need Another Hero” from the ‘Mad Max Beyond Thunderdome’ movie. Were you a fan of the song?

Ronnie Atkins: First of all, that song is the best thing for us to say about that movie [bursts into laughter]! The first two movies are great. I’m not a fan of ‘Thunderdome.’ I loved that song! I’m a child of the ’80s. I grew up in that era. It brings back great memories. That was our ‘heyday.’ That is a project by our keyboard / guitar player Chris Laney. He’s the brainchild behind At The Movies. There’s former members from Pretty Maids, members of King Diamond, Atherion, Hammerfall. They had asked me for a while to be a part of it for a long time. I had cancer and had part of my lung removed. Up until a couple of months ago, I wasn’t sure I’d be able to sing again. So, finally I said “Yes.” I’d do it, so I took a crack at it. I went to the studio with our producer Jacob Hansen. I did the song in a couple of takes. It was such a great relief that I could still sing. That’s one of the reasons why I did it. I wanted to see if I could [do it]. I think that version turned out great and we have Bruce Kulick on guitar. It turned out really fucking good! Go check out some of the other stuff they’ve done, I’m sure you’ll love it

At The Movies’ “We Don’t Need Another Hero” video (from Mad Max Beyond Thunderdome):