NASHVILLE PUSSY RELEASED A HITS COMPILATION THAT SPANS THE LAST DECADE VIA THEIR CURRENT LABEL SPV/USA TITLED ‘TEN YEARS OF PUSSY’. NASHVILLE PUSSY WILL TOUR NORTH AMERICA THIS FALL WITH VALIENT THORR IN TOW. AS YOU ALREADY LIKELY KNOW, NASHVILLE PUSSY ARE ONE OF THE MOST UNDERRATED, EXPLOSIVE AND ENERGETIC ACTS OUT THERE RIGHT NOW. YOU MIGHT BE WONDERING IF THE BAND HAS BEEN WORKING ON NEW MATERIAL. LEAD GUITARIST RUYTER SUYS ADVISED THAT: “WE’VE BEGUN TO WRITE FOR THE NEXT ALBUM. WE HAVE IDEAS BUT HAVEN’T RECORDED ANYTHING YET.” I CAUGHT UP WITH SUYS FOR A BIT OF AN UNCONVENTIONAL INTERVIEW. IN THE PAST, WE’VE CONCENTRATED ON THE ALBUM OR THE TOUR. THIS TIME AROUND, IT WAS MOSTLY GETTING TO KNOW SUYS A LITTLE BIT.

Sleaze Roxx: I think when bands issue a new album, they always say “this is the best thing we’ve done — ever”. I think that I can really say that about ‘Up The Dosage’. It is an incredibly fun record with the best material I’ve heard from Nashville Pussy to date.

Ruyter Suys: Thank you. ‘Up The Dosage’ did very well in Europe but America should be slapped upside the head! That album should have done better here. ‘Up The Dosage’ should have fared better in America but due to lack of press and distribution by our record label, it did not. SPV are big in Europe but they’re pretty insignificant here. ‘Up The Dosage’ was fucking fantastic! Everyone that heard that record thought that we were going to get a Grammy nomination out of it. I did somewhere in the area of 100 interviews for the European press and I did like 20 for North America. 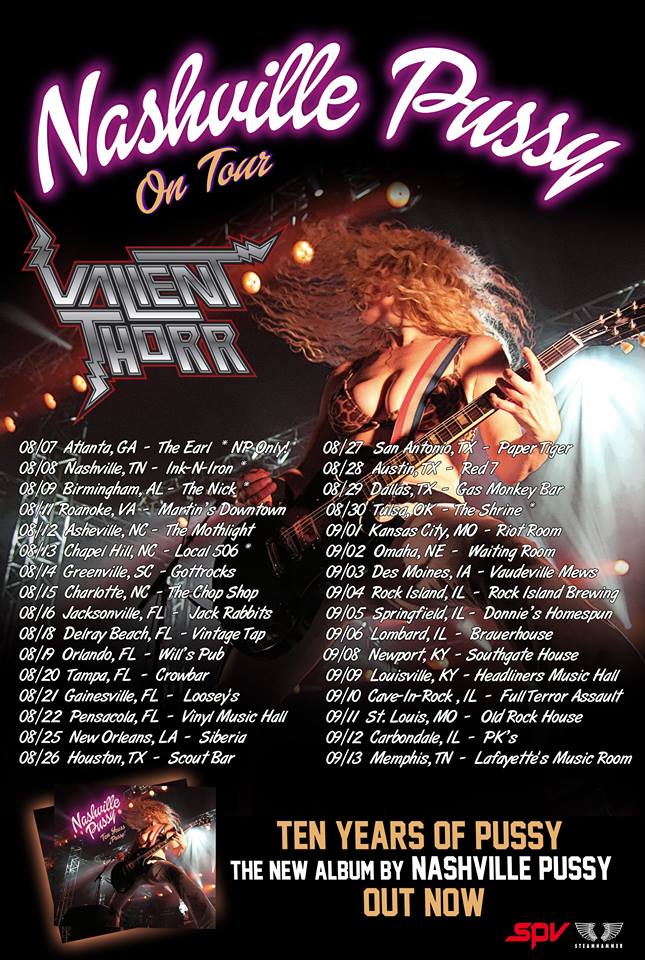 Sleaze Roxx: I love the artwork and packaging for the ‘Ten Years of Pussy’ compilation. It immediately makes me think of Ted Nugent. It’s wonderful and would look great on a t-shirt.

Ruyter Suys: That’s an incredible album cover! While I don’t have credit on that, I was the art director on that one! Every decision on that was mine and I made a conscious to make that the best it could be. That photo that made the cover has been floating around in our archives for a while and it’s from a Swiss guitar festival that we played several years ago. I’ve shown that to people a lot over the years. It’s a picture of me at work (laughs)! You’re right! It does scream Ted Nugent. I gave the artist a couple of Ted Nugent album covers to reference and give it the same effect. He fucking nailed it (laughs)!

Sleaze Roxx: Did you think twice about using that photo for this compilation and use it instead for the next studio effort?

Ruyter Suys: (Laughs) I don’t know man. We have a lot of other great photos in our archives. Actually, no. We never think of the ‘next thing’. We only think about the ‘current thing’ that we’ve doing right now. That might have been a good idea though (laughs)!

Sleaze Roxx: You think social media helped the music industry or do you think it will ultimately lead to its demise?

Ruyter Suys: I really think that it has helped save it. I think it’s helped in more ways than the music industry in terms of being able to reach the band’s audience. You’re closer to the fans like that. It’s interactive. It’s fun. It’s silly. I think it captures the true spirit of music, which is fun — it should be fun.

Sleaze Roxx: Which do you prefer and why? Black Sabbath or Black Oak Arkansas?

Ruyter Suys: (Laughs) Oh, my God! Are you serious? That’s hard! Seriously?! I mean ‘Sabbath Bloody Sabbath’ is one of my all-time favorite albums. I can listen to that record all day. We just did a cover of Black Oak Arkansas’ “Jim Dandy” on a cover album, which hasn’t been released yet. We play on it on three songs but on “Jim Dandy”, I play guitar and sing the Nancy’s part and Jello Biafra sings the Jim Dandy part. It’s was incredibly fun! So I think right now, I’d say Black Oak Arkansas.

Sleaze Roxx: Which do you prefer and why? Led Zeppelin or Lynyrd Skynyrd?

Ruyter Suys: Damn! This is cruel and unusual punishment! Jesus! Okay, Led Zeppelin is my favorite band and I absolutely adore Jimmy Page. Man, Skynyrd — they wrote one of the of my favorite songs that helped define me as a musician. I love “Tuesday’s Gone.” I remember a neighbor used to come over and we’d listen to Skynyrd — I have a lot of great memories. Later as you know, we got a chance to open for Skynyrd which was a dream come true for us. If I can only choose one, I’d have to say Led Zeppelin.

Sleaze Roxx: Which do you prefer and why? Deep Purple or Molly Hatchet?

Sleaze Roxx: Which do you prefer and why? Thin Lizzy or ZZ Top?

Ruyter Suys: Without any doubt, ZZ Top! Don’t get me wrong. I love Thin Lizzy but they didn’t have the catalog that ZZ Top has in my opinion. I think I got burned out on Thin Lizzy from touring with Motorhead and The Supersuckers who listened to a lot of Thin Lizzy. It’s funny, one day at sound check — in Seattle I believe — Motorhead was playing “Rosalie.” You know that song was originally recorded by Bob Seger and Thin Lizzy covered it later. We were watching them sound check when they finished I said “I fucking love that song!” Lemmy said “Right on we love Thin Lizzy too.” I said “What?! That’s a Bob Seger song that Phil covered!” Needless to say that led to a huge debate during their sound check (laughs).

Sleaze Roxx: What are five records that you’d select if you were to be stranded on an island?

Sleaze Roxx: What’s a particular piece of equipment, gear or instrument that you can’t live without that isn’t a guitar and why?

Ruyter Suys: My piano. I don’t think very many people know this but I try to play my piano everyday. I wrote “Rub It To Death” from our last record on piano if you can believe that. Getting back to Deep Purple, the song sounded like one of their songs in the working stages.

Sleaze Roxx: What are two mandatory touring staples that you require?

Sleaze Roxx: Describe your bandmates with one word. Let’s start with Blaine.

Sleaze Roxx: What is some essential reading for you?

Ruyter Suys: I love reading Classic Rock Magazine. That’s a great magazine. They really support rock music. I also read Mojo Magazine when I can get a copy.