SWEDEN CONTINUES TO BE WHAT SEEMS TO BE THE MAIN COUNTRY FOR GREAT BANDS TO EMANATE FROM. ABOUT A YEAR AGO, I STUMBLED UPON THE SPIDERS’ 2014 ALBUM ‘SHAKE ELECTRIC’ AND FELL IN LOVE WITH THE BAND’S ’70S RETRO YET MODERN SOUND. I GOT THE OPPORTUNITY TO INTERVIEW ALL FOUR MEMBERS OF THE SPIDERS AS THE BAND JUST RELEASED A VERY GOOD NEW EP CALLED ‘WHY DON’T YOU’ AND GETS SET FOR ITS FIRST TOUR OF THE USA IN THE NEW YEAR.

Sleaze Roxx: What prompted you to release a three song EP at this juncture in time?

Ann-Sofie Hoyles: We had written two songs already — “Why Don’t You” and “Sitting In A Room” when our drummer’s [Ricard Harryson] girlfriend Hanna showed us “Watch Out” with ABBA and we felt that we really wanted to play that song. We thought that the three songs were great together and decided to record them and release them as quick as possible. While we waited for the EP to be done at the pressing plant, we got a request for a great tour — six weeks in Europe with Uncle Acid And The Deadbeats which is going on right as we are doing this interview so that’s great to have a new EP out now! 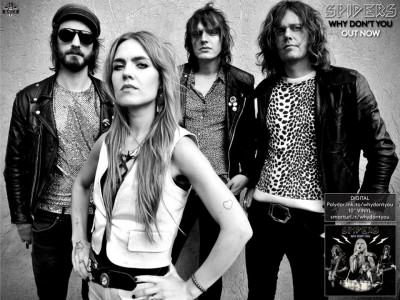 Sleaze Roxx: Why did you cover ABBA’s song “Watch out” for the EP?

Ann-Sofie Hoyes: Spiders has always liked to play covers. I think it’s a great way to honour bands and artists you like. We have played “She” by the Misfits, “Under My Wheels” by Alice Cooper, “Never Say Die” by Black Sabbath-Never Say Die and “Lies” by the Strollers and many more! Almost everybody knows the famous songs by ABBA, such as “Dancing Queen,” “Money, Money, Money” and “Waterloo” but in the same album as ‘Waterloo,’ you can find this fantastic song “Watch Out.” Not so many people have heard it so when Hanna [Ricard Harryson’s girlfriend] played it to us, we all felt that we had to play that song! And also share it with people who haven’t heard it!

Sleaze Roxx: I find that if someone was not aware that “Watch Out” was an ABBA song, you’d think that it was an original Spiders song because you have really put your own stamp on that song. Do you agree and why?

Ann-Sofie Hoyes: Thank you [laughs]. I take that as a compliment! We have talked a lot about this in the band and we all feel that it doesn’t matter what kind of song a band is playing, if it’s a cover or if you mix a genre or whatever, if you have your own style and sound. If you have that, people can always hear it’s you or your band, so if that’s what Spiders does, we have succeeded in what we have aiming for! 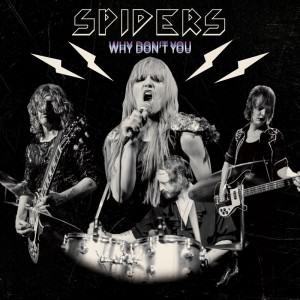 Sleaze Roxx: I find that ‘Shake Electric’ and ‘Why Don’t You’ both offer songs with a real retro ’70s sound and vibe but with a modern sound and feel to them. Do you agree and why?

Ricard Harryson: I agree! Glad you noticed that. We listen to all kinds of music, from all [the back in] time. Listening to great music is a great inspiration for making new songs, of course. Even though it’s mostly old stuff, recorded way back. But we’re living right here, right now and don’t wan’t to copy what’s already been done. It could sound a bit pretentious but we’re always trying to do something timeless, and undefined. I listened to Creedence [Clearwater Revival] the other day, and it struck me what a good, timeless and undefined band it is! That’s what we’re aiming for!

Sleaze Roxx: The Spiders have a long standing connection and relationship with Graveyard having toured with them a number of times including some upcoming US tour dates and Spiders’ former drummer Axel Sjöberg going on to work with Graveyard. Is it fair to say that the Spiders are closest with Graveyard among their contemporaries and what makes the two bands work so well together?

Ricard Harryson: John [Hoyles] and Axel started Spiders in 2010, when Axel already played in Graveyard. When Graveyard took off, he didn’t have the time for keep on drumming in Spiders. But he’s kept his interest in the band, asking how things are going, and helping us with loads of stuff. He is truly the greatest guy. We’ve been friends with Graveyard for a long time, done a couple of gigs and a European tour. Graveyard aren’t trying to be a timeless band – they ARE timeless and undefined, just like Creedence. And that’s why they are so good, in my opinion. And that’s why we go so well together. 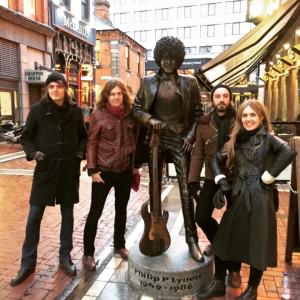 Sleaze Roxx: You are about to embark on what appears to be your first US tour in the new year. Did you ever expect to make it out to North America when you first started and what are you looking forward to the most during the upcoming US tour?

Ricard Harryson: We’ve been trying to go to the States for a long time, and now we’re finally going! We never expect anything. We work extremely hard — like a thousand other bands do — and hope for the best. When you’re in this, you can’t take anything for granted. If you do, you won’t last long. You live on hope, and hard work. That’s what took us across the Atlantic! It couldn’t have been a better match, going with Graveyard. We all know each other well and have played together before. Driving around the US, playing great venues and having a wonderful time with your friends — that’s what we’re looking forward to the most!

Sleaze Roxx: The Spiders seem to have a sound that allows them to be included on bills involving a wider spectrum of music than other bands. Do you agree and why?

Olle Griphammar: Yes, you’re right! Basically, it’s because we listen to a lot of different music, from the early 1900’s to the 20th century, which turns into Spiders songs in the end. Little Richard, Etta James and GG Allin can all be heard in Spiders material, and that’s one of the reasons I guess. We also like to explore new angles and sounds when we’re in the studio. For example, we’re not necessarily looking for a “vintage sound” just because. It’s more interesting finding sounds that suit the songs, and then it doesn’t matter if it sounds like we recorded it in the ’50s, ’70s or in November 2015. That’s also a reason why we have a pretty wide spectrum in our sound. 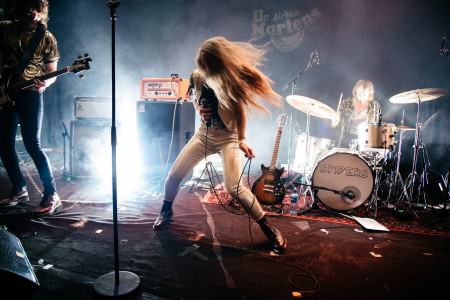 Sleaze Roxx: When can we expect another full length album from the band?

Olle Griphammar: Later next year! We already have a whole bunch of great ideas for the new album, so we are gonna get down in the cave after the upcoming US tour and make something out of them. It feels so fun to start the work with a new full length album, especially for me since it will be the first one I record with Spiders. I wrote a lot of songs in my former band Deadheads, so I’m looking forward to contribute to the song writing for the next album. The work with the new EP felt great, and I guess the process with the new album is going to be even better.

Sleaze Roxx: Aside from the upcoming US tour and new album, are there any other plans for the future?

John Hoyles: We have been booked for a few festivals next year and probably do some short tours around them. It’s great being out on the road. One gets to see a lot, meet cool people and play the music one loves. But I think most of next year will be [spent] writing and recording our future album.

Sleaze Roxx: Is there anything that we have not covered that you would like to mention to Sleaze Roxx readers?

John Hoyles: Not really, just check out our new EP ‘Why Don’t You.’ Hope you like it!

Sleaze Roxx: Last question for each of you — what are your three all-time favorite albums and why?

John Hoyles: Zipper! It’s a band from Portland, Oregon [USA] that recorded one album in 1974. Fred Cole from Deadmoon sings and it’s like Led Zeppelin meets The Stooges. It’s so good! Parish Hall [are] a US band that also released one album in 1970. One of my favorites. Very blues based with a great guitarist called Eric Wagner who is very underrated. Also Ron Asheton’s New Order. Ron Asheton from The Stooges put a band together with Dennis Thompson from the Mc5. They never released a album but there are loads of demos and rehearsal recordings that are around. I’m a big fan of The Stooges and the Mc5, and New Order is mind-blowing. Two of my favorite songs are “Rock N Roll Soldiers” and “Sold For Cash Girl.” Check it out!

Olle Harryman: Slayer’s ‘Reign In Blood.’ Half an hour of pure energy. The production, the guitars, the drums, the songs — all perfect. Also, the Sex Pistols’ ‘Never Mind The Bollocks.’ I found it in my mom’s record collection when I was a kid, and I couldn’t stop listening to it. It’s the main reason why I started to play music at all. It’s a masterpiece! Finally, the Rolling Stones’ ‘Goats Head Soup.’ As the Rolling Stones fan that I am, I could have picked any of their records around 1970. This record is quite underrated I think, and one of my favourites. Excellent songs and Mick Taylor at his peak. Terrific album! 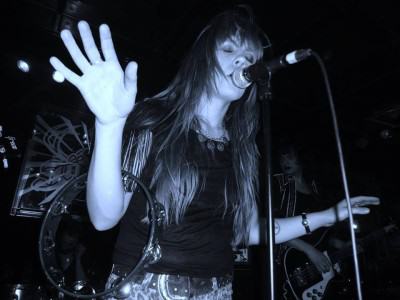 Ann-Sofie Hoyes: Alice Cooper’s ‘Love It To Death’ is my absolute favorite album with Mr. Cooper. Every song on this album is great! I played it at all my home parties I believe [laughs]!

Sleaze Roxx: I love that one too!

Ann-Sofie Hoyes: The Rolling Stones’ ‘Exile On Mainstreet.’ Do I have to explain why? LISTEN! The coolest band in the world! OK, KISS is really cool too but I can’t choose one album from them. Elvis Costello’s ‘My Aim Is True.’ This is a really great album — so well produced. It’s like velvet for your ears. His voice is really good and “I’m Not Angry” is one of my favorite songs.

Ricard Harryson: Thin Lizzy’s ‘Johnny The Fox.’ I love Thin Lizzy and this is one of my favorite records. The sound is impeccable and I like the mix of songs on this one. Brian Downey is a huge inspiration. Heart’s ‘Little Queen.’ I discovered this band rather late. Now I listen to at least two Heart song every week. The Wilson sisters are incredible! Such great songwriting. Love the voice, love the guitar. Black Flag’s ‘Nervous Breakdown’ EP. When I heard this record, I knew what I wanted to do with my life. I was just a teenager but it all just fell to pieces. One of the best records of all time!

Thank you very much to Jon Freeman of Freeman Promotions for coordinating the interview.