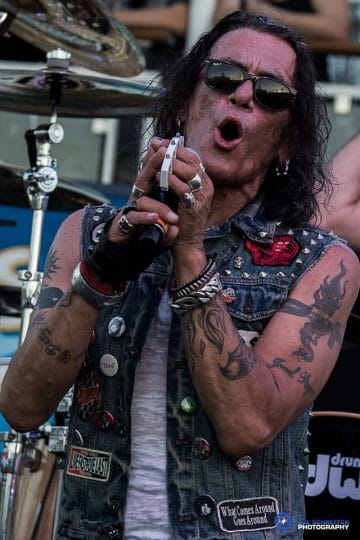 HOLMES, AND GUITARISTS JORDAN ZIFF AND CHRIS SANDERS, HAVE RECENTLY EMBARKED ON THEIR ‘IN YOUR DIRECTION TOUR 2019-20’ AFTER A RATHER QUIET LAST SIX TO EIGHT MONTHS FOLLOWING PEARCY’S STRUGGLES WITH SOME KNEE ISSUES. SLEAZE ROXX CAUGHT UP WITH PEARCY TO FIND OUT RATT’S CURRENT STATUS AND FUTURE PLANS.

Sleaze Roxx: Ratt just started the ‘In Your Direction Tour’ and it states that the tour is going from 2019 all the way to 2020. So what countries are you planning on covering? Is it just America or are you going past that?

Stephen Pearcy: No. As a matter of fact, it’s like we’re waiting impatiently also. We’re kind of using 2019 to get the feet wet, get back on track after my surgeries. Put more songs together. We plan on playing everywhere we possibly can — Japan, Canada — I believe that we have a show out there [Hair In The Fair Festival in Welland, Ontario, Canada on July 11, 2019] — Europe, Brazil. We just did Mexico [Domination Festival in Mexico on May 4, 2019]. We just want to really get out there and hit some markets we haven’t been in many years.

Ratt performing “Lack of Communication” live at the Domination Festival in Mexico City, Mexico on May 4, 2019:

Sleaze Roxx: Cool! Well, that’s exciting! In terms of your health, you had knee surgery I believe at the end of December [2018] /early January [2019]. How’s your knee feeling now?

Stephen Pearcy: It’s coming along. Like I said, we went out and did a few shows to see how everything was going to go down and it went down pretty well. I actually had two surgeries on one knee and surgery on the other one. It was more complicated than anticipated but anyways, we’re firing on all cylinders and want to go out there and shake it up for the rest of 2019 and get out 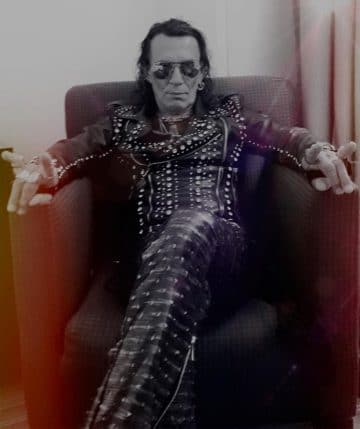 there for — I believe that it would be the 36th year anniversary of [the album ‘Out of The] Cellar’ or something. ‘Out of The Cellar.’ We want to stay out there.

Stephen Pearcy: I have no regrets [laughs].

Stephen Pearcy: No regrets! No regrets! Shit happens! And you know, I should have known better but hey, I was calling myself out, “Yeah. You can do these shows. Don’t worry about it.” To be honest, after that last show, I couldn’t even walk. I was in the hospital later.

Stephen Pearcy: I was pushing it when I didn’t need to be pushing it. It put me in a negative situation but that’s over. Next. Move ahead.

Sleaze Roxx: Now in the meantime, you released a really good solo album ‘View To A Thrill‘ but it didn’t really seem to get the push because you were out of commission. Is there any plans…

Stephen Pearcy: Yeah, it had a lot more to do with the label [Frontiers Music Srl] seemingly drop the ball and I’m not one to sit around and wonder why, who, what, where. I’ll just get it back and re-release it. Maybe put out another solo record within a year. Right now, we are concentrating on a couple of new Ratt songs for next year and a video and some other things. So you know, we have a lot to accomplish here.

Stephen Pearcy‘s “U Only Live Twice” song (from View To A Thrill):

Stephen Pearcy: Ummm. Well, first, it’s going to be Juan [Croucier] and myself. You know, “Lack of Communication”, “You’re In Love” and all these other songs that we co-wrote together so we’re going to try along those veins for songwriting. And we’ll see what happens. I have plenty of ideas. Juan’s got plenty of ideas and we’ll see what the other guys have to offer down the line.

Sleaze Roxx: Speaking of the new line-up, how did you get Pete [Holmes], Jordan [Ziff] and Chris [Sanders] in the band? Did they have to audition? How did it work? 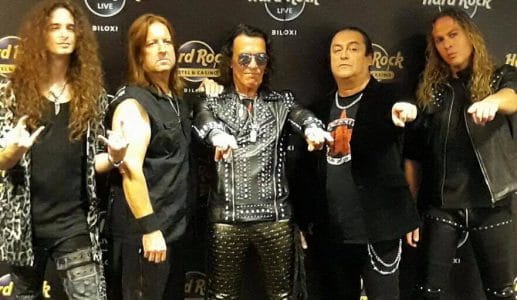 Stephen Pearcy: Yeah, of course. We auditioned quite a few players. Tried to keep it on the down lo. We knew that the minute that we started auditioning, the word would be out there. Pete came from Black ‘N Blue and he was playing with Juan’s solo band, and when we were doing rehearsals, he was sitting in for us. I just loved his playing. You know, it was just thunderous and that took care of that. And then we auditioned guitar players, had them come back a second time and possibly a third time and then we go with what feels good and the persons themselves. You know, this is going to be a long haul for the next few years at least. Keep things moving. We had to find the right soldiers for the job.

Sleaze Roxx: [Laughs] Fair enough. What’s the status for Warren DeMartini? Is he still part of the Ratt partnership or is he completely out of the band?

Stephen Pearcy: [Pause] No. Those two gentlemen are completely dismissed and without going into anything, it’s all public record. You know, it’s another thing. We pretty much want to get back is some of the integrity of the band from everybody and move ahead. So we don’t dwell on that much. Everything is well, done and over. It’s over. If people really don’t want to play or have a negative take on everything, it’s not too helpful to the brand you know. So without going into it any further, we’re happy with who we have now. Fortunately, we’re not the most dysfunctional band in the planet.

Stephen Pearcy: [Laughs] I mean, you’ve got [Judas] Priest out there with Rob [Halford] and the bass player [Ian Hill. You’ve got this band with that. When I go out, it’s the original Ratt. You know, once Robbin [Crosby] — rest in peace — I knew that it would never be the same. All you can do is give it the best you got. I think a little bit different than those people about situations because I am in it. You know, we just want to keep… Get some integrity and some real Ratt N’ Roll going again. It has to be a positive venture. It can’t just be negative, negative or else you’re not firing on all pistons and you’ll lose the race.

Sleaze Roxx: Speaking of Robbin [Crosby], it seems that when he was in the band, there was some sort of stability to the band and once he was out of the band, there seemed to be a lot of infighting within the band. Is that correct or… 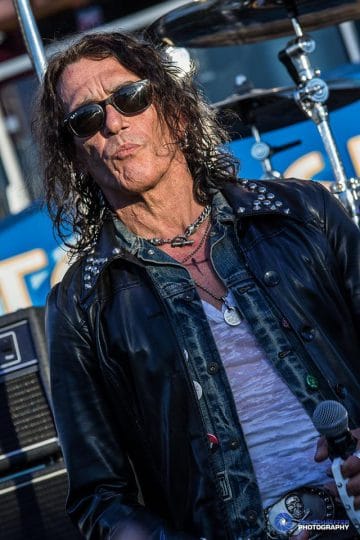 Stephen Pearcy: Correct. You’re correct. Yeah. You know, everybody has their place. In later years, people took their place to ridiculous [laughs] [pause].

Stephen Pearcy: Their level of thinking and unfortunately, it’s history. Next! We’re very happy right now. The band is sounding great. We are doing some great shows. We just intend on staying on this fast track and give you the best we can.

Sleaze Roxx: Cool! I know you’re thinking of going forward but just one last question about Bobby Blotzer. Is the litigation over with him because we haven’t heard about him in a long time [since end of March 2018]?

Stephen Pearcy: [Laughs] I wanted to stay off this subject but everything is well and over.

Sleaze Roxx: When can we expect some new Ratt songs from you guys?

Stephen Pearcy: Probably… We’re going to have them prepared for next year. A lot is happening for the band and we hope to have something on the table by the beginning of the year ’cause once we get writing. We’re saying one or two songs now but I have a feeling that once we get in there with all the writing that’s done and that we still do, and see what the other guys have got, I’m sure that we’ll have plenty of material to go around.

Sleaze Roxx: One last question for you, was there ever any thought in getting your solo album partner in crime Erik [Ferentinos] to join the band Ratt?

Stephen Pearcy: [Pause] Yes and we have to be… You know, I am still doing solo stuff and will continue always as well as other people in the band. We know that everybody has their own thing so we like to leave that door for everyone.

Sleaze Roxx: OK. So was Erik considered to be one of the guitarists or it just didn’t work out?

Stephen Pearcy: Yes. He was. Yes. He was but you know, he’s literally been in my band for years, in my solo band. He’s a big part of my life, my solo records, the mixing, the engineering, just everything. I mean, we’re like a team when I go in to do my solo records with Matt Thorne in the studio, and Erik and myself. We get in there and there is no stopping us so I wanted to keep that a little separate but he’s always ready to go at any moment. He’s a total professional.

Sleaze Roxx: Well, thank you very much for doing this interview. I really appreciate it.