Baltimore, Maryland rockers Kix reformed in 2003 and quickly began playing the U.S. rock festival circuit. Since that time they’ve become a staple in every major North American festival and rock cruise out there today. Kix has just unleashed a live DVD/CD titled ‘Live In Baltimore’, recorded a few years ago, and singer Steve Whiteman took some time to sit down with Sleaze Roxx to catch up to speed on what’s new with Kix, the absence of Donnie Purnell, and the possibility of Kix recording a follow up to 1996’s ‘Show Business.’

Sleaze Roxx: You have some new live material.

Steve Whiteman: Yeah we have a new live DVD/CD. It’s available on Amazon, iTunes and other online outlets for sale today. It was recorded a couple of years ago at a place called Ram’s Head Live in Baltimore. The whole thing just came together on its own, it wasn’t something that we set out consciously to do. These three guys approached us about shooting the band — they didn’t want to charge us they just wanted to shoot us and show it to us to see what we thought. They wanted to shoot us to get their names out there. We sat down to look at it and we said, “This thing is really, really good. These guys really knew what they were doing.” We decided to mix it, edit it and see if we could find a distributor — it took some time because we all have our private lives, families and other responsibilities. We found Frontiers and they were very interested in it — they wanted to release it, but they also said that they’d like a new studio album from us.

Sleaze Roxx: You’ve issued a live album before. How much ‘sweetening’ did you do on this album because it sounds raw and very live.

Steve Whiteman: We didn’t do one overdub on this, in fact I didn’t do one overdub on the last one either. I don’t believe in that. If we say that its ‘live’ then it should be ‘live’ because that is what we sounded like that night. We’ve done this so much that it’s nothing new for us. We’re on stage having a good time and it comes across in the DVD. For those that have seen Kix live this will take them back to the last time they saw Kix. For those that haven’t seen us live they’ll want to come out and see us because the show is fun, it’s energetic and the music is great.

Sleaze Roxx: Kix is a hard rock band that has more in common with a band like AC/DC than some of the glam bands which you were categorized with. How did you feel about that?

Steve Whiteman: We fought that image because we were around well before that shit started. When we got our record deal in 1980 we were more compared to AC/DC, Aerosmith, and bands like that. Unfortunately Atlantic Records just let us ride out there on our own, they didn’t give much of a push to our first three albums. Anything that Kix achieved in the early years was though our own blood, sweat, tears, perseverance and the refusal to give up. It was all our persistent touring that kept gathering fans and kept selling enough records for Atlantic Records to pick up the next option.

It wasn’t until the fourth album that they pushed that magic button. We started making videos, we started getting airplay on radio because they’d have the promotional team out there to push it — that’s were it all popped. All those bands from that era were all those ‘hair bands’ so we got lumped in with that shit. It never pleased us, but we had to take the good with the bad because we were finally on MTV, we were finally on the radio, and we were finally out of clubs and playing arenas — a lot of good came out of it too.

Sleaze Roxx: I didn’t discover Kix until I picked up an Atlantic Records cassette compilation they released that featured Frehley’s Comet, Overkill and Savatage. They threw “Midnight Dynamite” on the compilation which caught my attention. The big one was ‘Blow My Fuse’ that blew the doors wide open.

Steve Whiteman: That one was big for us — that got us several arena tours with a lot of big bands. It got us to the UK and to Japan. It achieved everything that we hoped it would — we hoped it would continue with the ‘Hot Wire’ album but the grunge thing washed ashore and threw all of us out of the party.

Sleaze Roxx: In retrospect do you think you could have done something different on the ‘Hot Wire’ album? It still sounds great today.

Steve Whiteman: I don’t think so. We were all very pleased with it and we thought it was a great predecessor to ‘Blow My Fuse’ and we really thought it was going to surpass it. That’s around the time when the Nirvanas and the Stone Temple Pilots began dominating radio and MTV. Atlantic couldn’t get any of our stuff airplay. We released a video for that album and the album was dead in the water by the time it was released. It wasn’t just Kix, it was any band in the genre — we were black balled and were told we weren’t ‘cool’ anymore. There was a new party in town and we weren’t invited.

Sleaze Roxx: Kix scored a top ten hit with “Don’t Close Your Eyes”, in retrospect how do you feel about that now? It was huge exposure, but some of the people that bought the single and the album pegged Kix for a band on the ‘lighter’ side.

Steve Whiteman: Yeah, that’s always a fear. That’s what record companies go for — the power ballads. Kix is hard rock ‘n’ roll band so we insisted on releasing two songs before we agreed to have a ballad released. That song was massive for us, it pushed ‘Blow My Fuse’ to platinum and sold half a million copies on its own as a single. It helped push us over the top — it was all good (laughs).

Sleaze Roxx: “Don’t Close Your Eyes” wasn’t the typical power ballad, it was kind of dark and edgy.

Steve Whiteman: Yeah, it was. It was an anti-suicide song — there were some people that claimed it promoted suicide when in fact it was the opposite.

Sleaze Roxx: The big one on ‘Blow My Fuse’ in my opinion is “Cold Blood” it’s one of my personal all-time hard rock songs ever. I have to dial that up to 11 every time I listen to it.

Steve Whiteman: Yeah, that one always goes over great live. We can’t get off stage without playing that one, “Blow My Fuse” or “Don’t Close Your Eyes.”

Sleaze Roxx: Kix disbanded and reformed around 2003 if I recall correctly. 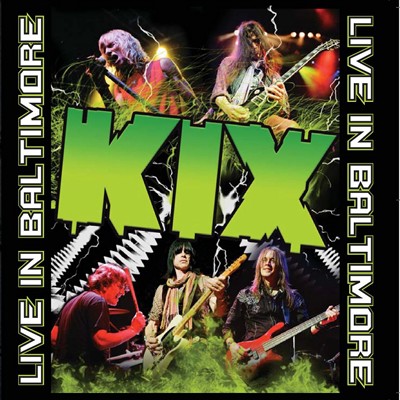 Steve Whiteman: Yeah, it was in 1996 when we were off Atlantic Records we went with a smaller label CMC. Our thought was that if we worked with a smaller label we’d get more attention, but we ran into the same problem because radio wasn’t going to play us and the smaller label didn’t have the power to promote us. We looked at each other and we saw the money declining, the rooms getting smaller and shittier, and we wanted to go out with our heads held high and we disbanded — that was 1996. It was about ten years before Ronnie (Younkins), Brian (Forsythe), Jimmy (Chalfant), and I were in two different bands — my band was Funny Money and Ronnie’s band The Blues Vultures were playing together in Baltimore and as a treat for the fans we did a little Kix mini set and the crowd went ape shit. So we got Brian involved to see where this would go. It’s evolved and now we’re doing about 30 dates a year and we’re digging it.

Sleaze Roxx: A lot of rock bands are only playing a handful of dates these days — it seems like the festival circuit is the way to go.

Steve Whiteman: Right, festivals are great and so are the cruises — we did one with like 20 bands, it’s four days on a ship. The Rocklahomas and festivals like that have been great exposure for us. People have been writing rave reviews of our live show and it’s created a little bit of a buzz and made us cool again.

Sleaze Roxx: I don’t recall hearing the story as to why Donnie Purnell is no longer involved in Kix. I recall reading and hearing interviews where you’d say that there would be no new Kix music because Donnie wasn’t involved and he wrote the bulk of the material. Aside from Frontier’s interest in a new album, why the change of heart?

Steve Whiteman: (pause) Starting with Donnie, when Kix disbanded in ’96 I started a band called Funny Money. In Funny Money I was given a vehicle where I could write my own material which was hard to do in Kix because Donnie controlled everything in that band. Getting anything onto a Kix record was hard to do because of that reason. I was finally able to write an entire album’s worth of material for my band Funny Money. There was a song that Donnie and I had written that I wanted to release, I called him up so he wouldn’t be blindsided by it and he tore into me. He called me every name in the book — he accused me of using his name and his talent and that I was taking the song from him. It was the most unpleasant and nasty conversation that I’ve ever had in my life. It was right then and there that I decided that I never wanted to go through that ever again. When it came time for us to reform and we performed some local shows it was our decision not to have him involved because we wanted to enjoy it and not have any pressure. Donnie would always add so much pressure to everything and it was just so unnecessary, so we decided to try it without him. To be honest I’ve never had a fan walk up to me and ask me, “Where’s Donnie? How come he’s not involved?” We were going out to play the old music — we could do that without him just fine.

As for the new studio record, we agreed to that for the sake of getting this DVD out — we felt that strongly about it. Funny Money was getting ready to record a new CD so I had a bunch of material lying around. Mark Schenker, our bass player, has a lot of material lying around and Brian has some material for use for a new record. Our plan is to combine this music and put 25-30 songs together, throw them in the pot, work on them little by little, and see if we can turn them into Kix songs. If we can get 10-12 strong Kix songs together for an album the fans are going to love — then we’ll put it out. We look forward to promoting the new music — Kix is back and we’re going to be around for a while.