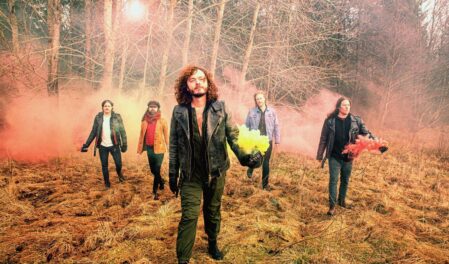 I CAN’T REMEMBER HOW I FIRST CAME ACROSS SWEDISH ROCKERS STRÖM BUT I DO REMEMBER WATCHING AND LISTENING TO THEIR VIDEO FOR THEIR SINGLE “TIDEN SJUNGER” AND BEING REALLY IMPRESSED WITH THE GROUP’S SEEMINGLY FAMILIAR AC/DC LIKE GUITAR RIFFS AND MELODIES. AT FIRST, I THOUGHT THAT I SIMPLY COULDN’T MAKE OUT WHAT LEAD VOCALIST  ZDRAVKO ZIZMOND WAS SINGING BEFORE REALIZING THAT THE LYRICS WERE ENTIRELY IN THE SWEDISH LANGUAGE. NEVERTHELESS, THE MUSIC AND MELODIES WERE SO GOOD THAT I QUICKLY PRE-ORDERED STRÖM’S DEBUT SELF-TITLED ALBUM, WHICH JUST HAPPENED TO HAVE BEEN RELEASED TODAY. I RECENTLY GOT THE CHANCE TO 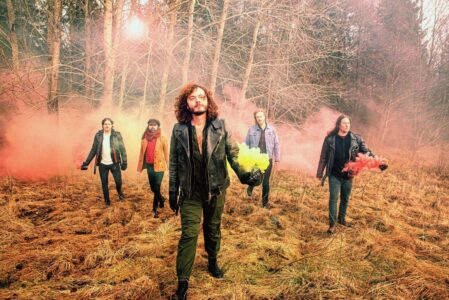 Sleaze Roxx: So let’s start at the beginning. How and when did the band form?

Ström: We have all hung out and worked in the same circles and played in a number of different bands that bumped into each other over the years, but we’ve never played together in the same band. In 2017, both Zdravko and Johan were cast in a production of the rock opera Jesus Christ Superstar as Jesus and Judas and began to hang out more and more. When the performance period was over, they continued to hang out and the idea of starting a band together came up. After that, the band came together rather quickly because we knew very well which persons we would love to have in the band.

Ström: The catalyst here was probably that Jesus Christ Superstar was performed in Swedish and that Zdravko realized that there was something special about it, you got to the core and heart of the lyrics in a completely different way. We have all played in bands that sang in English, but Swedish was a completely new approach for us, and this sparked something in us.

Sleaze Roxx: How do you think that singing in Swedish will enhance your international appeal?

Ström: Difficult question, we probably didn’t think at all that this would interest anyone outside of Scandinavia. That we are sitting here right now with international press and answering questions about rock in Swedish is a little surreal.

Sleaze Roxx: Has there been any discussions about singing songs in English in the future and if so, what have been the extent of those discussions?

Ström: No, the band’s entire identity was born from the fact that it would be sung in Swedish.

Sleaze Roxx: Your album cover is really cool. How did you come up with the idea for the album cover?

Ström: Ström can be translated into power and we somehow wanted to depict that we would surround ourself with power and bring it wherever we go. The cover concept itself probably came from our manager, Daniel Josefsson, and then we had discussions between him and the band about how and what the scene should be. To show our hometown Växjö, which is located in the deep forests in southern Sweden, was important and the concepts were that we wanted to come out of the forest and give a gloomy Växjö power and energy. Our dear friend and cover artist Vedran Tomas did an exceptional job!

Ström: The name alludes well to what we are, how we sound and what we stand for. Power, energy and Swedish rock ’n’ roll. Ström plain and simple.

Sleaze Roxx: I have read a few comments about Ström that Zdravko sounds like Jason McMaster. What are your thoughts in that regard?

Ström: We are humbled by all such comparisons.

Sleaze Roxx: The first band that I thought of when I heard Ström’s single “Tiden Sjunger” was AC/DC. What are the band members’ main influences?

Ström: We all listen to very different music but the love of classic hard rock brings us together. In the band, we have fans of everything from death metal and doom, to grunge and broadway musicals. You can hear the melting point of all this on the record.

Sleaze Roxx: How did you end up choosing which songs would get the video treatment?

Ström: We are probably so cocky that we think all the songs on the record could be singles and suitable as videos. But we probably went more into what the songs were about and what message we want to convey to people who don’t know who we are, and we think these songs can do the job. 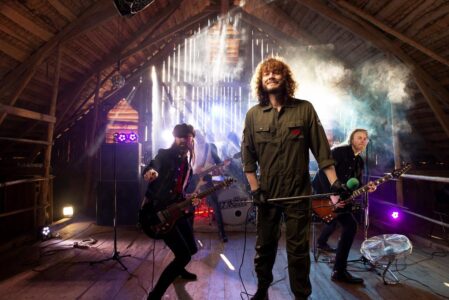 Sleaze Roxx: Have Ström had the opportunity to play a lot of live shows considering how difficult it has been to do that with the Covid pandemic during the last two and a half years?

Ström: During 2022, there have been quite a lot of shows as Sweden has opened up more and more. In 2020 and 2021, the shows were sporadic and that’s when we took the opportunity to write and record the album.

Sleaze Roxx: What are your plans for the rest of the year and into 2023?

Ström: We are so looking forward to the album release. We are very curious to see how people will receive it. After that, we hope to be out on the road a lot, see new places, meet new friends and play for the people.

Sleaze Roxx: What would be your ideal tour package that included Strom?

Ström: Tough question. It sure would be fun to get the opportunity to open up for some of our heroes.

Sleaze Roxx: What is one thing about each band member that the public would not know?

Ström: Johan used to be a goal keeper in football and doesn’t have a driver’s license. Calle likes to walk in the forrest in search for big rocks. He also collects fishes made of glass. Zdravko is immensely fond of strong sausages, is afraid of heights and detests snakes. Joel has a barely visible third nipple and is childishly fond of snakes. Tomas absolutely loves cats — any kind — and hates snakes, any kind. Death to ’em all!

You can purchase Ström’s debut self-titled album via their Bandcamp page.

Thank you to Jon Freeman of Freeman Promotions for facilitating the interview.