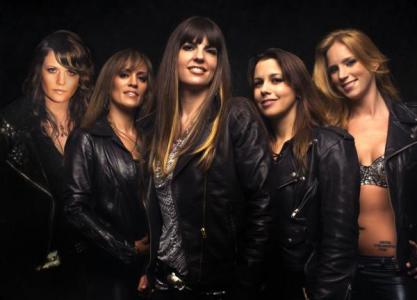 The Iron Maidens blew through Portland on September 30th at Dante’s, with Love Drive and British Steel opening. For those that don’t know, The Iron Maidens are an all female tribute band to Iron Maiden and they put on a hell of a good show too. Recently I had an opportunity to catch up with singer Kirsten Rosenberg and drummer and founding member Linda McDonald to talk about how their tribute band grew into a year round touring machine.

Sleaze Roxx: First of all thanks for the great show in Portland. It was getting late and I just couldn’t convince myself to leave early. I bought the DVD and I must say it’s a great souvenir, I even got a chance to have you ladies sign it.

Linda McDonald: That place (Dante’s) was great! We love Portland.

Kirsten Rosenberg: We loved it there, it was the right venue for this band.

Sleaze Roxx: I was a standing at the front of the stage on the right side. I was facing Courtney Cox (Adriana Smith) and this drunkard bulldozes his way to the front, past me and the rest of the people in front, and screamed “how did you get such big tits?! We all want to know?!” She ignored him and he was promptly escorted back to the bar. How much of that type of nonsense do you have to deal with?

Linda McDonald: We don’t deal with much of that kind of stuff. There are always one or two people that are unhappy with their lives. It’s their misery and their failure; we’re chicks and in their world they have to take it out on the chicks.

Kirsten Rosenberg: Wait a minute! I never hear any of the cat calls. I’m disappointed and pissed off, where are these people (laughs)?! Seriously though, that scenario you described is an unusual thing. There are some of the die-hard fans up at the front trying to get band member’s attention with marriage proposals and stuff like that. As far as the stuff with the sexual innuendo, that’s not a problem for the most part.

Sleaze Roxx: Linda, you helped found The Iron Maidens back in 2001. Why did you form the band and did you have any idea that this tribute would turn into what it has become?

Linda McDonald: The short answer is, why not (laughs)?! If you’re going to do a tribute band you might as well do one to a band whose music you absolutely adore. There were enough girls that we knew that were musicians that we felt that it could be done… and we pulled it off I think. Back then there weren’t many all female bands, and tribute bands were just starting to catch on.

Sleaze Roxx: How much touring do The Iron Maidens do on a yearly basis? Has this become a steady gig?

Kirsten Rosenberg: Well we’re playing just about every weekend. We head out of town for a tour every three months or so. We’re usually out for about a week on each tour. I think the fact that we’re able to gig steadily speaks to people’s love of Iron Maiden and like Linda said, we do it well. 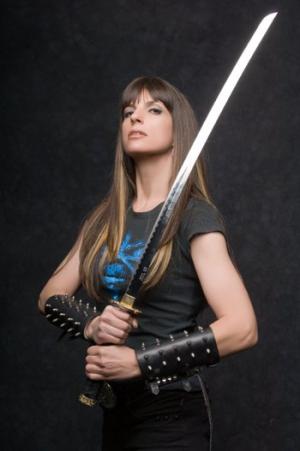 Linda McDonald: We know just how lucky we are; as you said in the beginning, it was just for fun and we started getting offers to play more. The more we played the more the word got around that we put on a good show. We often have to pinch ourselves just so we know we aren’t dreaming. We are very grateful to be able to do this and have fun doing it.

Sleaze Roxx: Kirsten (Bruce Chickenson) you do a phenomenal Bruce Dickinson. How did you get involved with the band?

Kirsten Rosenberg: Thank you. I stalked them and told them I will kill you if don’t hire me (laughs)! I’m kidding of course.

Linda McDonald: She actually did say that (laughs)! We were auditioning singers for about two months and Kirsten was one of the first singers that we auditioned, she is from the East Coast. We really clicked with Kirsten… we liked her voice, her personality and her stage presence. Oddly enough she was also a nut like the rest of us, so she fit right in. Now we were initially a little bit concerned about her moving out here, but as it turned out she has family in the area. She wanted to rock so it was worth it.

Kirsten Rosenberg: This gig was well worth the transcontinental move. I grew up in Southern California and then I moved to the East Coast as an adult and have lived there for several years. Like Linda said, I do have family here and I do have roots and connections. It wasn’t like moving away, it was like moving back home actually. The timing was right and I couldn’t pass up this opportunity… it was well worth it. I would have moved to Turkey for this opportunity, that’s how badly I wanted it.

Sleaze Roxx: How long have you been in the band at the present time Kirsten?

Kirsten Rosenberg: My first official show was in April of 2009, so roughly over a year and a half or so. I can’t believe how time flies.

Sleaze Roxx: Is Heather Baker (Dee Murray) once again a permanent member of the band then?

Linda McDonald: She used to be our Adriana Smith before and now she’s playing the Dave Murray part. Heather’s our principal Dave Murray member and we have a couple of other rotating members who stand in when she’s not available.

Kirsten Rosenberg: She does that very well too.

Sleaze Roxx: I also have to add that Wanda Otriz (Steph Harris) left me dumbfounded. She played all the Steve Harris licks flawlessly and she really locked in with Linda. If you closed your eyes it was like hearing Steve Harris and Nicko McBrain live. It was incredible. 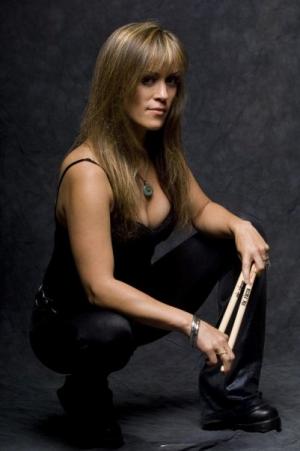 Linda McDonald: Thank you, that’s a very high compliment. We try to do our best. There are two things that I hear from people when they come to the show for the first time not having heard us. They either think that it’s going to be a disaster, or it’s going to be incredible. We hear nothing but complimentary things for the most part.

Sleaze Roxx: How much do you think that YouTube has helped you guys get people in the door? In the past people weren’t able to see clips of live footage by any bands and now they can sample it regardless of how crude the footage is.

Linda McDonald: I think it has defiantly helped get the word out. Remember when you couldn’t record at a concert? You just can’t stop it. Everyone has a cell phone, camera or other means of recording footage. Even the A-list original acts can’t stop it anymore. You can’t get any better publicity than the footage that people put on YouTube. Word of mouth still is the best way.

Sleaze Roxx: Have you been contemplating or rehearsing any Iron Maiden tracks from the new record The Final Frontier?

Kirsten Rosenberg: We get asked about Maiden’s new material, correct me if I’m wrong Linda, but we’d like to keep it to the classic Maiden songs. We like to concentrate on the classic stuff that Maiden doesn’t perform or that you rarely hear in concert. The did do the Somewhere Back On Tour where they played some classic stuff, but they tend to play a lot of new music live.

Linda McDonald: I think Kirsten hit the nail on the head. We’d like to play songs from the classic albums that you won’t hear Maiden play. We’ve played some new stuff from the Dance Of Death album, but that’s about as current as we’ve gone so far.

Sleaze Roxx: One track that you played in Portland was “Alexander The Great” which I don’t recall Iron Maiden playing live ever, correct? You also did “Sea Of Madness” one of my favorite tracks from Somewhere In Time.

Linda McDonald: They’ve never done that song live. In Mexico City Steve Harris and Bruce Dickinson were in attendance watching us when we played “Alexander The Great”. They said that they enjoyed the show and watching us play the song wasn’t enough to make them want to play it live themselves (laughs).

Sleaze Roxx: Have you ever thought of adding another singer and doing a Paul Di’Anno only tribute? Do you think that would go over well? 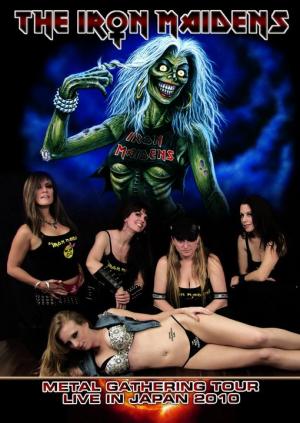 Kirsten Rosenberg: That’s interesting. I don’t know? What do you think Linda?

Linda McDonald: Funny you should mention that. A while back we were selected as the backing band for Paul Di’Anno to do a U.S. tour but he was unable to get into the country at that time. To do an all Paul Di’Anno set would be different but we like to mix the set up a little bit more.

Kirsten Rosenberg: As much as I like the Paul Di’Anno era Bruce Dickinson is more my personal muse. We’ve toyed with the idea of doing full albums at some point.

Sleaze Roxx: If you could name an album that you would love to do from beginning to end which would it be?

Linda McDonald: I’d have to say that I would really love to do Somewhere In Time.

Kirsten Rosenberg: I’d love to do one of the first three albums myself.

Sleaze Roxx: Before I let you go I have to ask you about the Metal Gathering Tour DVD. It was filmed in Japan and you have it for sale at your shows and on your website. What’s been the reaction of the fans toward it? Can we expect more DVD’s in the near future?

Kirsten Rosenberg: I have heard some very positive things from people about the DVD. There will definitely be more DVD’s down the road, it might be a little while though. The Japanese DVD has a some good footage — it’s shot in high definition, it’s edited nicely and we have a limited amount available for sale.

Linda McDonald: Right, it’s a Japanese import and you can click the link on our website to buy a copy. The DVD was shot earlier this year and the quantities are limited. In the footage of us walking around sight seeing you can hear us playing “Genghis Khan.” The fans that have seen it really enjoy it.

Sleaze Roxx: Any stories about the trip to Japan?

Kirsten Rosenberg: The sight seeing was great, you really have to see it to believe it. We have to come up with a good story here. The people were so polite and passionate about Iron Maiden, they made us really feel welcome in their country. They are very polite but they know how to rock.

Linda McDonald: Good Lord do they know how to feed you! I’m not kidding, each stop we’d make the promoter would say, “OK time to eat something.” So we’d eat and two hours later we’d stop somewhere else and they’d feed us again! We ate and ate… we were thinking we were going to look like Buddha by the end of the tour (laughs)! We love Japan.