Many hard rock / metal bands evolving in the North American side talk about touring in Europe but not many ever do. Rusted is one of those bands that have ventured on their own throughout Europe and it turned out to be their most successful tour of their short musical career. Just prior to embarking on their European tour, the band released an acoustic record called ‘Restless Gypsies‘. Sleaze Roxx caught up with Rusted’s always friendly frontman Tony Rust to discuss the band’s European tour, the new record ‘Restless Gypsies’, the upcoming live record and when we can expect a new studio record.

Tony Rust: We really wanted to give those songs another dimension. Sometimes, when we were playing the ballads with the acoustic and stuff, people were like “Oh. I really like the ballad portion of the show.”. Lots of our songs are like really easy to work with an acoustic guitar. So we were thinking that it could be a great thing to release an acoustic album for making people wait until the next record. 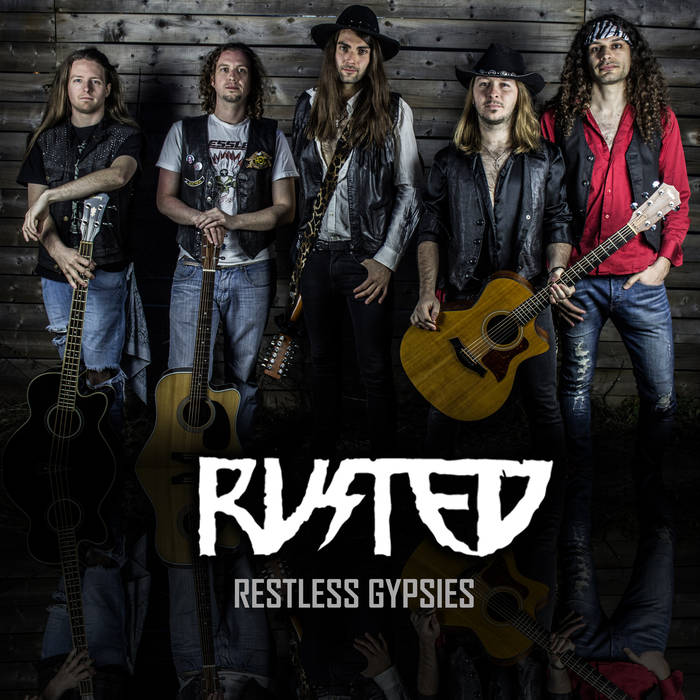 Sleaze Roxx: What was the recording process like for ‘Restless Gypsies’?

Tony Rust: For ‘Restless Gypsies’, we really wanted to capture the live intensity of the songs. We were altogether in the studio. I was singing in another room and all the guitars and drums were in the same place, and we just recorded live.

Sleaze Roxx: Was it a fast process?

Tony Rust: It was pretty fast actually. We played all of the songs five or six times each and we chose the best ones of them all.

Sleaze Roxx: Will you be performing acoustic gigs in the future?

Tony Rust: Yeah. Of course. We really want to play a couple of them this summer and maybe in the fall, a little tour, an acoustic tour, something like that. But we are going to mix acoustic and electric.

Sleaze Roxx: I was surprised that ‘Restless Gypsies’ came out because I was expecting your next record to be your live album but I understand that it has been delayed. What is going on with the live record?

Tony Rust: Now, we have everything settled for the release of it. We are just waiting for the mastering and to listen to the final tracks and stuff. And after that, we are going to release it probably before Christmas. 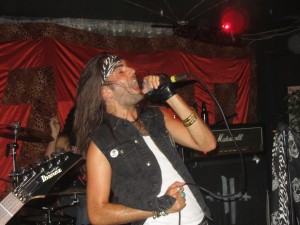 Sleaze Roxx: I believe that this was the first Rusted record where you used crowd funding to get the live record together. Why did you choose that route?

Tony Rust: We heard about the crowd funding for a while. Lots of bands that we know use that for tours, recording, merch, etc. So we were thinking maybe we can try this just to look how it is going. You know, just to see if fans are willing to participate in this process so we are really excited that it has worked out so well for us.

Sleaze Roxx: Why didn’t you do it for ‘Restless Gypsies’?

Tony Rust: Because ‘Restless Gypsies’ is more for the fans who gave money. If you gave us money for the crowd funding, you’ll receive a free copy of it. It is just a record to make fans wait until the release of the live album.

Sleaze Roxx: What songs can we expect on the live record?

Tony Rust: What songs? Most of the songs are from ‘Rock Patrol‘ but we play two acoustics from ‘Restless Gypsies’ in the set and maybe a cover or two but I am not going to say it (laughs) right now. 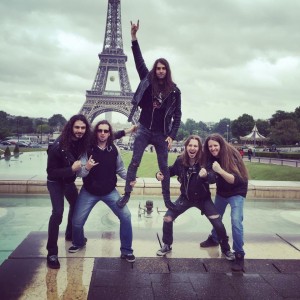 Sleaze Roxx: (Laughs) fair enough. Many bands talk about going to Europe but Rusted is one of the bands that has gone there to tour and as a headliner. How did this tour come about?

Tony Rust: The first idea about the tour is that everybody is talking about Europe always — metal there, how people are into heavy metal, hair metal — so we were like “OK. Let’s go. Let’s take the shot.” (laughs). We just tried and man, that was incredible. It was ten times better than any tours that we have done here in Canada and in the USA. There were fans at every show in the middle of the week. During the weekends, there were a lot of people actually. We are really really proud of that tour.

Sleaze Roxx: Were you surprised with the scene in Europe? How is it different than in Canada or the U.S.?

Tony Rust: How is it different? The most different thing about Europe is like in Europe, we are really like exotic because we come from Canada. People are really happy that we travel to their cities. And it is like “OK. Those guys are from very far so I think that we are going to go help them and support that.”.

Sleaze Roxx: Did it help having Maniak [Rusted guitarist Bruno Maniak] based in France to book the tour?

Tony Rust: In France, it really helped. For most of the other countries, Maniak was not involved. But for France, it was very helpful to have a French guy in the band (laughs). The people know him. He is like a rockstar in Montpellier [France] (laughs). That show was pretty crazy. It was a sold out show on a Sunday night — lots of people! He is really a rockstar in his little town (laughs)!

Sleaze Roxx: (Laughs) what were the highlights of your European tour?

Tony Rust: For sure, Montpellier was one of the highlights, It was just crazy because of all of Bruno’s friends and fans there. We had some big surprises. I think that Spain was one of the big surprises of the tour. It was on a Monday and we were not expecting anything at all so we just showed up and it was crazy! But my personal favorite was Belgium. In Belgium, the venue was really cool, the people were crazy and it was a Monday night or something like that. Lots of good beer, lots of cool people — really liked it! 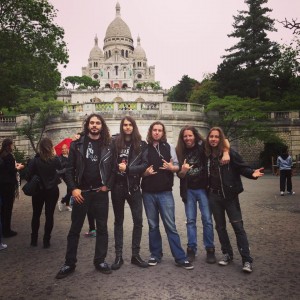 Tony Rust: Actually, it is the big difference because we know a lot of bands that they are not having the same things in their band. They are more or less just playing with each other. But for us it really helps because even when we are on tour, and you are stuck in the van for three weeks with those guys, it really helps that we can say “OK. We are friends so we can say whatever we want to each other and nobody is going to be hurt.”. You know, on the way things happen. It is hard to describe but just being friends and not just being working partners or something, it is way better I think.

Sleaze Roxx: What’s next for Rusted aside from the live record?

Tony Rust: After the live record, we really want to record another album, another long play. I think that at the end of the summer, we are going to go into the studio and try some new songs. We really want to before the next summer, go on tour with this new album.