IT’S ALWAYS EXCITING WHEN A NEW BAND POPS UP. TURBO SHOKK HAVE BEEN GENERATING LOTS OF INTEREST WITHOUT HAVING EVEN RELEASED ANY SONGS YET TO THE GENERAL PUBLIC ASIDE FROM THEIR TRACK “CAN’T CHAIN ME DOWN” THAT WAS RECENTLY PREMIERED ON A RADIO STATION. THE GLAM ROCKERS WILL BE RELEASING THEIR DEBUT ALBUM ‘GET RADICAL’ ON DECEMBER 2ND AND  RELEASING THEIR FIRST SINGLE “PUT THE HAMMER DOWN” IN TWO DAYS. SLEAZE ROXX CAUGHT UP WITH TURBO SHOKK TO TRY TO FIND OUT MORE ABOUT THEM. AS YOU’LL BE ABLE TO READ, THE TURBO SHOKK BAND MEMBERS DO NOT TAKE LIFE TOO SERIOUSLY AND HAVE A GREAT SENSE OF HUMOUR. 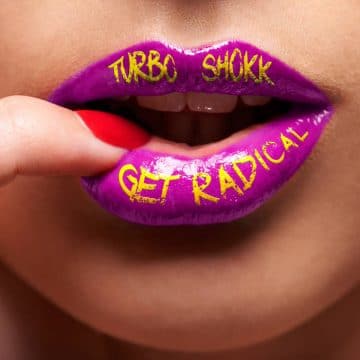 Sleaze Roxx: I understand that Turbo Shokk may be the second coming of Steel Panther [laughs]. What are the similarities and differences between the two bands?

Stack Manley: Whoa whoa whoa… I don’t know where you’re hearing this stuff from but Turbo Shokk doesn’t do sloppy seconds. At least I know I don’t. Come to think of it, I’m a little unsure of where Razor stands on that sort of thing… but anyway, we’re never number two, always number one. Whoever “Steel Panther” is, if someone is comparing them to us, then I guess they rock hard, ride free, and give the ladies what they need, otherwise they have no business breathing our air. Maybe we’re like… fellow travelers or whatever… Just remember to stay in your lane, boys.

Michael Arcane: I think you can hear a lot of World Music influence in our stuff, you know? Like really tribal. Are they a World Music band? It’s cool if they are. I just don’t actually listen to that stuff.

Sleaze Roxx: Alright [laughs]… You have a new album ‘Get Radical’ which will be released on December 2nd. What can people expect to hear on Turbo Shokk’s debut album?

Stack Manley: The people? They’re gonna hear what they’ve been missing, man. Look out there at the music world and tell me what’s wrong. Where’s the rock? Nobody rocks anymore! If they even try, they don’t rock hard — not nearly hard enough! The fire burned out, man… and Turbo Shokk isn’t just here to like… put some old newspaper in there, kneel down and blow on it… You’d probably get light headed and fall over into the hot coals or something. No! We’re here to blast that son of a bitch with napalm! Now that’s what I’m tryin’ to tell you!

Michael Arcane: I really think people will like the drums. I think the album would sound weird without them. And I hope the fans get that same vibe.

Sleaze Roxx: [Laughs] I understand that Turbo Shokk’s debut album has been a long time in the making and there have been some major member “juggling.” Please provide Turbo Shokk’s history including past members.

Michael Arcane: I don’t know how to juggle.

Stack Manley: We had a keyboard player… German guy… What was his name? Michael something but we called him Mike because in German, Michael sounds like Michelle and that just felt weird…

Stack Manley: Yeah! Solid guy, nice moustache, but the thing is we have keyboards in like… one song, so…

Razor O’Shea: We don’t like to talk about it much, but our first lead guitarist…

Razor O’Shea: Holden… Holden McGirth… If only he hadn’t tried to get so damn radical, he might still be here now.

Stack Manley: But then he wouldn’t have been Holden McGirth. Some wounds just don’t heal. But you use the pain… You USE IT. You have to, or it will just eat you alive.

Sleaze Roxx: I am feeling that I won’t get many straight answers from you [laughs]. How about this? Turbo Shokk are presently listed as a three member band consisting of the three of you. I understand that Hedras Ramos played the guitar leads on the debut album. Who will be the band’s lead guitarist going forward?

Michael Arcane: If Hedras is busy, I’d like to try and get Eddie Van Halen. He killed it on “Beat It.”

Stack Manley: Well, whoever it is will have some big shoes to fill. Unless it’s Hedras again in which case, the shoes will be exactly the same size.

Sleaze Roxx: Has the Turbo Shokk juggernaut been unleashed in a live show setting? I can’t tell from your Facebook page postings.

Stack Manley: We’ve been around. Maybe we drift into town here or there as the feeling strikes us, light up some stage out in that great wide open, then we move on. Maybe we leave a trail of broken hearts, ringing ears, and whiskey bottles in our wake. Maybe it took three years to get us all to stay put long enough to commit this cold hard slab of rock to tape. Maybe our problem has been we’re a little too real.

Sleaze Roxx: I got to ask. What’s the groupie situation like for a new band such as Turbo Shokk?

Stack Manley: Whew… Well, first of all, how new we are is in the eye of the beholder. We’ve been on a long road, and maybe you haven’t heard of us before but there are places where Turbo Shokk is the word. I mean it’s two words, but it’s the word. As far as when it comes to the “perks” of this little gig, well… Let’s just say we like ’em perky. Ain’t that right Razor?

Razor O’Shea: Yeah, we do like ’em perky but you know… Gravity is a son of a bitch.

Stack Manley: But we do love to see those Backstage Betties. It’s like the song says: “Well I seen Betty everywhere/Around the world and she’s always there/Sometimes she’s big and sometimes she’s small/But whaddaya know – still feels like Betty after all.”

Sleaze Roxx: [Laughs] Back in July 2014, Turbo Shokk posted an album teaser video on YouTube. How have the songs evolved since that album teaser?

Michael Arcane: The songs have vocals now, and so I think that’s a big step forward, you know, artistically.

Razor O’Shea: The songs were pretty much done at that point already, but we suffered some setbacks and had to retrack some guitars and what not. Also, Stack took a long time to record vocals and we really blew it on our deadlines.

Stack Manley: Look, I told you about that. You know what I was up against.

Michael Arcane: Stack claims some kind of organized crime group broke into his studio and stole his vocal stem files.

Stack Manley: Held ’em for ransom. They knew what they had, they knew the value. If only they had known who they were dealing with… but that’s a story for another time. 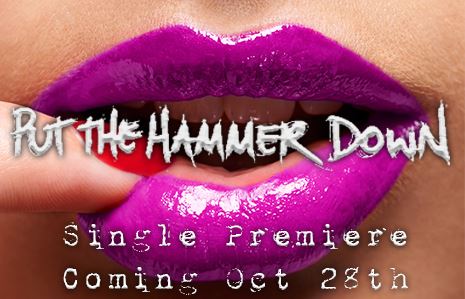 Sleaze Roxx: What’s the idea or story behind the ‘Get Radical’ album title?

Razor O’Shea: We only live to get radical.

Michael Arcane: There it is.

Sleaze Roxx: I understand that there will be a couple of songs released in the next month in advance of the release of ‘Get Radical’. Was it difficult choosing which songs to first release?

Stack Manley: Yeah, because like… Do you hit people with the sexy swing and catchy hooks of “Strip Sin City” first? Or do you give em that “Shokk n Roll”? Pump em up with the upbeat hard rock of “Backstage Betty” or do you throw down with the “Powersmasher”?

Razor O’Shea: Maybe you “Get It Up” and “shokk” your life?

Michael Arcane: We didn’t pick any of those songs.

Sleaze Roxx: What are Turbo Shokk’s plans once the album is released?

Michael Arcane: I’m saving all my money from the album to pursue my dream of opening up a hunting lodge/taxidermist with a strip club inside. I’m gonna call it ‘Furs.’

Stack Manley: Nice! Sounds like dead animals won’t be the only thing getting stuffed in there. I was gonna say maybe a tour, maybe get to writing the next album… but now I think I’m going to ‘Furs.’

Sleaze Roxx: Right… When will we get to see what the Turbo Shokk band members look like?

Stack Manley: Get the album and you can gaze upon the glory until your life is sufficiently “shocked.”

Razor O’Shea: Our manager also encouraged us to tell people about the Turbo Shokk Facebook and Bandcamp pages.

Stack Manley: Yeah so get on your dork box and book my face. Stack Manley. Turbo Shokk. Do all that stuff.

Michael Arcane: I’m on Facebook, but I made the album cover my profile picture. So that’s not really what I look like.

Sleaze Roxx: For each of you, what are your three all-time favorite albums and why?

Michael Arcane: I guess I like Def Leppard’s ‘High ‘N’ Dry’, the Lost Boys Soundtrack, and Billy Joel’s ‘Turnstiles’ album… I think that’s the one with the “Pina Colada” song on it. I think I like them because they sound good.

Stack Manley: Whitesnake’s ‘1987.’ Judas Priest’s ‘Defenders Of The Faith.’ Dio’s ‘Holy Diver.’ I refuse to explain why. The idea that it needs to be explained offends me.

Razor O’Shea: My three favorite things to listen to are the fire in my V-twin, the roar of my straight pipes, and the sound of hearts breaking when I roll out of town, baby!