MISSION ACCOMPLISHED! ONE QUICK LOOK AT THE GROUP’S NAME AND PHOTO OF THE BAND MEMBERS IN SPANDEX WITH BIG HAIR, AND I KNEW EXACTLY WHAT TYPE OF MUSIC THAT TURBOSNAKE WOULD BE PLAYING. THE ONLY QUESTION MARK WAS WHETHER TURBOSNAKE’S MUSIC WOULD MEASURE UP? ONE LISTEN TO THE BAND’S DEBUT SINGLE / VIDEO “ONE WOMAN WRECKING CREW” AND I KNEW THAT TURBOSNAKE WERE INDEED THE REAL DEAL. SLEAZE ROXX CAUGHT UP WITH ALL OF THE TURBOSNAKE BAND MEMBERS BUT MAINLY GUITARIST ERIC ROELOFSEN AND LEAD 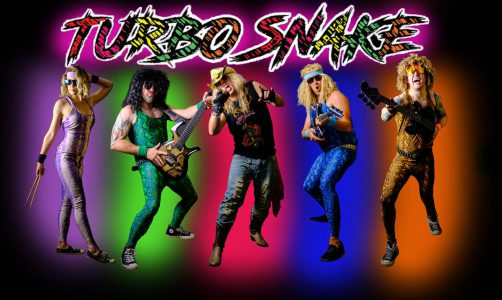 VOCALIST RYAN THOMAS TO FIND OUT A LOT MORE IN WHAT APPEARS TO BE THE BAND’S FIRST EVER INTERVIEW.

Sleaze Roxx: When I first saw a photo of the band, I thought, ‘Here we go again. Another band copying Steel Panther.’ What sets Turbosnake apart from the rest of the bands following in Steel Panther’s footsteps?

Eric Roelofsen: I honestly never got super into Steel Panther or any bands like them. They’re good at what they do though! There seems to be a lot of bands copying the looks of the great ’80s hair bands but they don’t get the sound down at all. Most modern “glam bands” sound like kind of generic rock / metal bands to me. We try and sound like we wouldn’t be out of place in a playlist with the hair bands from the ’80s / early ’90s.

Sleaze Roxx: What prompted you to form Turbosnake?

Ryan Thomas: Turbosnake was formed during the Covid-19 pandemic. I play in a Guns N’ Roses tribute band and also a ’90s cover band. Eric also plays in several bands and the two of us had also previously played together with Grant a few years in an ’80s hair band tribute, called Fisted Sister. With live music being thrown on the back burner, Eric reached out to me with the idea of writing an ’80s hair album. I loved the idea from the get go and we’ve just been plugging away at it since March.

Sleaze Roxx: Who is currently in the band? I ask because one of your promo photos seems to show a female drummer but your video for “One Woman Wrecking Machine” clearly depicts a male drummer.

Eric Roelofsen: The band is Ryan Thomas on vocals, Andrew Tapley on lead guitar, Grant Rushton on rhythm guitar, myself on bass and Greg Keegan on drums. The video for “One Woman Wrecking Crew” and our promo picture were done in haste while Greg was out of town with family, so we said, “Fuck it” and got them done anyway!

Sleaze Roxx: Which bands were you each in prior to Turbosnake and have you released any albums with that or those prior band(s)? 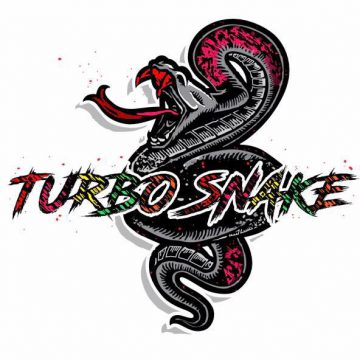 Eric Roelofsen: I am currently playing with the Matadors, a horrorbilly band from London [Ontario, Canada], as well as swing group Twin-Fin and rockabilly band Butch Haller and his Chesterfield Ramblers. All those bands are on Spotify! Andrew Tapley is a mystery! He claims to once have been a rockstar but this can’t be verified.

Eric Roeleosen: Grant played in a punk band with Eric called The Stragglers. They have a few EPs on Spotify. Ryan and Greg have played in some cover and tribute acts. No albums are available for those two bands.

Sleaze Roxx: How did you come up with the band name ‘Turbosnake’?

Ryan Thomas: We really wanted to have a name that screamed ’80s and let you know what you’re in for. I think with our name and the look, right away you will most likely know if you love us, or hate us. We had bounced a few ideas around. I think we had mentioned ‘Alive’, ‘Vintage Ninja’ and a few others along those lines. Turbosnake came out of Eric’s mouth one day and we just started laughing our asses off and Turbosnake was born. He did the same thing years ago, when we formed the ’80s tribute band. During practice one day, he just whispered ‘Fisted Sister.’ I’ve never seen five guys piss themselves so hard. We instantly knew that was what we were going with. Turbosnake was the same moment again.

Sleaze Roxx: What made you decide to go with “One Woman Wrecking Crew” as the debut single / video?

Eric Roelofsen: We decided last minute to enter a summer song competition going on across Canada. “One Woman Wrecking Crew” seemed most appropriate because the other songs on the EP are a ballad and another one that’s a little less accessible to the general public.

Sleaze Roxx: How does the songwriting work within the band?

Eric Roelofsen: I’ll be listening to some tunes at work, and think, “Oh yeah!” We should do a song like that! Then I’ll write a song in my brain on the work floor kind of similar, come home and record the rhythm guitar and bass to a click track. Then I send it off to Greg and he’ll come up with drum parts, come over to my place and lay them down. Then Ryan will lay down his vocals over the completed song. Last, ndrew is sent the track to record guitar leads on top of everything. I call my friend Dana MacCabe to come over and sing backups very often at some point after the lead vocals are done.

Sleaze Roxx: Why did you decide to release a three-song EP when you are apparently sitting on an album’s worth of music? 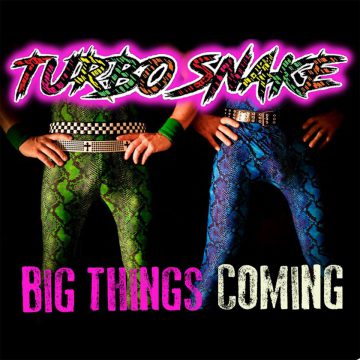 Eric Roelofsen: We want to be able to have a steady stream of content being released, to keep fans engaged. Once we finish videos for the remaining two songs on the EP, we will think about the next three, four, or five to release next.

Sleaze Roxx: How did you come up with the witty EP title ‘Big Things Coming’?

Ryan Thomas: Eric is honestly one of the funniest, wittiest people you will ever meet. He could also enter a huge wang contest with Tommy Lee and take home the first place trophy. He and Grant put that together. I didn’t make the cover. Otherwise, they would have had to call it, ‘Turn On The Light Switch.’

Sleaze Roxx: Although the Steel Panther band members are definitely world class musicians who come up with great songs, a lot of people can’t get passed their over the top image and silly jokes. It would seem that you would have or could be experiencing the same type of issues. What are your thoughts in that regard?

Eric Roelofsen: My thoughts are, if you dont like the ridiculous image, just listen to our music! It’s real stuff unlike our presentation. It would be a dream if everybody could just hear us without seeing our dumb asses. Otherwise, join in the party and wear some spandex yourself… if you’ve got the manhood for it [laughs].

Sleaze Roxx: What’s the rock n’ roll scene like for live shows in London, Ontario, Canada? It doesn’t sound like Turbosnake have even played a live gig?

Ryan Thomas: London is pretty solid. We’ve got some great venues to play and just an army of talented musicians in this city. Some places have taken a hit and have shut their doors due to the pandemic and it really sucks. There is a huge range in diversity with the music here, ranging from rap, jazz, metal, pop, country… There is really a great mix of everything. Some great homegrown talent includes Bobnoxious, Helix, Graham Goss, Twin-Fin and don’t forget Guy Lomardo from back in the day. It is a big university city and a huge scene for DJs. Personally, that’s not my scene and I’d rather sit and watch a live band all day long, but different strokes for different folks. There are several beaches in the area as well and they always have bands playing live music. It is really unfortunate that this summer has been squashed by Covid. At the same time, I don’t think Turbosnake would have ever got up and running if it didn’t hit.

Eric Roelofsen: Turbosnake has not played live! We’re aiming for next summer to start the gigs and kick things off strong.

Sleaze Roxx: What are Turbosnake’s other future plans? 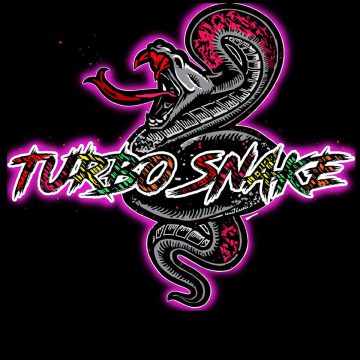 Ryan Thomas: As for future plans, we’ll see what happens? We’ll get these songs off the ground and play some shows once the world gets back to the norm. I’m chomping at the bit to play a live show with this band. I would love to see this album make some noise and I firmly believe it can and will.

Eric Roelofsen: Keep writing as long as we’re super into it, and start rehearsing so we can bring the party to the people.

Sleaze Roxx: For each of you, what are your three favourite albums of all-time and why?

Grant Rushton: All Guns N’ Roses! ‘Appetite For Destruction’ has so many classics! And ‘Use Your Illusion 1’ and ‘2’, fuck, I listened the shit out of those albums!

Eric Roelofsen: Skid Row’s self-titled album is solid from start to finish with maybe the best singer in the genre. Great riffs and production! Warrant’s ‘Cherry Pie’ is a great sounding album with a great singer, catchy hooks and the best “I don’t give a fuck fun attitude” a band can have. Poison’s ‘Open Up And Say…Ahh!’ — who cares about crazy riffs when you can write catchy songs like these? More bands, take note.

Ryan Thomas: I’m an old school ’80s guy, so right off the bat, I’m going with Guns N’ Roses’ ‘Appetite For Destruction’ and then Poison’s ‘Look What The Cat Dragged In.’ I was in grade 5 or 6 and a guy at school played this album for me. It was my introduction to glam and I thought it was the greatest thing I’d ever heard. I also like The Eagles and play their ‘Greatest Hits’ all the times. The music those guys came up with is just unbelievable.

Greg Keegan: Number one, ‘Appetite For Destruction’ is an epic Guns N’ Roses album and the tunes still rock today! Second is ‘Shout At The Devil.’  You’ve got to love Mötley Crüe, especially their early days. They’re legendary. Third is [Metallica’s] ‘Kill ‘Em All.’ Enough said!