Damn Dice have been a part of the London sleaze circuit for a couple of years now, and are about to unleash their debut EP ‘Wild ‘N’ Ready’. The band is top notch and the EP is a ballsy blast of high energy rock complete with soaring vocals and screaming guitars — this band doesn’t disappoint. Sleaze Roxx recently caught up with guitarist Wallis, who co-founded the band with his brother Fransoa, to talk about all things Damn Dice.

Sleaze Roxx: Hey Wallis, it’s an honor to talk to you. How are ya?

Wallis: Thank you very much Andy, the pleasure is mine. I feel great, I’m excited! We’ve got so many things going on at the moment, the EP is coming out soon and its first reviews are all great. We’ve just shot two new music videos, that was really fun, and we’ve got some cool gigs coming up soon as well. We’ll be supporting Tigertailz in November — that’s so cool. The album is ready too and sounds fucking cool man, we’re very proud of it.

Sleaze Roxx: At what point did you realize you wanted to play guitar in a rock ‘n’ roll band?

Wallis: Well, I think the idea has always been there. As far as I can remember there was always music around me and Fransoa (drummer of Damn Dice), we always had this passion for music I think, and the passion won’t stop getting bigger and bigger! But you’re gonna laugh, I actually started playing guitar quite late. I thought musicians were some kind of superheroes, therefore I was scared to try playing any instruments (laughs) but then later when I was 18 I went, ‘ok this is ridiculous, I love music so much, and I don’t even play any instrument!’ Fransoa was doing the same kind of thinking, so we got our first instruments, put everything in Fransoa’s bedroom, and started making noise together (laughs) — but we knew that day that music was what we wanted to do.

Sleaze Roxx: What are some of your influences?

Wallis: I don’t really know man, I listen to a lot of music and different kinds of music besides rock music. OK, well, I’ve got to say that I’m a big fan of KISS, I love Paul Stanley’s voice and the universe they created. I love Skid Row too, a lot, but I’m also a fan of Metallica — well, the first four or five albums — and I like bands like Five Finger Death Punch, Slipknot, In Flames, and Children Of Bodom as well. But when it comes to writing my own songs, I’m just genuinely influenced by melody itself. Before writing a song I sing my guitar riffs and if it sounds catchy and cool, and melodic to me, I play them on the guitar and carry on singing what I’ve got in mind. But I also wrote a lot of our songs, most of them actually, with Fransoa using the same process.

Sleaze Roxx: Were you in any other bands before Damn Dice?

Wallis: No, not at all actually. I’ve always been playing with Fransoa though, and at the beginning we were doing only covers. Then I went to a big music school in France, but after my graduation I had to stop playing guitar for a bit — three years — as I ended up with tendinitis in the elbow due to too much playing. That fucking sucked by the way and I still have pain sometimes! Anyway, during that period Fransoa went to the same music school and when he graduated we moved to London straight away to finally start putting together a band, and we started Damn Dice. So yeah, Damn Dice is actually our first band.

Sleaze Roxx: I’ve gotta say as a guitar player myself I’m impressed by not only your playing but your tone as well, what equipment do you use?

Wallis: Thanks man, that’s really appreciated — especially because I’m quite bad with music gear in general and with my own equipment (laughs). I don’t really like spending a lot of time on trying to get ‘the’ sound to be honest, I usually plug my Les Paul guitar into my Marshall Amp and go full blast on the gain to get a metal sound and that’s it! I just got a new rack though for gigs and Fransoa did my sound, he’s really good at that and he’s more patient than I am (laughs). But for the EP, I did take the time to find the right sound with Akis Kollaros, the sound engineer, and he did a great job. We used a Marshall JCM 900 if I remember well, and we managed to get the sound I wanted for the EP.

Sleaze Roxx: Tell me about the early days with Damn Dice, how did it come about and was it hard to build a following?

Wallis: Well that’s a long story man (laughs). After moving to London with Fransoa, we started looking for a band name first and the name Damn Dice came up quite quickly actually. We obviously wanted something that represents us, represents the way we do things, and the way we live our lives. And we’ve always done things a bit like, ‘don’t know if it’s a good idea but throw the damn dice and we’ll see!’ Therefore we found that Damn Dice represents us perfectly!

Then we started looking for a bass player and a singer. Marco (bass player of Damn Dice) answered back to our ad on a website really quickly, we met him the next day for a couple of drinks at the Intrepid Fox, a metal pub in London, and we also had a jam for a few hours the day after. Everything went great and now he is following us everywhere (laughs)! Alex was the first singer we ever met, we met him at the Intrepid Fox, totally randomly — I remember he was singing out loud over some Judas Priest and Iron Maiden songs, and the three of us were just like, ‘shit! He’s awesome!’. But unfortunately he was way too busy with his band Roxville and couldn’t join us right away. And it’s only a year ago that he joined us, and that we finally gave Damn Dice the voice, the sound, and the direction we’ve always wanted to go.

Sleaze Roxx: When I first became aware of you, you had just toured with L.A. Guns, and you had a song called In Your Eyes which became Down, any special memories from that tour?

Wallis: That was two years ago. Well, that wasn’t really Damn Dice yet to us, I wish we could do that tour now, but yeah, that was a great experience in some ways. It was our first time on the road and we learnt so much about everything! It was quite unreal to meet the guys of L.A. Guns as well, and they’ve been really nice to us. Hopefully we’ll see them again soon!

Sleaze Roxx: There have been some line-up changes, what exactly happened there and where did ya find Alex?

Wallis: Well like I said, that wasn’t Damn Dice yet before Alex joined us, no offense to anyone we worked with in the past though. We did audition a lot of singers, and tried a lot of things before, but since Alex joined us it is finally the band that the four of us always wanted to put together. And in terms of work, performance, song writing and basically everything we’re all on the same page and going towards the same direction. So yeah, now you mention it, it feels to me like Alex has always been in the band — I remember before he joined us he used to come up on stage with us for the encore to sing Youth Gone Wild and every time we were all thinking, ‘shit, that was the best part of the gig!’ (laughs). Anyway, Damn Dice is officially here — we’re Damn Dice… Fransoa, Marco, Alex and me!

Sleaze Roxx: What was recording the EP ‘Wild ‘N Ready’ like? 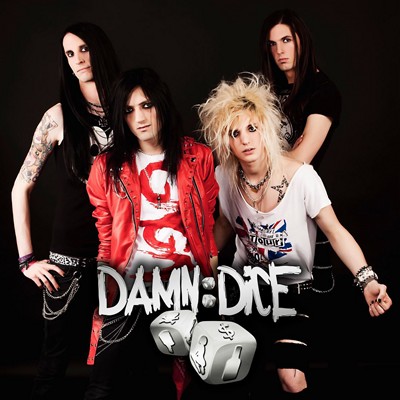 Wallis: That was great man, apart from the fact that it was hard to pick up only six songs for this EP! But the experience was great — we worked with Akis Kollaros at Angry Bee Studio and the guy is awesome. He did a great job, he understood right away what we wanted to do and how we wanted to sound, and he managed to put up with us for two weeks (laughs).

Sleaze Roxx: Are you pleased with the end result?

Wallis: Yeah definitely man. This EP represents us perfectly I think, I just can’t wait to have it out — we really are proud of it! But we kinda turned the chapter already because since the recording we’ve been really busy working on the album and now we’re a bit like, ‘ok when are we going back in studio to record the whole thing?’ Hopefully soon man, I’ll let you know!

Sleaze Roxx: What do you love about music?

Wallis: It means everything to me, and I’m very lucky to live this passion with my brother, Marco and Alex. I love the fact that music follows me everywhere all day and all night long, it’s like a drug — I need to hear melodies, instruments, vocals. I love the fact that sometimes I listen to the same song all day (laughs) or that I shiver when I watch live gigs. As a songwriter, I love creating music, improvising, and singing stuff — I need it, that’s how I express myself! I remember when we listened to the final version of the EP for the first time, we were euphoric as hell. The same thing happens each time we finish writing a song. Playing live is an amazing moment, it’s so intense and the amount of adrenaline we receive is so powerful and addictive.

Sleaze Roxx: What are some of the most outrageous things you’ve experienced being a rock ‘n’ roll guitar player?

Wallis: Playing in this band man — with my brother and my best friends! This adventure with these guys seems so unreal sometimes. When I think that three years ago Fransoa and I arrived in London with the crazy idea of putting together a band in a city that we didn’t know at all and I see how far we got in such a short time, it’s unreal to me! Plus we’ve had such a great feedback and response from fans. I’m always amazed when people contact us, or come to us after gigs and tell us they loved us!

Sleaze Roxx: What advice would you give up and coming bands?

Wallis: Well, from my experience with Damn Dice, I’d advice to always do things full blast and at your best. And to get ready to learn everyday!

Sleaze Roxx: Is there anything you’d like to tell your fans?

Wallis: Yeah, I’d like to thank them for the amazing support, we really are grateful, and we hope to meet all of them on the road. Stay tuned everyone, because it’s only the beginning, and we’ve got a lot to offer!