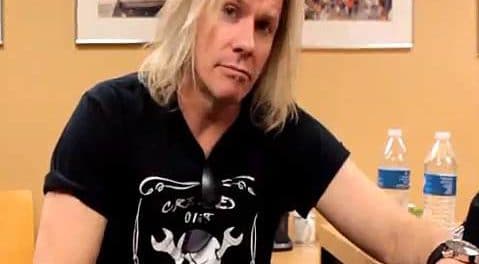 AS I THINK BACK ON THE LAST WEEK AND THE LEAD UP TO THE RELEASE OF WARRANT’S NEW ALBUM ‘LOUDER HARDER FASTER’, I CAN’T HELP BUT FEEL A CERTAIN AMOUNT OF UNEASE TOWARDS THIS ALBUM. THIS IS NOTHING THAT IS WARRANT’S DOING BY ANY MEANS. THE ALBUM IS TRULY FANTASTIC.  THIS FEELING IS MOSTLY BASED ON VARIOUS COMMENTS I HAVE SEEN ON SOCIAL MEDIA. COMMENTS THAT I FEEL WOULD BE HURTFUL TO ANYONE. IT IS VERY EASY TO SIT BEHIND A KEYBOARD AND VERBALLY ABUSE SOMEONE’S HARD WORK AND CREATIVITY WITHOUT FACING ANY REPERCUSSIONS FOR THESE SUCH ACTIONS. 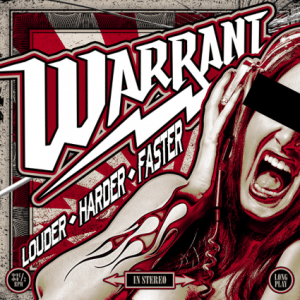 I APOLOGIZE IF I COME OFF IN A NEGATIVE MANNER, BUT THIS IS SOMETHING THAT REALLY GETS UNDER MY SKIN. I REALLY DO TRY TO SEE THINGS OBJECTIVELY AND REALLY LOOK AT THE BIG PICTURE. SOMETIMES THINGS AREN’T ALWAYS AS WE REMEMBER THEM AND IT IS HARD TO MOVE ON. BUT CHANGE IS GOOD, ISN’T IT?

IN TERMS OF ‘LOUDER HARDER FASTER’, I HAVE PAID CLOSE ATTENTION TO THE LYRICAL CONTENT ON THIS ALBUM. I TRULY DOVE INTO THE LYRICS THEMSELVES, TO REALLY SEE HOW THEY HOLD UP TO THE LYRICS OF WARRANT’S PREVIOUS WORK FROM THE ’80S AND EARLY ’90S. FROM MY PERSPECTIVE, I BELIEVE, AND THERE ARE THOSE WHO WILL DISAGREE WITH ME (REMEMBER THOSE  SITTING BEHIND THE KEYBOARD?), THE LYRICS AND MELODIES ARE TRULY FANTASTIC AND FIT THESE SONGS PERFECTLY. THESE LYRICS ARE CLEVERLY FORMULATED TO FIT WITHIN THE COOL EXTERIOR OF EVERY SONG.

THE MAN WHO WROTE THE MAJORITY OF THESE LYRICS YOU MAY ASK IS NONE OTHER THAN WARRANT FRONTMAN ROBERT MASON. MASON AND I RECENTLY SAT DOWN AND DISCUSSED SOME OF THE SONGS ON ‘LOUDER HARDER FASTER’. AS A BIG FAN OF MASON’S, IT REALLY WAS VERY INSPIRING TO PICK HIS BRAIN ABOUT HOW HE APPROACHED THINGS LYRICALLY, AS WELL AS MUSICALLY. MASON WAS VERY EASY GOING AND HUMOROUS, ESPECIALLY CONSIDERING THE LONG DAY HE HAD HAD SO FAR. THERE WERE A FEW TIMES THAT WE HAD A CHUCKLE AT SOME MY QUESTIONS. HE WAS ALWAYS QUICK WITTED AND PERSONAL THROUGHOUT OUR CONVERSATION. 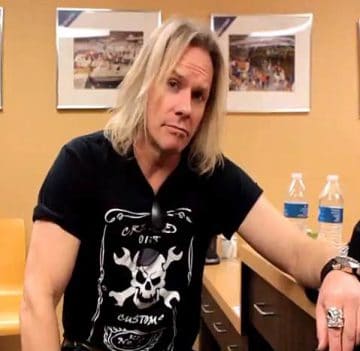 PROUD OF THE WORK HE HAS DONE ON THIS ALBUM AND WITH WARRANT SINCE JOINING IN 2008. HE IS A TRUE PROFESSIONAL. THIS MAN DESERVES MANY ACCOLADES FOR HIS MUSICAL ACCOMPLISHMENTS. PLEASE… ENJOY!!!

Sleaze Roxx: Hey Robert, how are ya?

Sleaze Roxx: Let’s talk about ‘Louder Harder Faster.’ You came up with the title I believe…

Robert Mason: Yes, it was a saying. I would say, “Louder, Harder, Faster’… We should write a song called that. Hey, let’s call the album that.”

Sleaze Roxx: I love the video for that song. Some good humour in it.

Robert Mason: It turned out well. Hey, it’s awesome. It’s tongue in cheek humour. We could have done a performance video. It’s us playing out in the desert, of course in video. Everyone knows you’re not really playing.

Sleaze Roxx: In comparison to past recordings, how did you find this one compared to Lynch Mob, Cry of Love or Big Cock. Was it easy? Hard?

Robert Mason: It was ‘Louder Harder Faster’ [laughs]. It was actually easy. We took our time to crunch out some songs. It was a monumental time. I got along well with producer Jeff [Pilson]. Jeff had all this vintage gear. He had this ’60s Gibson. I was messing around with the solo for “U In My Life.” Three takes later, it was finished. Jeff said “We got it.” Joey [Allen] played his ass off on this album as well. Joey is such an underrated guitarist. I give all the guys the credit that they are due. 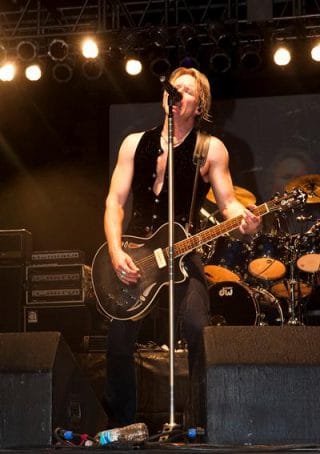 Sleaze Roxx: I mentioned in my review of the album that the song “New Rebellion” had a Mr. Big feel to it.

Robert Mason: Oh that was you? Thank you. “New Rebellion” was Jerry’s bass part with the guitar following along.

Sleaze Roxx: I think so far, my favorite track is “Music Man.” The intro just seems very personal from your standpoint. Did you dig deep into a recollection from your childhood?

Robert Mason: It was telling the story, like “Uncle Tom’s Cabin.”

Sleaze Roxx: That was another thing I mentioned in my review. How Warrant always has a way of writing a good story. “Uncle Tom’s Cabin” and “Dusty’s Revenge” from ‘Rockaholic.’

Robert Mason: Dixon and I came up with that. When you have a thing or a riff, you kind of fill in the blanks. We erased the original demo we had, redid it. We completely changed the song.

Sleaze Roxx: I love the piece at the beginning, where you’re talking to your Mom, and your reply “Yes Ma’am.”

Robert Mason: It is a narrative. I guess I have memories of a homeless guy back in New York when I was a kid. We made it swampy. It’s just Joey and I on a couple guitars on the intro. Just two guys jamming away.

Sleaze Roxx: “Faded” is a great song. Can we talk about the lyrical content? I think the opening line “I look into your eyes, I used to see blue skies”.

Robert Mason: I wrote it and yes it may be a bit trite with the rhyming lyric — in a silly poetic way. Like the “Heaven” line about blue skies, which was ironic. 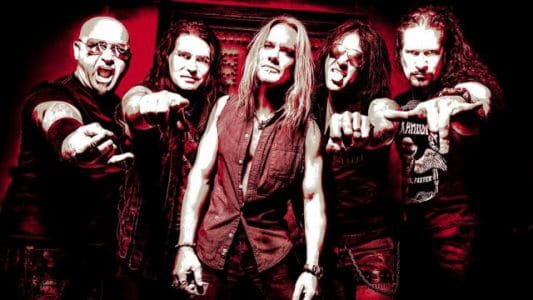 Sleaze Roxx: Kind of like referencing “Jimmy” in “Only Broken Heart.”

Robert Mason: The “Jimmy” thing was something that Warren Demartini or Bobby Blotzer and I would say back in ’98.  “Yo Jimmy”, “Hey Jimmy.” Just Jimmy jokes. So when I brought the lyrics to the band, “Jimmy’s got a rock band,” they all laughed. I had no idea and that’s the God’s honest truth. I had never heard the song. “Jimmy” was a saying you’d say in a barn, as a joke. I guess I should go back and listen to the song.

Sleaze Roxx: Jani [Lane] did it on the Saints of the Underground album and of course it was an old Warrant demo. There is so much unreleased demos on YouTube of early Warrant stuff.

Robert Mason: I haven’t heard a lot of it. Is that bad?

Sleaze Roxx: I don’t think so, I mean it never made albums, so it’s an honest thing.

Robert Mason: I listen to what I grew up listening to — Zeppelin, Humble Pie, etc.

Robert Mason: Yes, he was.

Sleaze Roxx: It seems that people are really gravitating towards “Perfect.” I’ve seen a ton of things online where people are just talking about how great this song is. What can you tell me about this one?

Robert Mason: Oh really? Thank you. Dixon had the music. I came up with the lyrics. It’s a relationship thing. You feel that at any age. You know where you meet someone and say “Holy Hell! I need to go meet that person.” It’s a visual. A total relationship thing. That song came together quickly. When I wrote the lyrics, Jeff [Pilson] made me think about it. On that fifth or third above vocal, I wore tight pants that day!

Sleaze Roxx: Speaking of that type of vocal, “What Love Can Do” from ‘Rockaholic’ has that same type of thing. In the first chorus, you’re singing the lower register, than you harmonize over that vocal line in the second chorus. It’s adds a nice touch. I love that song. 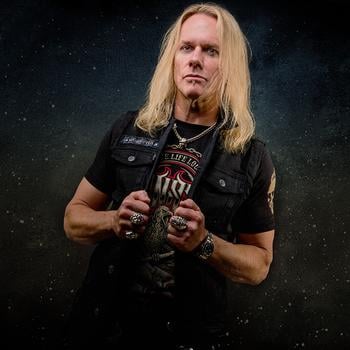 Sleaze Roxx: “Big Sandy” has some humour to it.

Robert Mason: That was a Dixon title. Out of the brain of Jerry. We were laughing in the studio. We were hoping someone got it. We weren’t afraid that it doesn’t fit. It’s a little south of the belt buckle.

Sleaze Roxx: I find the end of the album changes slightly and adds a really nice dynamic.

Robert Mason: Well, we could have just made the songs generic, but we chose to make it a little different.

Sleaze Roxx: I was telling a good buddy of mine, that I had an upcoming interview with you. Jokingly, I asked if he had anything he wanted me to ask you… He said wanted to know, “Why the hell won’t Warrant come to Toronto?”

Robert Mason: We’ve been up there a few times.

Sleaze Roxx: Since you joined the band? No?

Robert Mason: We did “Heavy Montreal”. We also did a corporate event in Toronto the same time as the big film festival. It was crazy up there. I love it, it’s like New York. We have to get back up there.