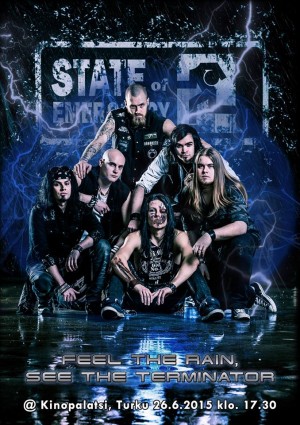 State Of Emergency emanate from Turku, Finland and formed back in 2004.

The band’s short bio on its website states: “Nowadays mainly Turku based State of Emergency is an energetic six-member Rock band originated in the deep forests of Pöytyä. Stage is natural habitat for these creatures and they live and breathe on Rock n’ Roll. SOE knows what the audience wants and they do deliver it 100%. The passion to entertain can be heard and seen on every show.”

The group’s four song EP Freezing Nights And Rainy Days was released back on May 1, 2015 and includes the song “Feel The Rain.”