After guitarist Ira Black announced yesterday that he would be playing nine shows with Dokken throughout the months of November and December 2017, there has apparently been some speculation on the status of guitarist Jon Levin in the band. A recent Facebook post from the Classic Metal Show seeks to clarify Levin‘s status in the band. 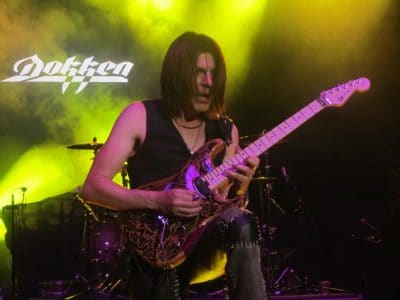 “LISTEN UP DOKKEN FANS: Since most of you assume that any Dokken news must come through Neeley to be official, we have the news about Jon Levin and Dokken.

NO…JON IS NOT LEAVING DOKKEN.

When Jon‘s not out kicking ass with Dokken, he’s beating ass in an LA Courtroom as a lawyer, and he has business in that regard that will require his time for the rest of the year. Neeley spoke directly to Jon yesterday, so this is not heresay…it’s straight from his mouth.

Ira Black, who’s a damn fine player in his own right, will be filling in until Jon‘s legal work has completed.”

Wikipedia states the following in part about Levin:

“Jon Levin was involved with music very early on in life. He began playing piano at age 4, trumpet by age 7, and guitar at age 9. Instead of having formal lessons, Levin played along to his favorite musicians including Randy Rhoads, Eric Clapton and later George Lynch from Dokken, whose place Levin would eventually take. He played in a club band called Devias at age 19 in the Long Island, New York area, and then auditioned for and joined German band Warlock at age 22. When the grunge scene took over in the early 1990s, Levin took a break from being a musician because he wasn’t interested in that type of music. Levin relocated to the West Coast and became an entertainment lawyer. In his capacity as an entertainment lawyer, Jon has served as legal counsel, working with Jim Paidas, of Paidas Management, on a myriad of licensing programs; some of which include Orange County Choppers, Dog the Bounty Hunter, American Hot Rod, and Rockstalgia.”