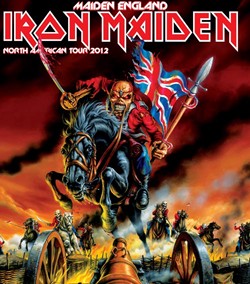 Following the massively successful Final Frontier World Tour 2010-11, Iron Maiden are back on the road this summer with a series of Arena, Amphitheatre and Festival shows in the U.S.A. and Canada, opening in Charlotte, NC, U.S.A. on June 21, and finishing in Houston, TX, on August 18 (dates listed below), to be followed by further dates around the World in 2013. The Maiden Englan World Tour will closely mirror, in terms of production and content, the original 1988 concert video of the same name, shot on the ‘Seventh Son Of A Seventh Son Tour’. This opening section of the World Tour is the band’s most extensive visit to North America for many years and includes a number of cities the band have not played in a very long time, such as Charlotte, Atlanta, Buffalo, Indianapolis and Salt Lake City.

In most venues, tickets will go on sale on March 2 and 3, but watch www.ironmaiden.com or check local venue information for fuller details. Fan Club members should check out www.ironmaiden.com for exclusive first day ticket presales and contest to be ‘First To The Barrier’.

Maiden England marks the third chapter in the History of Iron Maiden, a journey which began in 2004 with The Early Days DVD and subsequent 2005 Early Days Tour. Part Two followed in 2008 with the Live After Death DVD – the seminal 1984 concert recorded at Long Beach Arena (L.A) during the World Slavery Tour – and the band embarking on their groundbreaking Somewhere Back In Time World Tour 2008/9, which saw them play to over two million fans in almost 40 countries.

Comments vocalist Bruce Dickinson, “We have great fun playing the History of Maiden Tours because it gives us an opportunity between new albums to go out and play songs from our earlier catalogue. It’s always fantastic seeing the crowd reaction from a new generation of fans who have never experienced some of these tracks performed live before, and of course we know our longstanding fans will enjoy seeing the original Seventh Son Tour re-visited – with many other surprises! Our intention is to play about two thirds of the original track list of Maiden England (shown below), including some songs we have not played live in a very,very long time, plus other favourites we just know the fans are going to want to hear! We always try to give our fans a great show musically, but we have always tried to make it as entertaining and memorable an experience as we can visually. And we all feel this show is going to do that splendidly! We can’t wait to get started in Charlotte”.

Iron Maiden are delighted to announce that the extraordinary and legendary Alice Cooper will be their Very Special Guest on all shows up to July 21. After that date, Special Guest will be Coheed and Cambria, the inspiring, cutting edge band from New York.

Iron Maiden continue to be actively dedicated to ensuring their fans always have full access to the best possible tickets in the fairest possible way. Manager Rod Smallwood comments, “We are trying to ensure that our fans get the tickets they want in the prime positions without paying over the odds to ticket scalpers. Maiden get infuriated with the way fans sometimes have to pay more than the ticket price to get good positions at our shows. So we will, wherever possible (Festivals excluded), with the assistance of the Promoters, arrange a paperless ticketing system at least for the front sections to try to eliminate as much of the ticket scalping and exchanges as we can. We put this into practice on our North American Tour in 2010; it worked well and we received many positive comments back from our fans, so we intend to increase this where feasible. With paperless ticketing, only those who actually pay initially for the tickets will get into the show so scalping is generally avoided (please see the comments from Ticketmaster below). We are also doing everything we can to avoid any drain of prime tickets going to the Secondary Ticketing sites which we feel make unfair profits from music fans.

As we consider all our fans to be VIPs, no tickets will be held specifically for VIP use. At some venues, the Promoter may provide the option for fans to pay extra for “VIP Parking”, early access, access to “VIP Bar” etc. But these will be purely optional for ticket holders only and will not be tied to ticket locations – the ability to get the best tickets should be the same for everybody outside of the usual presales.

Finally, we are of course once again arranging exclusive ticket pre-sales for our fan club members so they can be quick off the mark for great tickets and will also continue to run the contest in appropriate venues for fan club members so they can be ‘First To The Barrier’ prior to the show. We hope that these measures will help our fans as much as possible and ask that they keep checking for details on our website.”

Ticketmaster comments, Where possible the North American Iron Maiden shows will operate a paperless ticket policy. Select tickets will be sold via Ticketmaster’s Paperless Ticket delivery, which means fans will not receive a physical concert ticket for their entry into the event. Buying paperless helps ensure fans have secure and convenient access to event tickets at the intended original sale price. On the day of show, concert goers just need to bring the credit card they used for the ticket purchase and a government-issued photo ID to the concert. All members of the ticket purchaser’s party must be present at the same time to enter the venue. The venue’s ticket usher will swipe their credit card upon entry and present each person in their party with seat locator slips for quick access into the show. To purchase paperless tickets or for more information, fans should visit www.ticketmaster.com/paperless or call the Ticketmaster charge-by-phone number at 1-800-745-3000.

Maiden England 1988 Longform Video VHS Tracklisting – Moonchild, The Evil That Men Do, The Prisoner, Still Life, Die With Your Boots On, Infinite Dreams, Killers, Can I Play With Madness, Heaven Can Wait, Wasted Years, The Clairvoyant, Seventh Son Of A Seventh Son, The Number Of The Beast, Hallowed Be Thy Name, Iron Maiden.