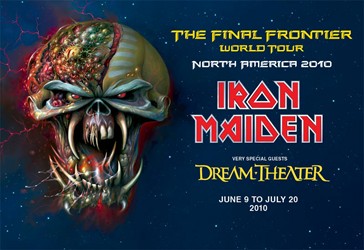 Metal legends IRON MAIDEN have revealed the title of their new album, THE FINAL FRONTIER and details of their highly anticipated 2010 North American tour, announced Live Nation today. With 22 dates confirmed, the Live Nation promoted tour will open in Dallas, Texas, on June 9 and finish in Washington D.C. on July 20, making it their most extensive North American tour in many years. (Full confirmed dates below.)

The new album is expected to be released in late summer and following the North American tour, the The Final Frontier World Tour will continue to Europe for a few select major festival and stadium shows.

From their self-titled debut via their worldwide breakthrough album “The Number of the Beast” to the most recent masterpiece, “A Matter of Life and Death,” for over the last 30 years at the forefront of Metal, Iron Maiden have influenced everyone from massive acts such as Metallica, Anthrax and Slayer to aspiring metal stars Mastodon, Bullet for My Valentine and Trivium, while selling over 80 million albums and packing out arenas and stadiums Worldwide. Renowned for their spectacular stage sets and uncompromising musicianship, during their 08-09 “Somewhere Back in Time World Tour” alone they headlined in an astonishing 38 countries to two million fans. As vital and exciting as ever, Maiden never fail to put on the best possible show for their fans and give even the biggest stadium the atmosphere of a club show with their intense communication with an audience.

Says vocalist Bruce Dickinson, “We really wanted to get out and play some shows before the release of the new album later this year, so we thought what better way to kick off the tour than by going back to Canada and the USA where fans gave us such a fantastic reception during our last tour in 2008! We were astounded to see so many thousands of fans packing out the venues, so this time round we will be playing a few more cities we haven’t visited for some time, like Dallas, Saskatoon, Detroit, Denver and Pittsburgh, though logistically we couldn’t get to a few places we really like to play, which is a shame. It’s also great news that our friends DREAM THEATER are able to join us as special guests.”

“We’re still working on the set list for these summer shows, but this time it will cover the whole history of the band, and I can hint that we will be playing a taster from the new album. We already have the designs for the new Final Frontier stage show which we are building to bring out with us, so this summer tour will be a bit of a preview for the fans. It’s certainly looking very spectacular at this stage and with a brand new Eddie and an amazing light show!”

“We are also trying to ensure that our fans get the tickets they want close to the stage without paying over the odds to ticket scalpers. This is something our manager Rod is working hard on so we hope to see many more familiar faces down the front having a great time. We will see you all soon”

Continues manager Rod Smallwood: “Like all bands, Maiden get fed up with the way fans sometimes pay more than the ticket price to get good positions at our shows. So we are trying, with the assistance of Live Nation and wherever possible subject to venue facilities, to arrange paperless ticketing at least for the front sections to try to eliminate as much of the ticket scalping as we can. Basically, with paperless ticketing, only those who actually pay for the ticket will get into the show so they are useless to scalpers. Furthermore, we are once again arranging ticket pre-sales for our fan club members so they can be quick off the mark for great tickets and will also continue to run the first to the barrier in appropriate venues for fan club members so they can enter a contest to be at the barrier prior to the show. We hope that these measures will help our fans as much as possible.

For our fan club members the tour will also see the return of IMTV on our website www.ironmaiden.com, which has regular footage for the live shows, touring, band interviews, insights into our crew and what they do and much much more, along with the diaries, exclusive photographs and anything else that helps our fans get a real insight into the dynamics of a big tour”

Dream Theater’s Mike Portnoy comments, “Touring with Iron Maiden in North America is a bit of a dream come true for us! After 25 years together, at this stage in our career there’s honestly only three bands Dream Theater would consider opening for…and Maiden is one of them! It is an absolute honor. Through the years, we’ve done many one-off shows with Maiden and they’ve almost all been overseas..so it is very exciting to finally be doing a full tour with them…and on our side of the pond no less!!! The tour visits regions in the US – like Texas and the South-West – that we haven’t played in many years, as well as some Canadian cities that have rarely if ever had the chance to see Dream Theater so it’s very exciting for us to get to play for our fans in these places. This is gonna be an amazing show that the fans won’t wanna miss….Up The Fucking Irons!!”

An exclusive pre-sale allowing members of the Iron Maiden fan club first access to the tickets will be made available three days prior to the public on sale date. Full details of this can be found at www.ironmaiden.com along with details of FC contests for First to the Barrier.

As part of Iron Maiden’s on-going effort to ensure their fans always have access to the best possible tickets at the fairest possible price, paperless tickets will be offered for select shows. Additional information can be found on the participating venue’s ticketing page at LiveNation.com.