Iron Maiden guitarist Adrian Smith was recently interviewed by Eamon O’Neill for the UK website eonmusic. Smith was promoting his first book Monsters of River and Rock: My Life as Iron Maiden’s Compulsive Angler, which will soon be released via Random House.

The long-time Iron Maiden guitarist had his first stint with the band from 1980 to 1990 and has been enjoying his second run with the group ever since 1999. 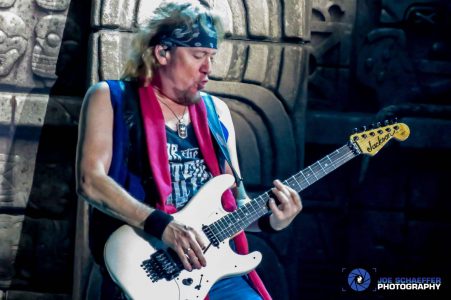 The tight lipped guitarist was asked whether he was in contention to join Def Leppard after the band was looking for a replacement to replace Steve Clark who died back on January 8, 1991. That guitarist spot in Def Leppard was eventually filled by Vivian Campbell (Dio, Whitesnake, Riverdogs, Last In Line) in 1992.

Smith also spoke about the song “Stranger In A Strange Land” which appears on Iron Maiden‘s album Somewhere In Time as he stated: “Yeah. I’ll tell you, we used to rehearse in the Channel Islands in Jersey, and I was on my way to get a root canal done, and I was on my way back and my face was throbbing, and it was pouring with rain, I was looking out at the sea out of the back window of the cab, and that riff popped right into my mind. And, I couldn’t wait to get back to my hotel. We had the whole hotel to ourselves, we had the gear set up and everything, and I worked the riff out and it all went from there. The story [of the exhumation of the body of explorer John Torrington, almost perfectly preserved in permafrost after over a century] was in the paper. It was just kind of a very moving story, and it went perfectly with the riff; this kind of desolate, kind of wasteland, and this sense of loss of hope, and it all sort of goes from there.

You know, my playing, I like to think, I try and feel stuff, and I like the space to play in it, and that was probably one of the first song’s I was able to do that, on that album, because a lot of the Maiden stuff up until then had been very fast, and aggressive, and heavy, but that actually allowed me a little bit of space to stretch out a bit. It was nice, you know. So you’ve got more scope in the writing then.”

In terms of why Iron Maiden rarely play the song in a live setting, Smith indicated: “I would. It’s difficult to put it in a set because unless we do really fast stuff live, or we do very slow dramatic stuff; anything in the middle just has a sort of a mid-tempo from beginning to end, and the tempo of the song is crucial for ‘Stranger’. We tend to race with a lot of our songs, and most of it, it doesn’t matter – it just adds to the excitement – but with that song, with the energy, sometimes it can get… it’s hard to play live, you know?”

You can read the rest of the interview with Adrian Smith by Eamon O’Neill at eonmusic‘s website.