It appears that Iron Maiden guitarist Adrian Smith‘s autobiography will be released via Random House in May 2020. 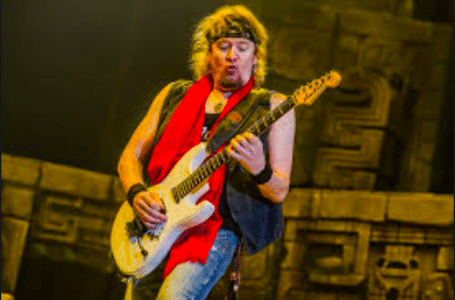 There are few details so far but the book appears titled Monsters of River and Rock: My Life as Iron Maiden’s Compulsive Angler and to total 288 pages.

The book is advertised on a number of websites including Google, Adlibris, Lehmanns and various Amazon sites.

Wikipedia states the following in part about Smith (with slight edits):

“Adrian Frederick “H” Smith (born 27 February 1957) is an English guitarist and member of Iron Maiden, for whom he writes songs and performs live backing vocals on some tracks.

Smith grew up in London and became interested in rock music at 15. He soon formed a friendship with future Iron Maiden guitarist Dave Murray, who inspired him to take up the guitar. After leaving school at 16, he formed a band called Urchin, which he led until their demise in 1980. He joined Iron Maiden in November 1980, replacing Dennis Stratton. Following a short-lived solo project called ASAP, he left Iron Maiden in 1990 and formed a group called Psycho Motel. In 1997, Psycho Motel was put on hold and he joined the band of former Iron Maiden singer Bruce Dickinson. Smith and Dickinson returned to Iron Maiden in 1999, after which the band gained new success. Smith has a current side project called Primal Rock Rebellion.”